Best things to do in Cape Town, South Africa

Cape Town is a visually stunning city. Hugged by the blue Atlantic, with Table Mountain for a backdrop, there are beautiful views wherever you go. But don’t spend too much time gazing at the scenery—Cape Town is a cultural hotspot, too, with world-class museums and historical sights. Shopping opportunities (from African handicrafts to the latest Gucci gear) abound, and the thriving food scene is wonderfully diverse.

Check out these 10 incredible things to do in Cape Town. 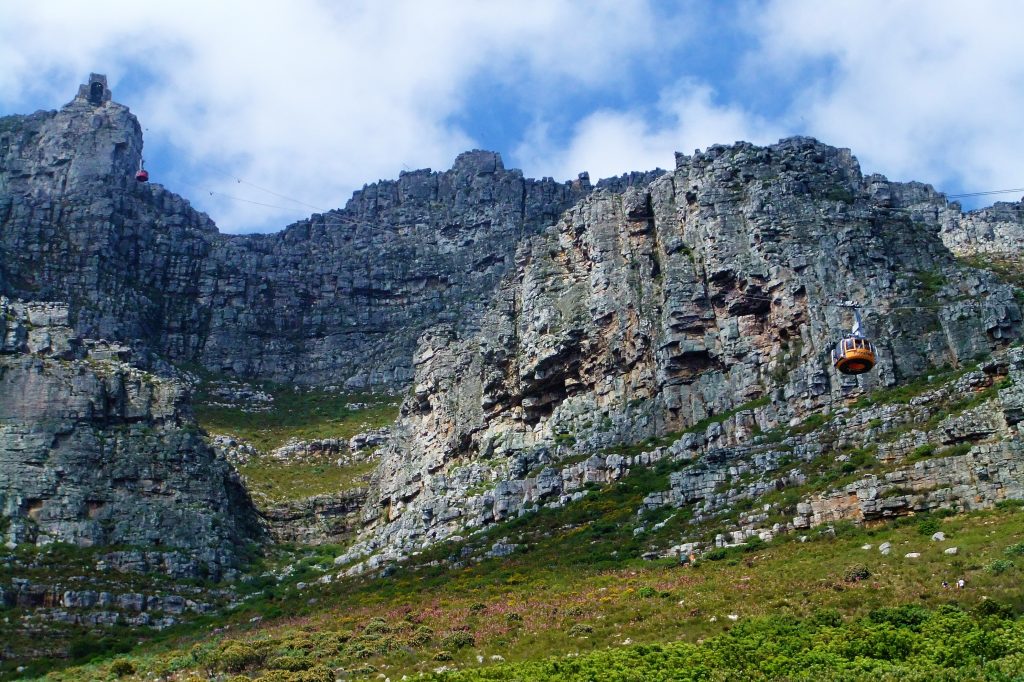 Cape Town’s most famous icon, and one of the new 7 wonders of the natural world, Table Mountain is at the top of every tourist’s itinerary. But that doesn’t necessarily mean it’s the first place you should go. To experience Table Mountain at its best, timing is essential. When clouds roll in, covering the summit in a “Table Cloth” you won’t get much of a view. Wait for a sunny day and hike or take the cable car up—the whole magnificent city will be visible and you’ll even see Robben Island.

Dress warm—the gift shop makes a fortune selling jackets and hoodies to people who show up woefully underdressed. Plan to spend at least a couple hours hiking amongst the unusual rock formations and vegetation. Watch for rock hyraxes, or dassies. They’re cute and furry, but shouldn’t be petted. They have teeth, and won’t hesitate to use them! 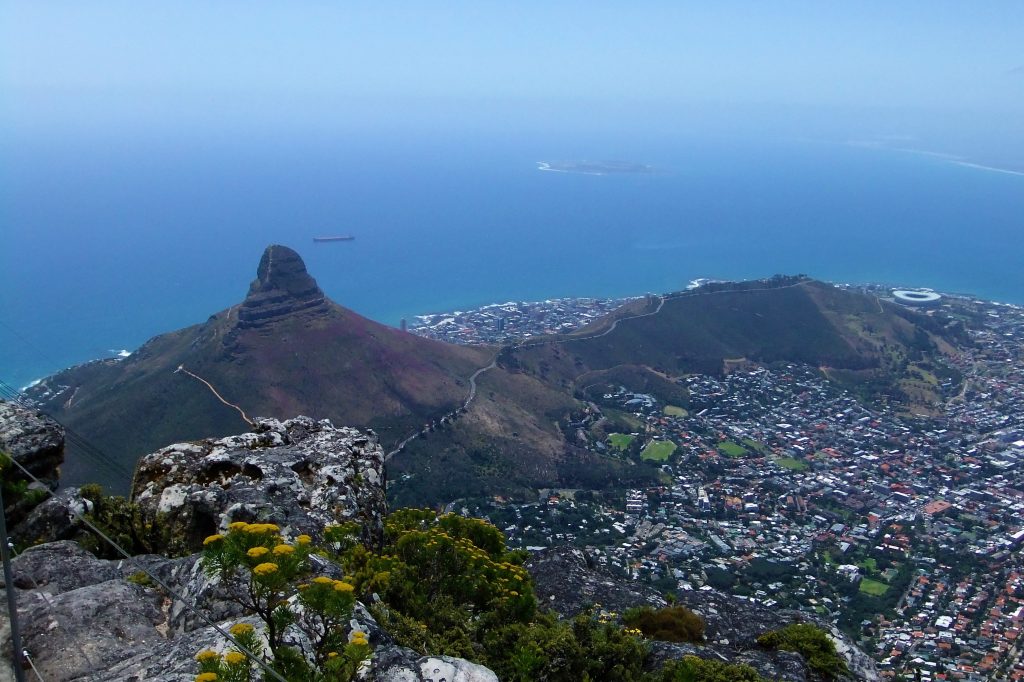 From atop Table Mountain you’ll see another mountain—shaped like a reclining lion—right in the middle of the city. The peak is Lion’s Head and the other end is Lion’s Rump, or Signal Hill. There are no cable cars on Lion’s Head, but the hike to the top only takes about an hour and a half. Hang-gliding, from either the upper or lower launch, is excellent here.

You can drive up Signal Hill, a popular spot to watch the sunset. It’s also home to Cape Town’s famous Noon Gun. Every day except Sundays and public holidays, at exactly noon, one of two Dutch guns (18-pounders) is fired. The guns are operated by the South African Navy and are the oldest (dating to 1794) in daily use anywhere in the world. They’re loud, so be prepared. 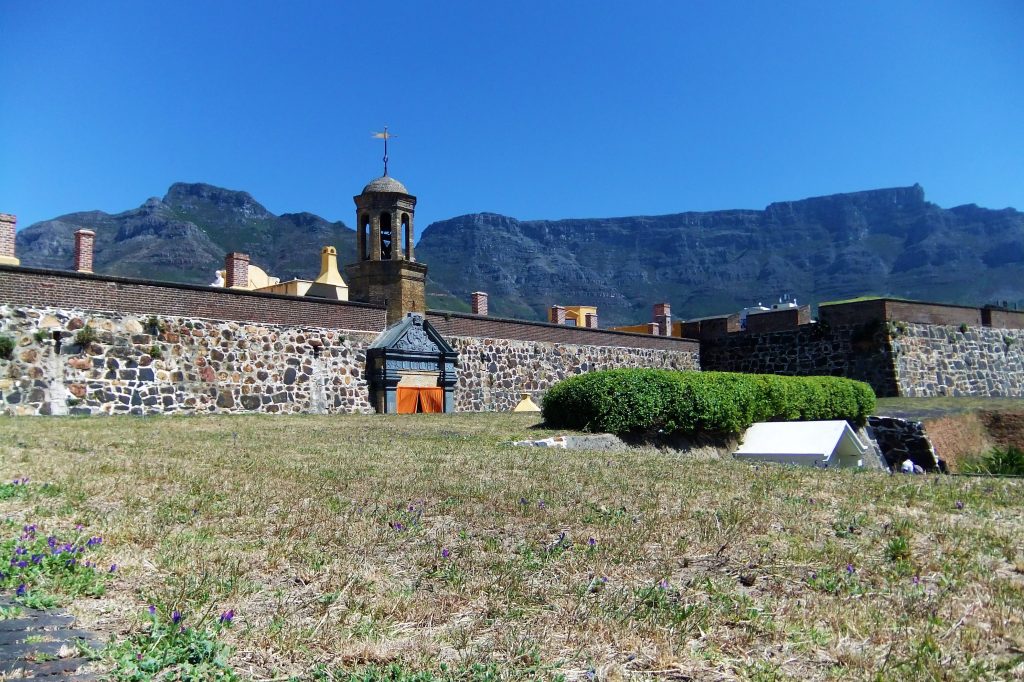 The guns that are now on Signal Hill were originally shipped from Britain to South Africa in 1795 to defend this fortress. Completed by the Dutch East India Company in 1679, it’s the oldest colonial structure in South Africa. Though the fort is a functioning military base (the Cape Town Highlanders Regiment is stationed here), it’s open to the public for a small admission fee. Inside, you’ll find a military museum displaying the weaponry and uniforms of the Dutch and British troops who manned the castle’s bastions over the centuries. You can also tour the torture chamber, Governor’s Quarters, and other rooms. 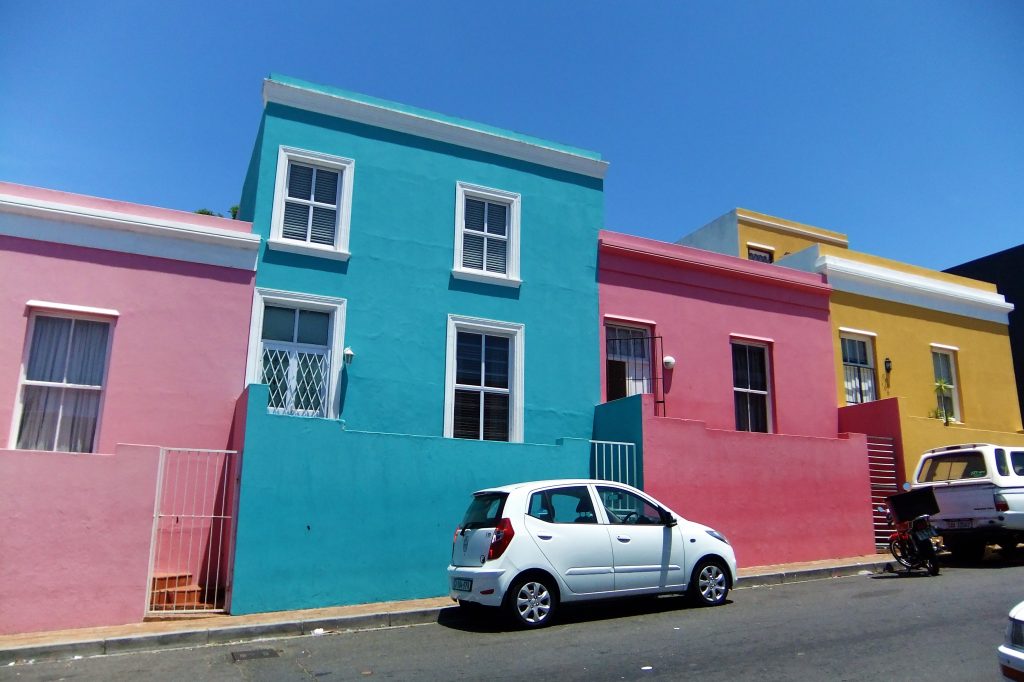 Cape Town’s most colorful neighborhood was originally home to Muslim slaves from Malaysia and Indonesia. Today, about half the residents remain Muslim, and the cobbled streets are rife with historic mosques. Check out the small Bo-Kaap Museum to learn about how the neighborhood has changed since 1763.

My favorite thing to do in Bo-Kaap is eat. Cape Malay cooking fuses Dutch and various Asian traditions to create unique dishes like bobotie (spiced meat, egg topping) and bredie (lamb stew).  For a nice selection of curries, try Biesmiellah Restaurant on the corner of Wale and Pentz streets. 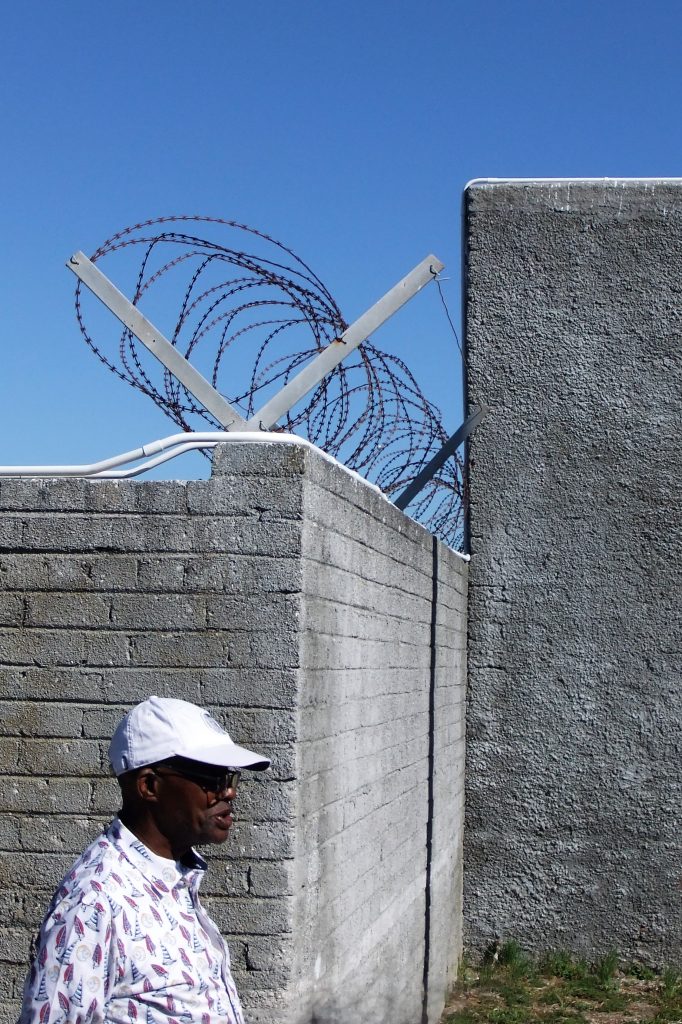 South Africa’s policy of racial segregation, Apartheid, lasted from 1948 to 1994, when Nelson Mandela was elected president. Mandela had spent the previous 27 years as a political prisoner, 18 of them on Robben Island. Book a tour of the notorious prison at the Nelson Mandela Gateway on the V & A Waterfront. After a 5.5-mile ferry ride, you’ll be shown around the prison by a former inmate, who’ll explain what life was like inside the compound.

A bus will then take you to other points of interest: limestone quarries where prisoners worked, a lepers’ cemetery, and a village built during World War II when the island was a military base. You’ll see plenty of nature, too. I crossed paths with a massive mole snake, an angulate tortoise, and a small colony of African penguins. 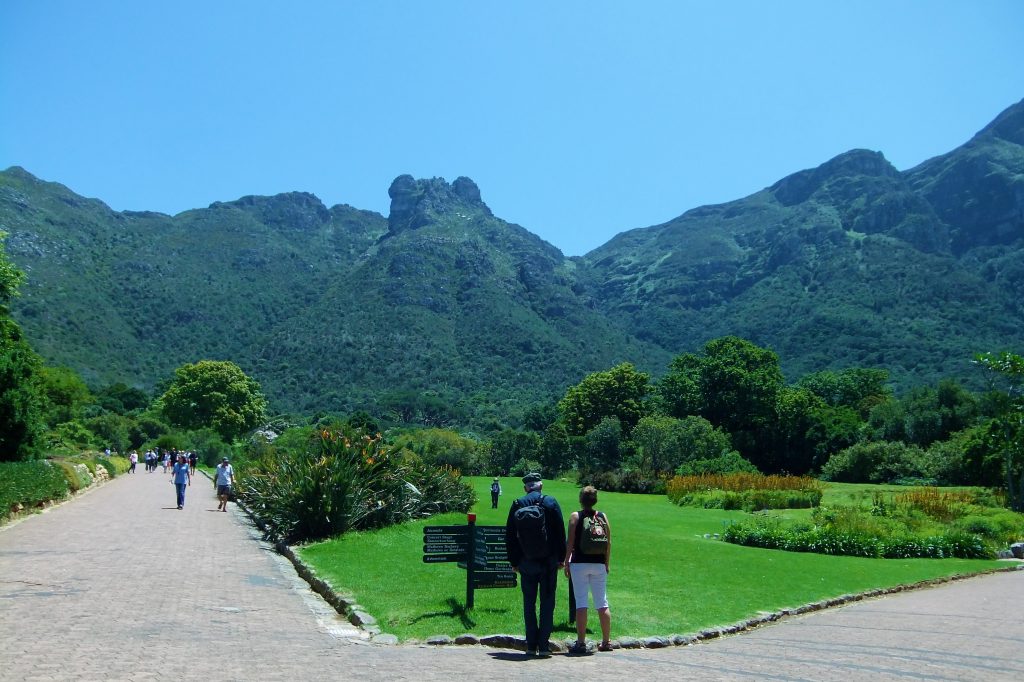 The Cape Floral Region is the smallest of the world’s 6 floral kingdoms, but this 30,330 square mile area, located entirely within South Africa, supports an amazing array of plants, 69% of which exist nowhere else on earth. You can see many of these endemic fynbos, proteas, and ericas in the world-renowned Kirstenbosch Gardens on the slopes of Table Mountain.

The gardens are a paradise for birdwatchers, too. I’ve photographed cape sugarbirds, wild partridges, orange-breasted sunbirds, even a spotted eagle owl. The owl was roosted in a tree just below an elevated walkway known as the Boomslang, which passes through the forest canopy. 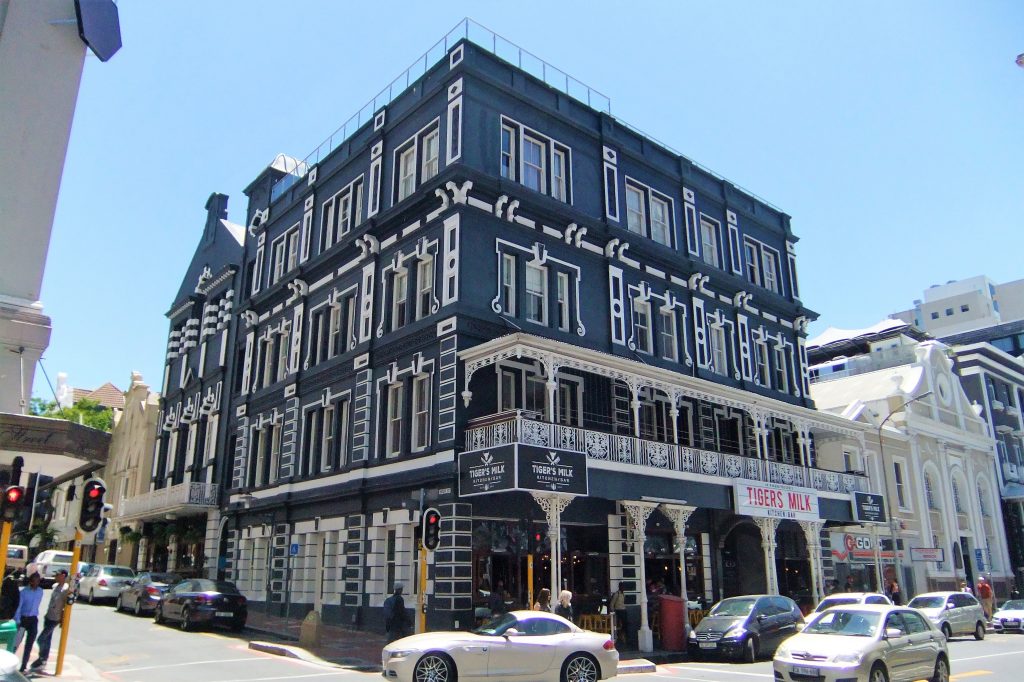 This popular street in Cape Town’s central City Bowl area is chock-a-block with bars, restaurants, and shops. You can buy books, handicrafts, clothes, and electronics; eat a variety of ethnic foods; drink at an Irish pub or hipster lounge. I like the food and booze specials at Tiger’s Milk, a South African franchise located in a historic building filigreed with wrought iron. Tuesdays are two-for-one tacos, and select drinks are BOGO daily at Happy Hour (4 to 6 pm). They brew their own line of craft beers, too. Try the Tiger’s Milk Lager.

Things can get a bit rough on Long Street at night, especially around clubs. Be alert and go out in a group. 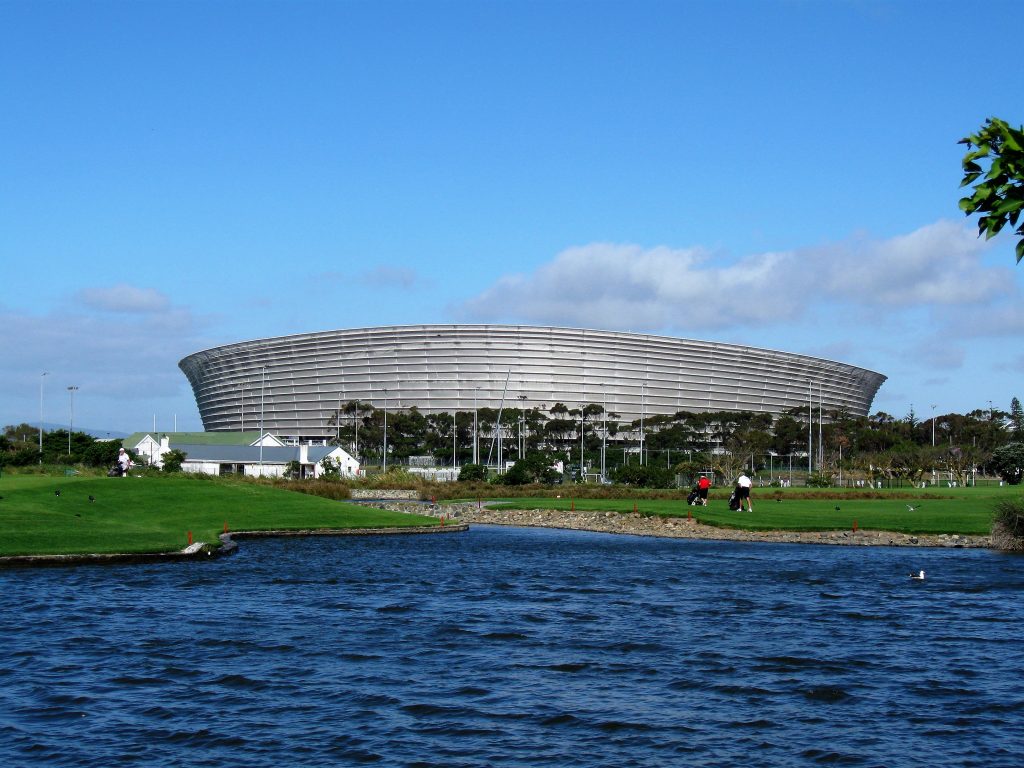 If you watched the 2010 World Cup, you probably remember this stadium and the distinctive drone that emanated from it. That sound was produced by a plastic horn called the vuvuzela. Whether you find them entertaining or annoying, they are a major part of the South African soccer experience. I sat next to a kid blasting on one during a Cape Town City/Highlands Park match, and have to say I was impressed. He managed to communicate quite a range of emotions, from disappointment (vluurrp) to ecstasy (vlooooor!)

Tickets to Cape Town City and Ajax Cape Town matches are super cheap, so don’t miss the opportunity to hear a vuvu in its native environment. 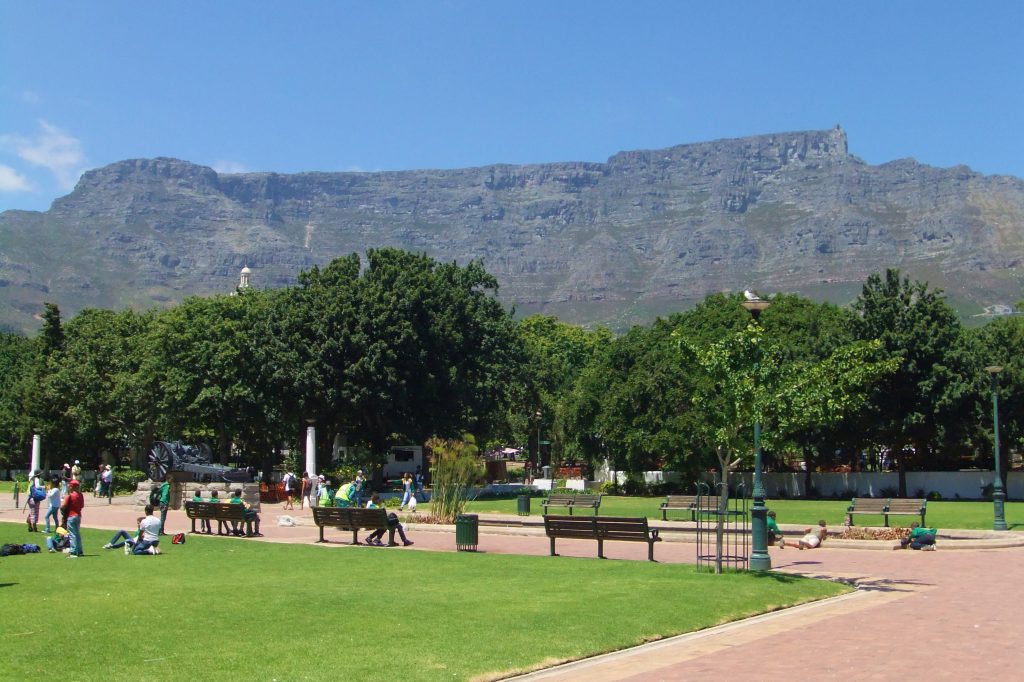 Lots of statues decorate the landscaped grounds, and there are two museums (Iziko South African and the National Gallery). Nature fans will find a variety of birds, some in the aviary, others, like the resident Egyptian Geese, waddling around in search of food. There’s a fish pond, too.

The Company’s Garden Restaurant is open through the afternoon and is a shady, comfy spot to have breakfast, tea, or lunch. If you’re looking to try some Cape Malay food, they do a great sampler platter. 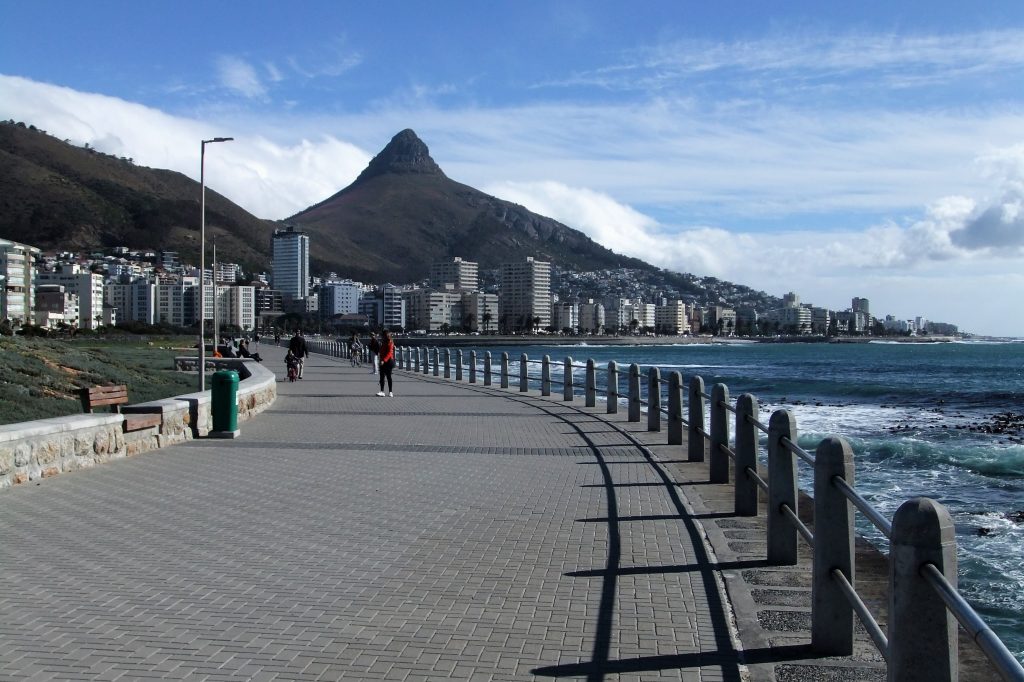 You can walk (or bike, or skate, or whatever) along the Atlantic seaboard for 7 miles on the Sea Point Promenade, but be careful with your headgear. Cape Town can get insanely windy, especially in summer, and you can lose a hat in an instant. If not for the intervention of a well-placed bench, mine would be somewhere off the coast of Namibia right now, drifting along in the Benguela Current.

You’ll find lots to do along the prom: Green Point Lighthouse, mini-golf, an outdoor gym, and an Olympic-sized pool. In the summer there are regular tango and salsa dancing get-togethers, and locals swear the sunsets are the best in the world.

If you move beyond Cape Town, read these tips for traveling on a budget in South Africa.