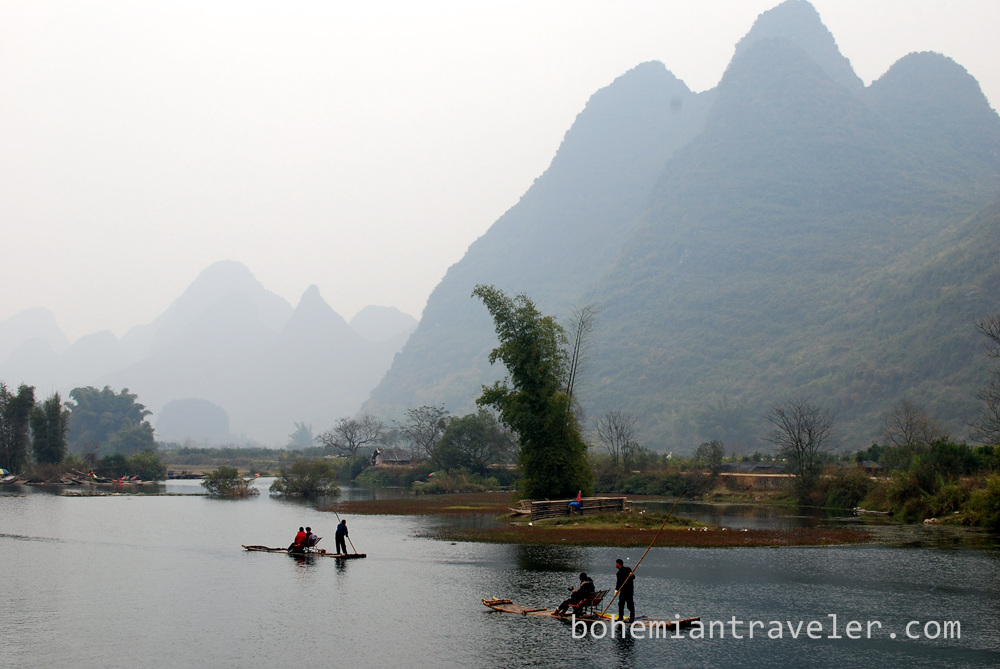 View of the Yulong River from Dragon Bridge

The karst surrounding Guilin in southern China is famous throughout the world. These limestone mountains have been immortalized in Chinese scroll painting and on the back of the 20 Yuan bank note (used by one-fifth of humanity). Many travelers and tourists prefer to base themselves in the smaller Yangshuo, about an hour to the south, opposed to Guilin.

Yangshuo is a city of about 300,000 situated right in the landscape that has made the region so celebrated. A plethora of accommodation and eateries make Yangshuo a comfortable play to situate oneself, while getting out to see the countryside.

Yangshuo, however is noticeably touristy—with its showy pedestrian avenue, West Street (Xi Jie)—overloaded with souvenir stalls, restaurants, overpriced coffee shops, and clubs. West Street is where most Chinese tourists promenade and dance at the clubs until the morning hours. Guihua Lu, on the other hand, is where the foreigners tend to while away the afternoons drinking coffee and the evenings with beer.

Getting out of Yangshuo

The best thing to do in Yangshuo is to get out. There are plenty of walking and cycling opportunities in all directions surrounding town. Rock climbing and bamboo rafting are also extremely popular. There are additional guesthouses in the villages surrounding Yangshuo, so consider those as an alternative to the mega-touristy Yangshuo. 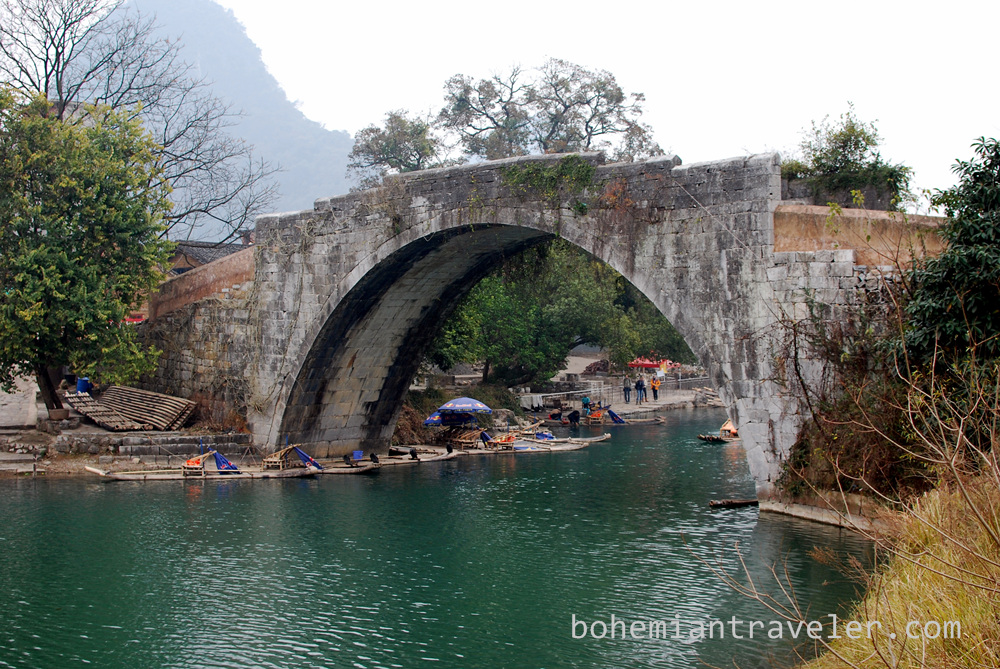 One of the favorite cycling routes around Yangshuo is along the Yulong River. From Yangshuo you’re looking at a flat, relaxed 20 km, 4-5 hour round-trip to Dragon Bridge. Just head out of town toward the village of Jima and head up river on either side. It’s not easy to find the exact way because there are lots of dirt tracks, but at the same time, it’s hard to get lost. You’ll wind your way past villages and farms while soaking up the scenery. The highlight is the 600-year old arched Dragon Bridge. See some of my photos from cycling around Yangshuo.

Rafting is another popular way to see the landscape of Guangxi. Most popular is the route on the Li River from Yangdi to Xingping, but it’s also possible to hire a raft on the Yulong River as well. The trip takes about an hour and costs 118 CYN (18.75 USD). On this route the river passes some of the finest views in the region, including the view (somewhat exaggerated I might add) on the 20 Yuan note. As an alternative to rafting, you could consider the more expensive, bigger river boat all the way from Guilin to Yangshuo. See some of my photos from rafting on the Li River. 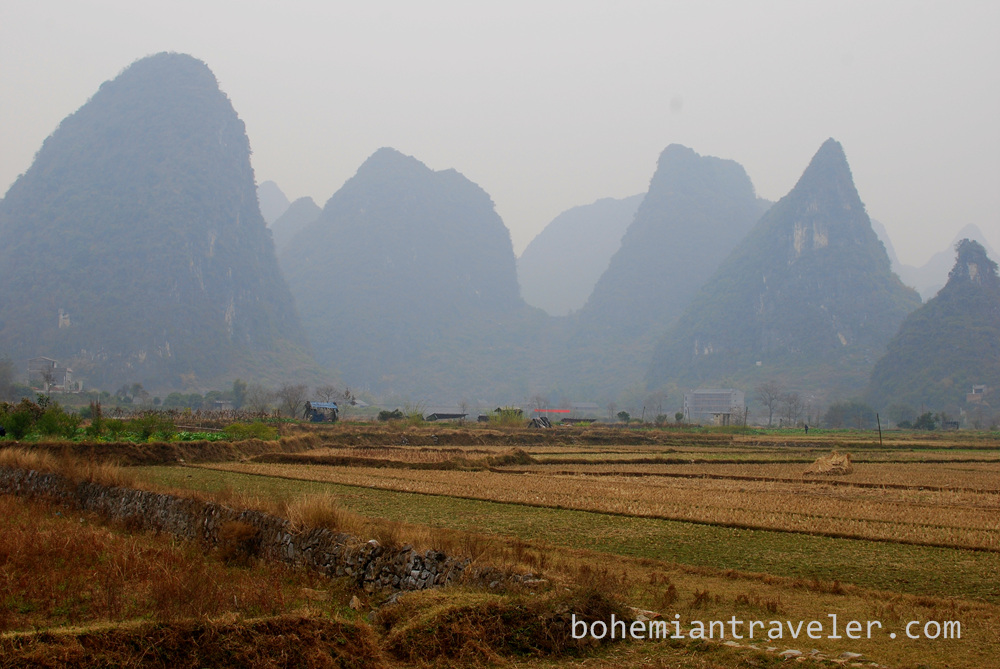 View of the limestone mountains around Yangshuo

Walking opportunities abound in the vicinity of Yangshuo. The above mentioned cycling route can also double as a walking itinerary. Moon Hill is another stop that shouldn’t be missed. It’s a hill about 8km from town with a moon-shaped hole in it. After a 40-minute hike to the top, expect fantastic view in all directions. Admission: 15 CYN (2.40 USD).

The raft trip from Yangdi to Xingping also follows the way of an excellent hiking path, about 16km in all. It takes about four to five hours and includes three river crossings.

If you have to linger in Yangshuo

Half the battle of not getting frustrated with Yangshuo is knowing which businesses to patronize and which to avoid. It took me a few days to figure out which cafes serve good local food at a reasonable price. Gan’s Noodles, for example, was one of our or go to spots for Beijing-style noodles and dumplings. Their small shop is located on the right-hand side about a kilometer out of the center on the main road to Guilin.

Another nice local joint is Little Bull, located next to Clay Pot Rice where Guihua Lu meets Diecui Lu. The chef, Harry, trained under an Australian in Shenzhen for seven years and now came back home to set up this café of local specialties. I helped made a video with Runaway Juno of him making beerfish, a Yangshuo specialty. 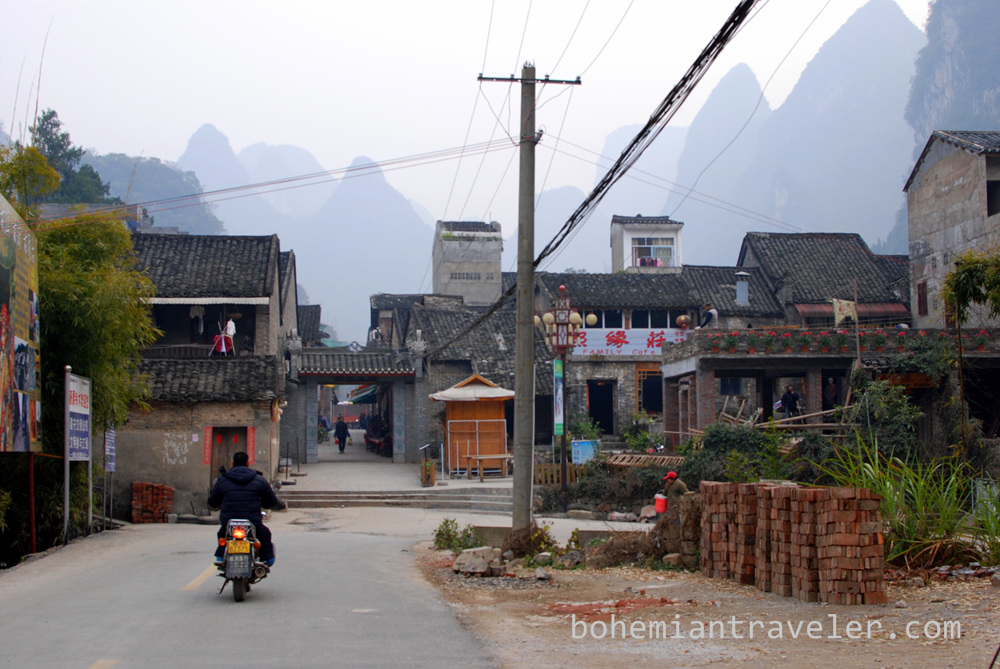 The town of Xingping

There is a plethora of accommodation in Yangshuo that caters to budget travelers on up, so you shouldn’t have any problem finding a cheap dorm bed or private room. Dorm beds start at about 4 USD and doubles from 10 USD. Try to avoid staying on West Street because of the load music blasting out from the clubs.

Better yet, try to find accommodation out in the countryside. Staying at a place like the Giggling Tree, a Dutch-run country guesthouse is a fantastic, quieter alternative to staying in Yangshuo.

Check out some more great photography of Yangshuo on Art of Backpacking.