Western Australia covers one third of the landmass of Australia, and if the state was an independent country, it would be the tenth largest in the world. The state of WA is sparsely populated and, apart from the capital city of Perth, often overlooked by travelers in favor of the better known east coast.

Western Australia has a diverse range of natural environments, as you’d expect from such a vast region, from the Kimberley in the north, through deserts harboring amazing rock formations like Wave Rock, and gold mining country around Kalgoorlie-Boulder, to the charm of the south east coast towns and some of the world’s tallest trees in the forests near Walpole. Western Australia’s tropical coast has remarkable coral reefs, where diving and snorkeling are on a par with the Great Barrier Reef.

One of the nicest aspects of WA is that when you find an incredible beach or a great open road, you can often have it to yourself.

The town of Esperance lies on the south coast of Western Australia. Offshore are the islands of the Recherche archipelago, containing the fantastic Lake Hillier, a lake that’s bubblegum pink in color. Easier to access are Esperance’s own beautiful beaches – miles of soft white sand lapped by clean blue surf – and salt lakes.

Esperance is remote; by public transport it’s a ten hour bus journey from Perth, and you could expect the same route by car to take over seven hours. The destination is well worth the time spent getting there though. Esperance is set on a vast white sand bay, and washed by the cold clear waves of the Southern Ocean. You can walk along the beach to the picturesque local fishing spot of Bandy Creek, or head north out of town to the salt lakes.

Pink Lake is the larger of the two salt lakes, and is no longer pink in color. You can get down to the ground level of the lake and walk on crunchy, sandy salt, where the lake horizon shimmers in the distance and the water is transformed into a mirror of the sky.

The real gem of this area is Cape Le Grand National Park. Less than an hour’s drive from Esperance, the park is one of the few places in Australia where you can see kangaroos on the beach. The park’s rugged wilderness is fringed by vast stretches of pristine white beach and picture perfect coves.

The ocean here is almost unbelievably bright blue and transparent, ranging from pale ice blue to azure and green according to the depth of the water.

The highlight of the park is Lucky Bay. You’ll feel lucky from the moment you arrive, and look out over an immense curve of the softest white sand and the brightest blue water. The bay is surrounded by bush, and kangaroos – often a mother and joey – come down to feed among the seaweed and graze the bush just behind the sand.

However the national park is more than just Lucky Bay. Frenchman’s Peak makes for an invigorating hike and gives a great view out over the coast and the rest of the park. Delightful Thistle Cove has a lovely, sheltered beach and its rock formations provide an opportunity to see some typically Australian geology. The boulders and sheer red rocks here are buffeted by awesomely powerful wind and wave action.

Le Grand Beach is the first beach inside the park. This is a vast stretch of beautiful coastline, with seemingly endless white sand. You can drive down on to the beach here if you have a four wheel drive.

The landscape behind the beaches is magnificent, wild, coastal bushland. Cape Le Grand National Park is a place where you get to experience amazing Australian nature, without any crowds. On my recent trip to Australia I also visited the Great Ocean Road in Victoria, and that experience was very different to Esperance and Cape Le Grand. The undeniably beautiful coastline of the Great Ocean Road is well known, and certainly on the tourist itinerary. This means that while it’s an incredible place to see, the enjoyment factor is affected by the tour groups and the sheer number of visitors to that area. In Western Australia I never felt that. Driving from Esperance to Cape Le Grand National Park we passed only a couple of other cars, and on the beaches there were only a handful of other people, scattered over the vast distances.

How to get to Esperance, Pink Lake, and Cape Le Grand National Park

A bus for Esperance leaves the TransWA bus terminal at East Perth station three times a week. It’s not cheap at around AU$95 one way, but independent travelers can get a 10% discount on all TransWA services (buses and trains) with a YHA or VIP Backpackers card.

Once in Esperance, you can hire a car locally for a day or two to visit Cape Le Grand National Park. It’s also possible to hire bikes and cycle to Pink Lake on the outskirts of town. You can hire these from the YHA among other places; the bike ride is uphill in places but the road isn’t busy.

When it’s time to move on from Esperance, the town is connected by bus routes to Albany and Kalgoorlie as well as to Perth. If you have your own vehicle, you could also make your way to or from Esperance via Wave Rock or Walpole.

For accommodation in the area, see these hotel deals in Esperance. 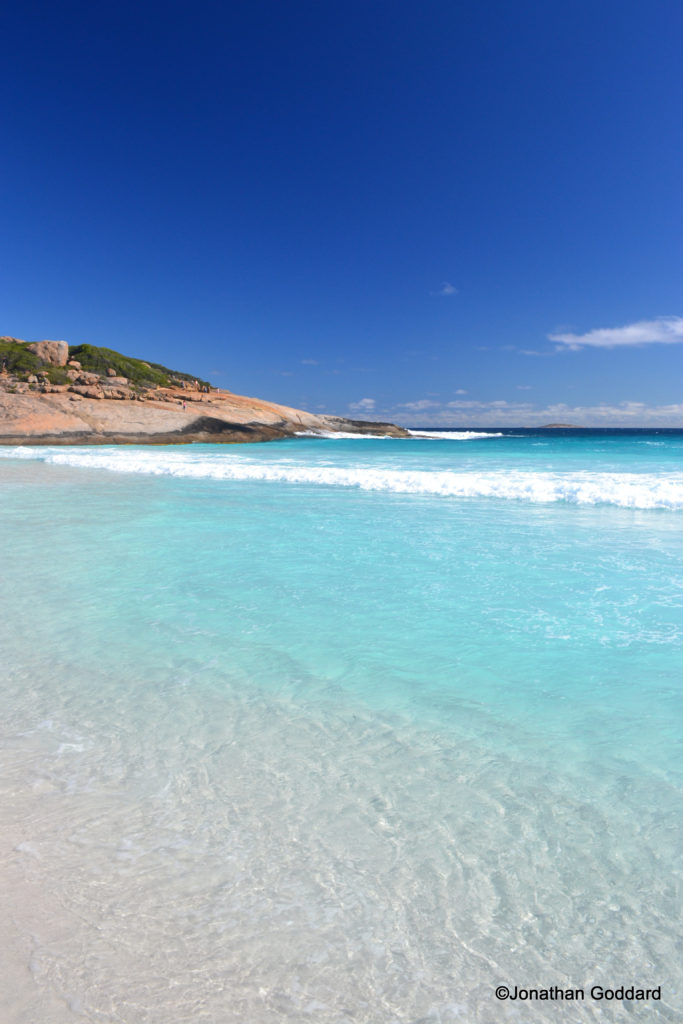 All photos by Jonathan Goddard.