Although Shenzhen is a Tier-1 Chinese metropolis, it has only been a city for 38 years. When Shenzhen was declared a city in 1979, residency spiked. The tourism industry is starting to catch up, as Shenzhen is now the sixth most popular Chinese city for overseas tourists. Located just across the border from Hong Kong, Shenzhen is the only Tier-1 city in the southern region of China other than Guangzhou. When you cross the border from Hong Kong, you truly have the sensation of entering Mainland China. Suddenly, the signs are only in Mandarin, rather than in Mandarin, Cantonese, and English. On this side of the border, the locals don’t stand in line or apologize when they bump into you. People surrounding you on a subway car probably don’t speak any English at all. This is Shenzhen in the People’s Republic of China.

Crossing the street in Shenzhen feels a lot like playing Frogger with Seinfeld’s George Costanza. Yes, beware of cars and buses, but your true nemesis is the biker. People on motorbikes will run red lights or swerve around you at crosswalks in a heartbeat. Honking echoes in Shenzhen streets, but don’t be offended. Honking is the Chinese way of saying, “Hey, just a head’s up, I’m coming up behind you. Please don’t make any sudden movements, or we will both die.” Considering how chaotically most people drive, honking is more of a blessing than a curse.

Buses can take you almost anywhere and are typically cheaper than taking the metro, but if you’d rather avoid the pandemonium at street level, you can take the underground train. An added benefit of using the underground is that although buses usually stop running around 9 or 10 pm, metro service continues until 11 pm or midnight.

If you are willing to shell out more money to sidestep public transportation altogether, taxis are easy to grab. Drivers generally start their meters at between six and thirteen yuan, depending on the area and time of day. Wherever you are, do a little research on taxis before you go. They can be tricky. For example, in Bao’an, the district farthest west, green taxis will only take you around Bao’an. Red taxis will take you to other districts. So if you hop in a red taxi in Bao’an and ask the driver to take you three blocks, don’t be surprised when he kicks you out of his cab. 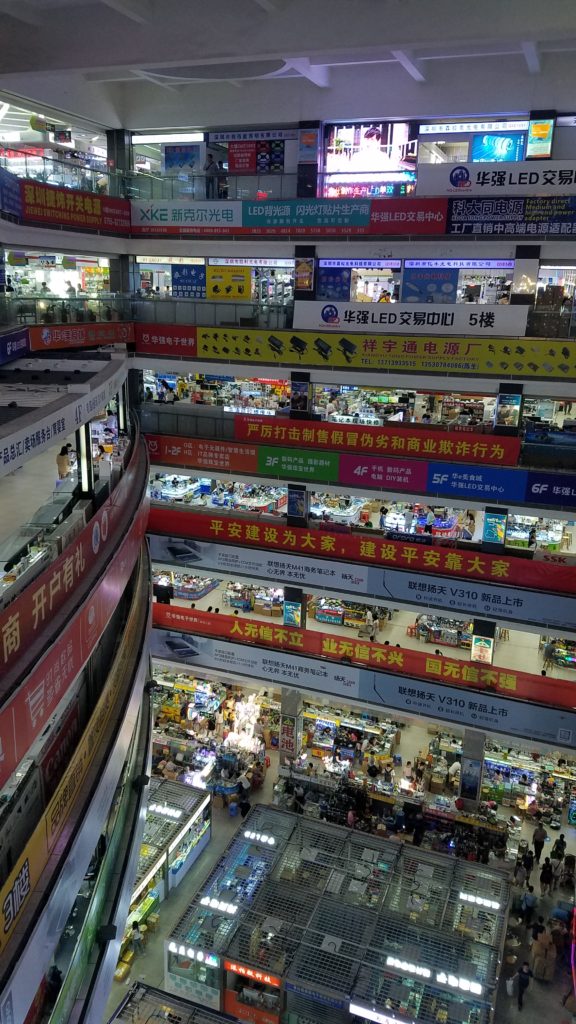 Traveling in Shenzhen is not quite as cheap as in Southeast Asia, but you will definitely get more bang for your vacation buck on the Mainland China side of the border than in Hong Kong. Truthfully, prices vary by area. If you book a hotel or go out in Nanshan District in the southwest or the nearby Futian District, you will probably pay a little more than in Bao’an District. There is more to see and do in Nanshan and Futian, though, so you choose your trade-offs. In Bao’an, budget travelers can book a decent room at the Green Oasis Hotel for only a little over 100 yuan, or US$15. In Nanshan, you can get a nice room at GreenTree Alliance Shenzhen Shekou Sea World Hotel for around 230 yuan, which is still under US$35 and in a popular location. You can buy a good meal for 60 yuan, or even less if you take the time to shop around.

When Shenzhen gained city status in 1979, the population was only 30,000. Now, since the urban population has catapulted to over 10 million in less than four decades, very few inhabitants are originally from Shenzhen. During the annual observation of Chinese New Year from mid-January to mid-February, cities such as Shanghai, Beijing, Guilin, and Guangzhou are booming. Shenzhen, on the other hand, is dead in comparison, because almost everyone leaves to reunite with extended family in their hometowns.

Many rural families have recently moved from small towns to Shenzhen. Certain areas, such as Children’s Palace and Shopping Park, are fairly nice and clean as far as China goes. If you go to neighborhoods such as Fuyong, however, people have dirtier habits. For example, grandparents help their toddlers poop on the sidewalk and then don’t clean it up. This is a direct result of the huge influx of rural people to the big city. 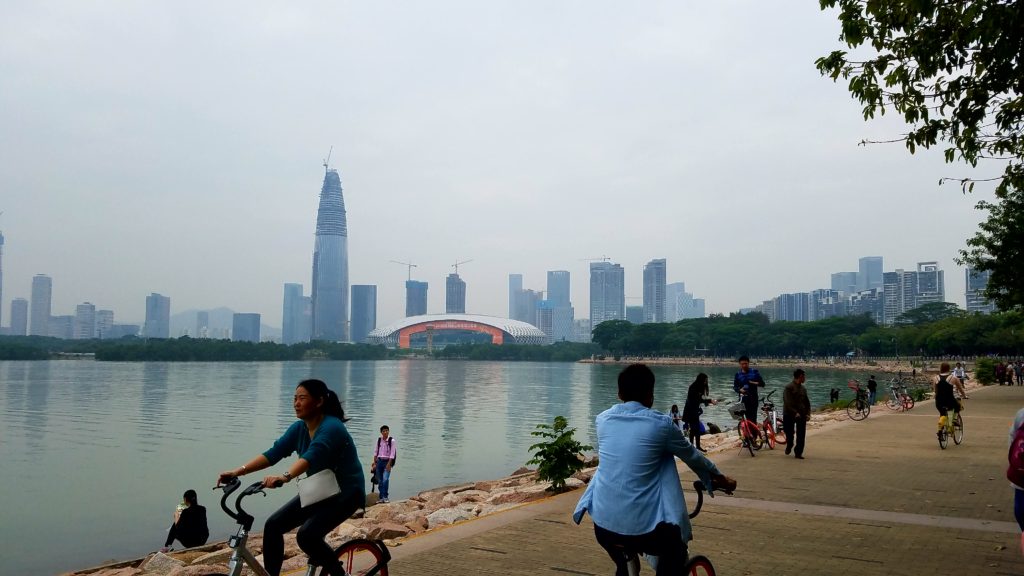 Shenzhen doesn’t have the huge touristic draws of other Tier-1 cities. It doesn’t have the Great Wall of Beijing or the architecture of Shanghai. Honestly, that’s what I love about Shenzhen. It’s a rising city that has not yet become a tourist trap.

Shenzhen has a nice blend of outdoors and city life. Intense hikers love Mount Wutong, a peak that takes about three hours of walking up steps to reach. Keep in mind that you can walk up a paved path instead, but you will miss some nice views. I have yet to make it to the top of Mount Wutong, so if you are a less-seasoned hiker like me, Nanshan Mountain is the place to go for 360-degree views of the city. Locals and tourists alike love visiting Shenzhen Bay Park on the weekends. The park is 13 km (8 miles) long. Most people rent a bike when they arrive, because it only costs 20 yuan for a full day’s use of the bicycle. On a clear day, you can see Hong Kong across the bay and enjoy one of the best sunset spots in the city. 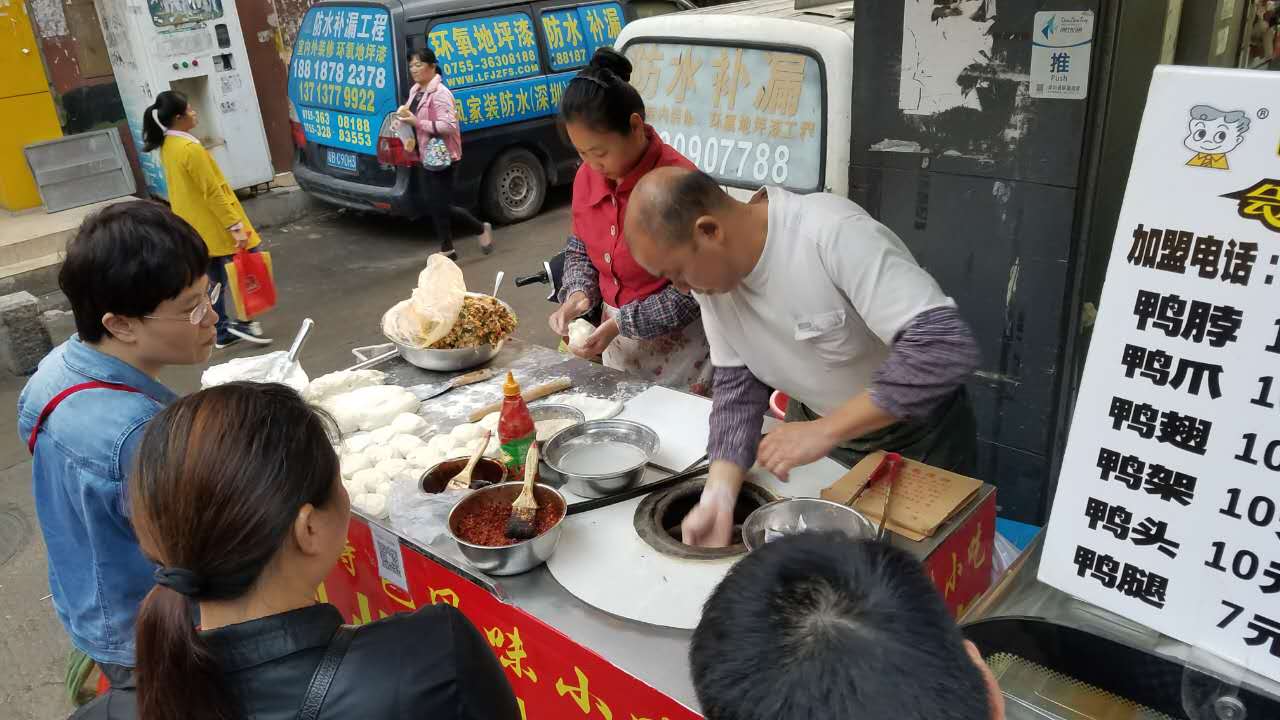 As in many Asian cities, street food is the way to go. Visit the well-known Dongmen Street for your choice of rice-stuffed chicken breasts, pretty much any kind of meat on a stick, or balls of fried octopus. For breakfast, you will find dishes specific to Guangdong Province and Shenzhen at street food stands. Order yóu tiáo, fried bread sticks, or shāo bǐng, unleavened bread stuffed with meat, spices, and vegetables. At sit-down restaurants, order Guangdong Province’s guīlínggāo, or Turtle Jelly, for dessert.

A final insider’s secret. If you see a Halal restaurant in Shenzhen, you owe it to yourself to go in. Only 1.6% of Chinese people are Muslim, but oh man, can that 1.6% ever cook some delicious lamb! If you are out on the streets at an early hour, you may witness an employee kill, sheer, and gut a sheep on the sidewalk outside the Halal restaurant!

Have you spent any time in Shenzhen? Comment with tips for enjoying this Chinese city!

Laura Grace Tarpley is a writer and English teacher in China. She enjoys tinkering with crossword puzzles, hiking, and taking naps on her huge couch. Keep up with her travels and writing on Instagram, Twitter, Facebook, or her website.