10 Dishes to Try in Southeast China

Right across the border from Hong Kong, Southeast China attracts more and more tourists every year. In this part of the country, you’ll find three popular provinces. First, Guangdong Province contains Southeast China’s only tier-1 cities, Shenzhen and Guangzhou. Second, Hainan Province dishes up a relaxing beach lifestyle. Third, Fujian Province is one of the most culturally diverse provinces in the country.

My favorite aspect of Chinese culture is that each province has its own unique styles of cooking. Sichuan Province in Central China serves painfully spicy food. Anhui Province in Eastern China uses wild vegetables and animals as ingredients. In the Southeast provinces, you can expect to eat plenty of seafood, soup, and milder flavors.

Here’s what to eat in Southeast China 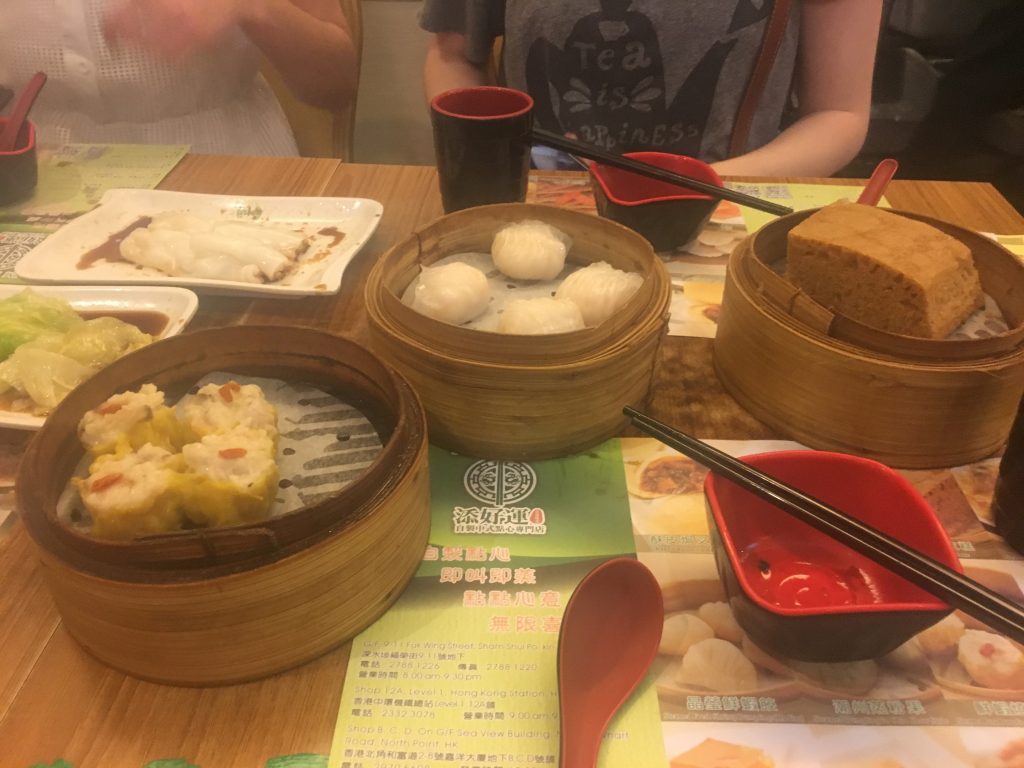 While most people in Southeast China speak Mandarin, many inhabitants also speak Cantonese, the language of Hong Kong. Since Hong Kong borders Southeast Mainland China, you’ll notice a number of similarities in food, language, and culture.

Dim sum is Cantonese for “small heart.” This name is appropriate since when you go to a dim sum restaurant, you receive several small plates and steamer baskets of tiny portions of food. And when you order dim sum, you eat authentic food that is close to the heart of locals.

Alongside each order, you will usually receive three meat buns, three dumplings, or a serving of sticky rice. My favorite dim sum dishes are steamed pork buns, pork or shrimp siumai, and steamed soup dumplings.

Not only is Cantonese dim sum one of Southeast China’s most popular dishes, it also allows you to try many traditional foods at once. You’re killing two birds with one stone. 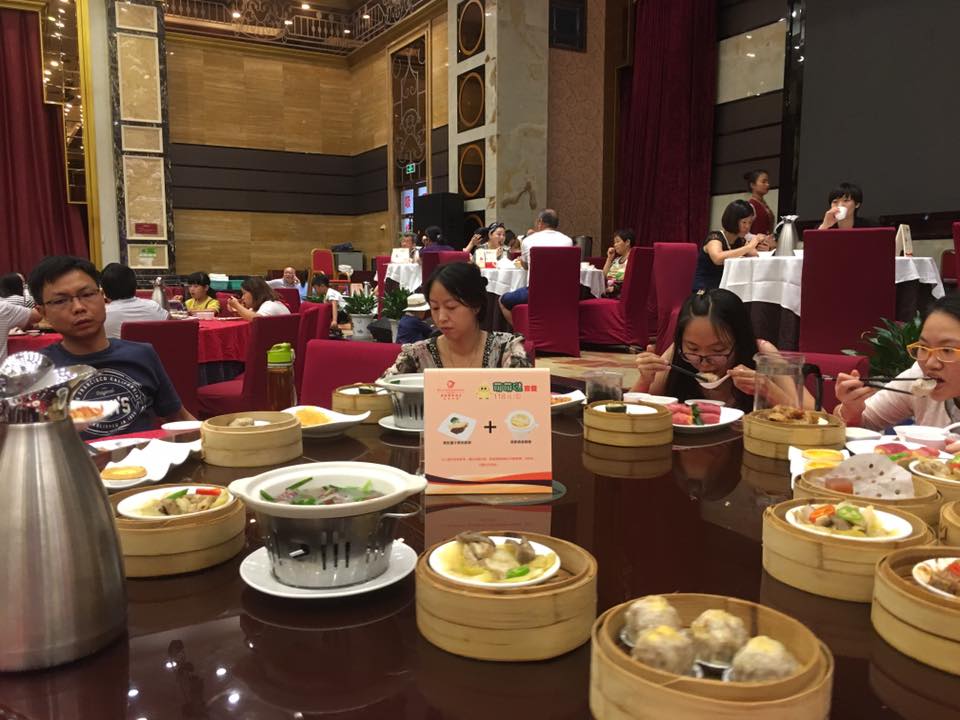 Yum cha is the equivalent of Cantonese brunch. Who doesn’t love brunch?

When you say you’re eating yum cha, it’s assumed that you will order Cantonese dim sum, as well as baked goods and traditional Chinese tea. I’ve never eaten yum cha at an establishment that offers English-language menus. If you have the option, experience this meal with Chinese people who will help you order. While it’s possible to use your Google Translate app to interpret the menu, being accompanied by locals makes the ordering process a thousand times easier.

The best place I’ve ever had yum cha was at the Royal International Hotel in Bao’an District, Shenzhen. 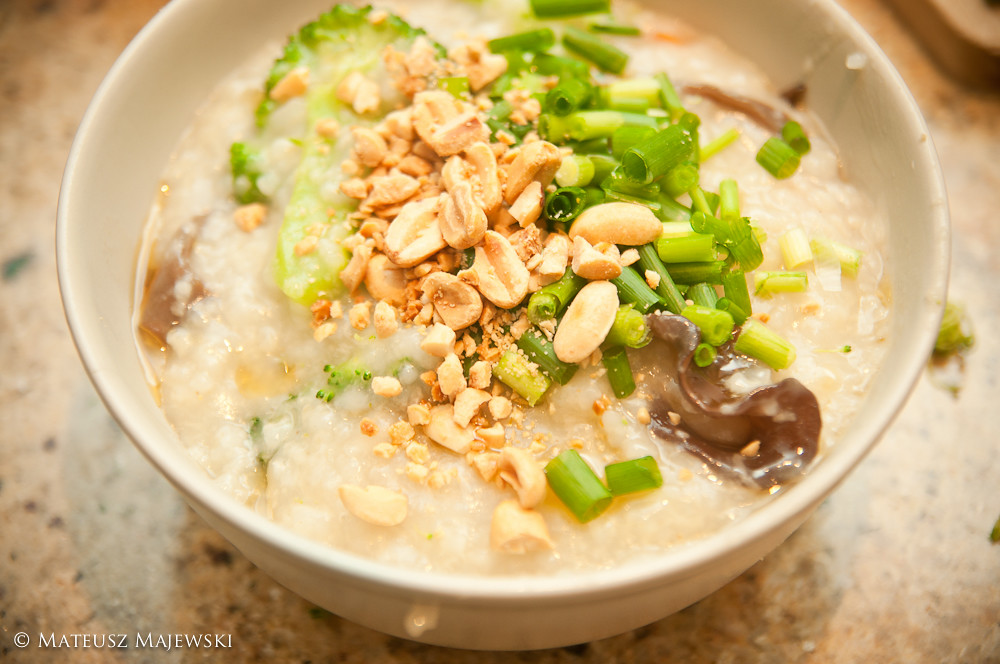 When I think of Chinese cuisine, my mind instantly jumps to rice. The Chinese incorporate rice into practically everything, including breakfast food. Congee is the perfect example. This plate is porridge made from rice.

Rice porridge sounds like a pretty boring breakfast dish. But most Chinese cooks add a bit of flavoring. There are no hard and fast rules about what people add to congee, but some classic ingredients include ginger, garlic, meat, and hot sauce. I recommend tasting congee from several different food stands or restaurants on your trip to Southeast China, because no two bowls will taste the same.

If you want to dip your toe in the congee pool, you know what place serves a surprisingly good bowl? Chinese McDonald’s! 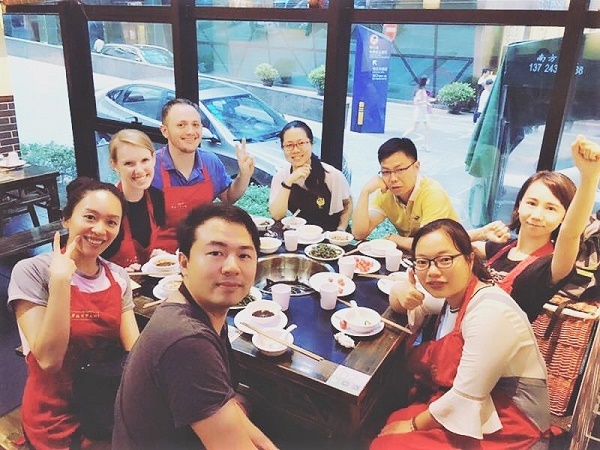 Oh, how to explain hot pot? Think of fondue. But instead of dipping marshmallows in chocolate or vegetables in cheese, you dip raw meat in a vat of boiling water.

When you go to a hot pot restaurant, you order raw food and cook it all yourself at your personal table. It’s a popular style of cooking in Southeast China, particularly for special occasions and group outings. Set aside a couple of hours, because eating hot pot is an experience that should not be rushed.

Once again, try to go with locals if possible. You never know what you’re going to get otherwise! One time, I thought I was ordering pork belly but accidentally ordered pork stomach, also known as tripe. It tasted like mushy scales on a slug. On the other hand, locals will probably encourage you to eat something you never would have tried on your own. My Chinese friends convinced me to cook and eat raw pig brain!

If your group has varying tastes, find a restaurant that lets you split the pot of water in half, a different flavor for each side. Try Shuabu Shuabu Fashion Hot Pot Restaurant in Fuzhou or Huashen Hot Pot in Shenzhen. 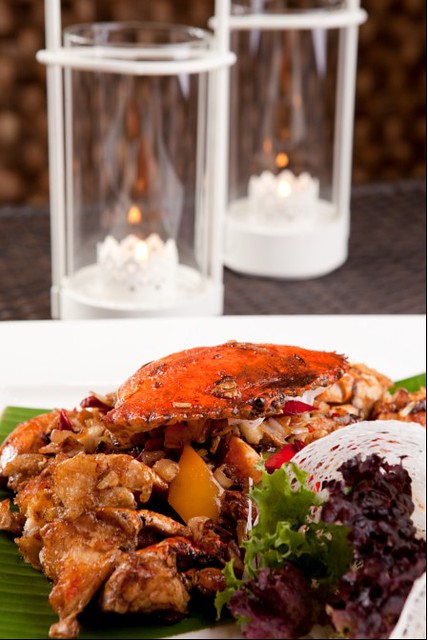 Hele crab is one of the most famous dishes of Hainan Province. This province is an island in South China. If you’re in Hainan Province, chances are you’re visiting Sanya, a well-known beach town where locals and expats alike spend their vacation. To make the most of your time on this island, try as much seafood as possible!

Hele crab is unique because the meat is more tender than most crab meat. Cooks usually steam the crab and add garlic, vinegar, and ginger for flavor. If you order this dish in Hainan Province, the crab will always be fresh, and will likely be some of the best you’ll ever taste. 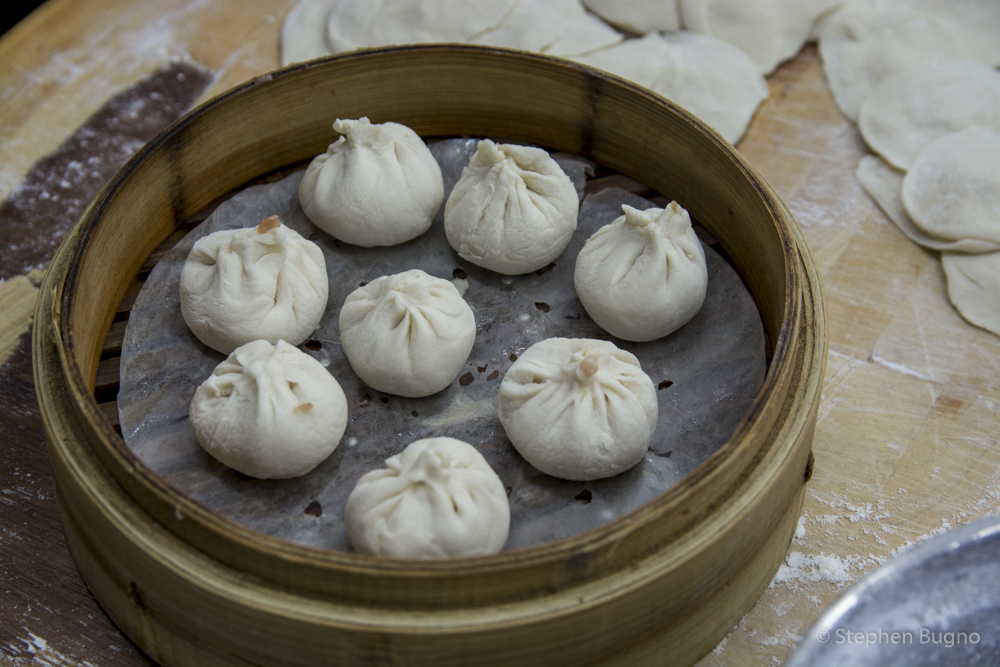 When you think of traditional Chinese cuisine, dumplings are probably one of the first dishes that come to mind. In Southeast China, you can find dumplings of all types. One of the most unique is xiao long bao, or soup dumplings.

Soup dumplings are exactly what they sound like, hot dumplings filled with broth and other ingredients. My personal favorites are pork soup dumplings. Stop at a dumpling restaurant in this part of the country and ask for two orders of different soup dumplings so you can try them both. Remember, if you get too full, you can always take some back to wherever you’re staying! Just point to your leftover food and tell an employee, dǎ bāo (“to go”). 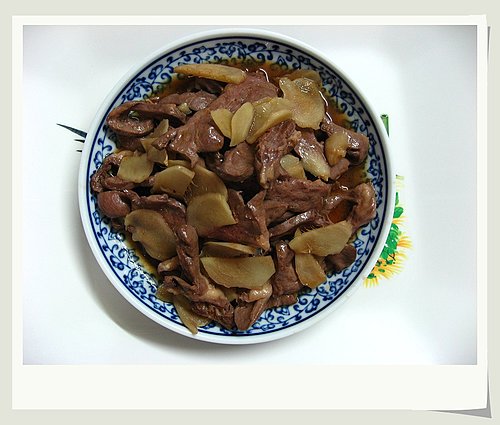 Long hu dou is a traditional dish of Guangzhou, which is probably the most popular city in Southeast China. It literally translates to “dragon fighting against the tiger,” so you can guess that eating this meal is not for the faint of heart.

Any guesses as to what the main ingredients are?

I’ll go ahead and tell you. Snake and cat.

Yes, Guangzhou locals fit the Chinese stereotype of eating cute little animals. (Referring to cats. I mean, I love snakes, but I don’t think of them as cute.) If you want to branch out and truly eat like a local, find a restaurant that serves this dish. You might want to order something else along with it, though. It may taste great, but the thought of what you’re eating might be too much to stomach for an entire meal. 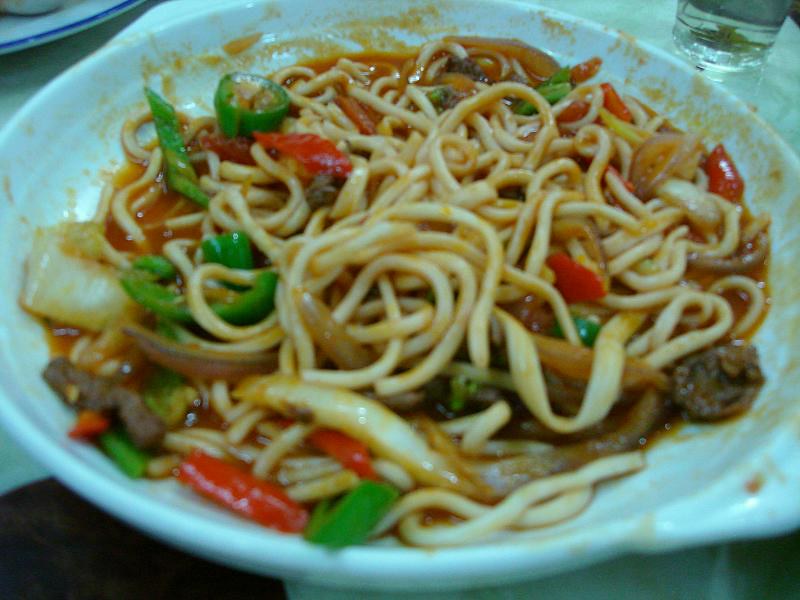 Halal food, or traditional food of Chinese Muslims, originated in North China. However, many Muslims have immigrated to Shenzhen over the years, so it’s easy to find quality Halal restaurants all around Shenzhen, regardless of which district you are in. Now you can experience authentic cuisine from a different part of the country, even if you can’t fit a visit to North China into your itinerary.

Most Halal restaurants serve a lot of lamb. In fact, if you walk by a restaurant in the early morning, you might witness restaurant owners killing and shearing sheep for the day’s supply of mutton.

Halal meals are usually pretty simple, but they never disappoint. Order Lanzhou beef noodle soup or suan cai, pickled cabbage. If you’re on the go, stop outside a Halal restaurant if you see a proprietor grilling lamb kebabs over charcoal.

This snack is big in Guangdong Province, where Shenzhen and Guangzhou are. Youtiao is basically a fried churro. It tastes like a donut, but it isn’t as sweet. You will probably see youtiao all over Chinese food market streets.

If you want to be thoroughly Chinese, order youtiao at yum cha, the Chinese brunch described above. Then dip it in hot soybean milk. 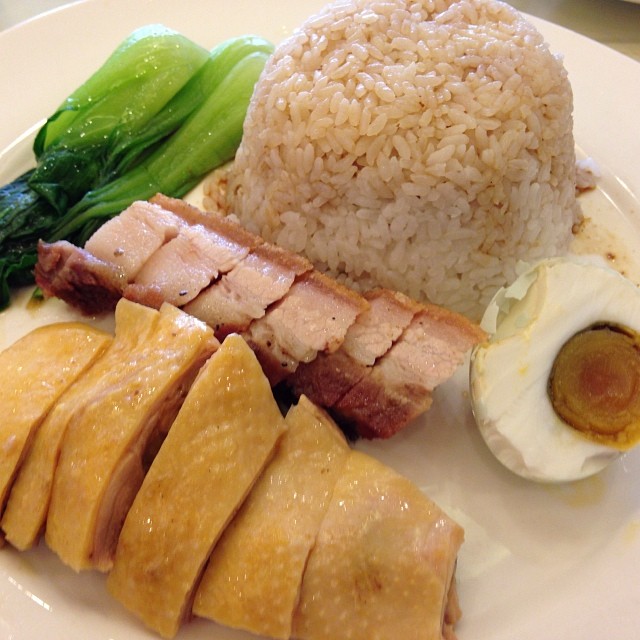 This dish is served throughout Southeast China. It is perfect for travelers who want to try authentic food but are more conservative in their tastes.

White cut chicken is poached, then cut into slices, with all the bones and skin included. Chinese people typically eat meat with the bones inside, rather than cut around the bones. They just stick it in their mouths, chew around the bone, then spit the bone back out on their plate.

Bonus points if you can finish this entire dish without using your hands to pull bones out of your mouth.

I would not describe China as a place for comfortable living, but I would definitely describe it as a place for adventurous living—starting with the food. If you’re lucky enough to visit Southeast China, trying any of these meals will make your stay a little more exciting.

Have you been? What’s your favorite food in Southeast China?

Laura Grace Tarpley is a writer and English teacher in China. She enjoys tinkering with crossword puzzles, hiking, and taking naps on her huge couch. Keep up with her travels and writing on Instagram, Twitter, Facebook, or her website.

1 thought on “What to Eat in Southeast China”