Recoleta Cemetery in Buenos Aires is full of famous corpses. There are Argentine presidents, poets and Nobel Prize winners. Napoleon’s granddaughter is here. So are boxer Luis Firpo and Eva Perón. Evita is the big attraction, but her memorial isn’t particularly interesting—just a series of plaques on the Duarte family vault. Her preserved remains are sealed deep in a subterranean crypt.

Recoleta’s mausoleums were decorated by some of Argentina’s finest sculptors. This City of the Dead is an open-air art gallery, brimming with masterpieces in styles ranging from Art Nouveau to Neo-Gothic. A day spent wandering its narrow lanes is a highlight of any trip to Buenos Aires.

Here are 7 amazing tombs to see in La Recoleta. 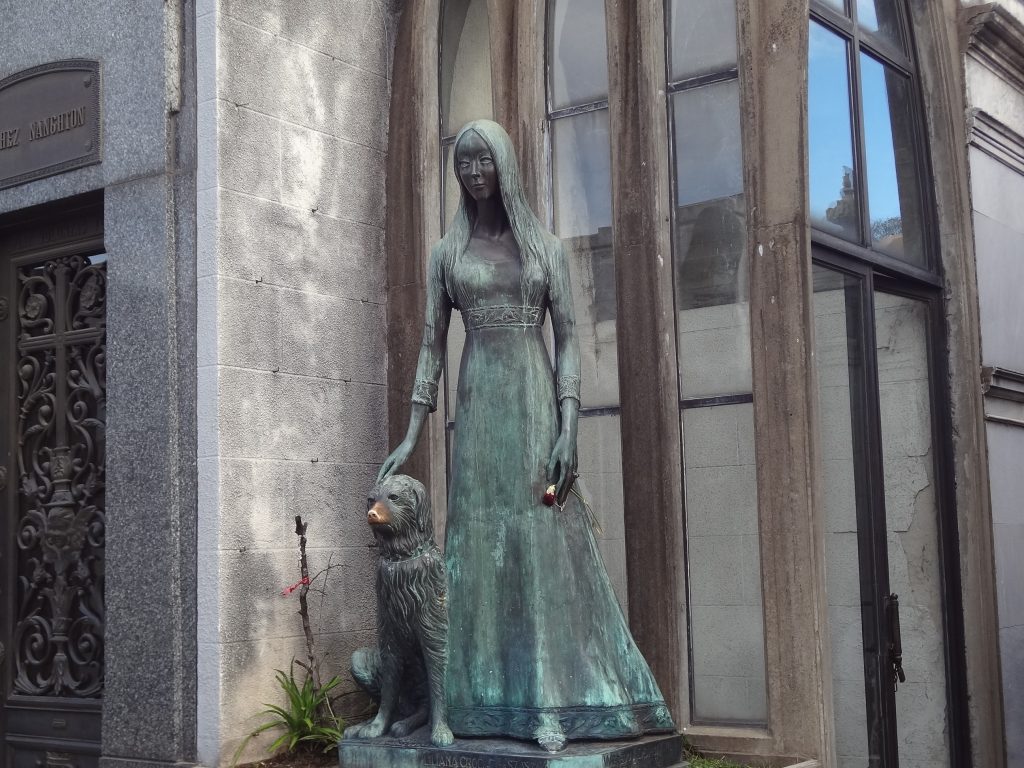 On the morning of February 26th, 1970, newlyweds Juan and Liliana de Szaszak were asleep in their room at the Piz Buin Hotel in Zürs, Austria. As dawn approached, an avalanche slid down the mountain and crashed through their window. Juan Szaszak survived, but his wife did not.

Liliana’s tomb was designed by her mother, and executed by sculptor Wíeredovol Viladrich. A bronze figure of the doomed bride stands before a trio of Gothic windows, her hand resting on the head of her faithful dog, Sabú. The inscription is a poem in Italian by her father expressing his anger at the unjustness of God and “invidious nature.” 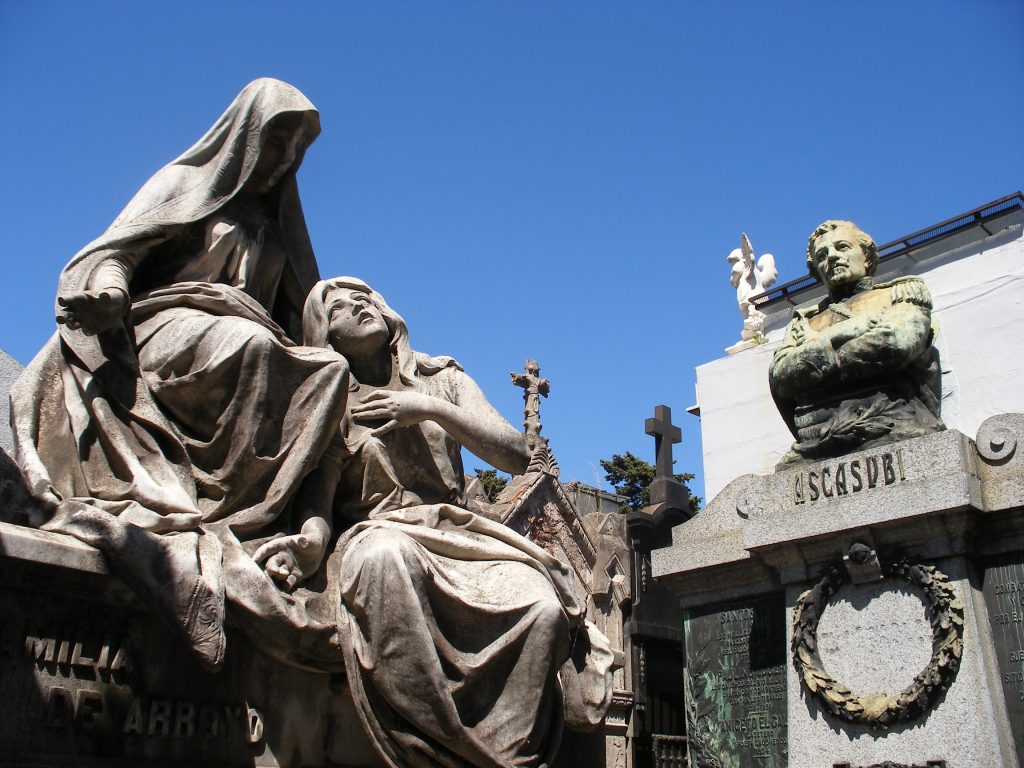 Hilario Ascasubi is known primarily today as the author of “Santos Vega,” an epic poem about a gaucho minstrel who loses a singing competition to the Devil. Before becoming a poet, Ascasubi spent two years sailing the seven seas on La Rosa Argentina. In 1825, he joined the army of General José María “One-Arm” Paz to battle Brazilians. He was later exiled from Argentina for writing satires against the government. After his banishment ended, he was assigned to a diplomatic post in France. He died in Buenos Aires in 1875 at the age of 68.

Ascasubi’s tomb is one of 94 registered National Historic Monuments in Recoleta. The plaques below his bust list his literary and military achievements. 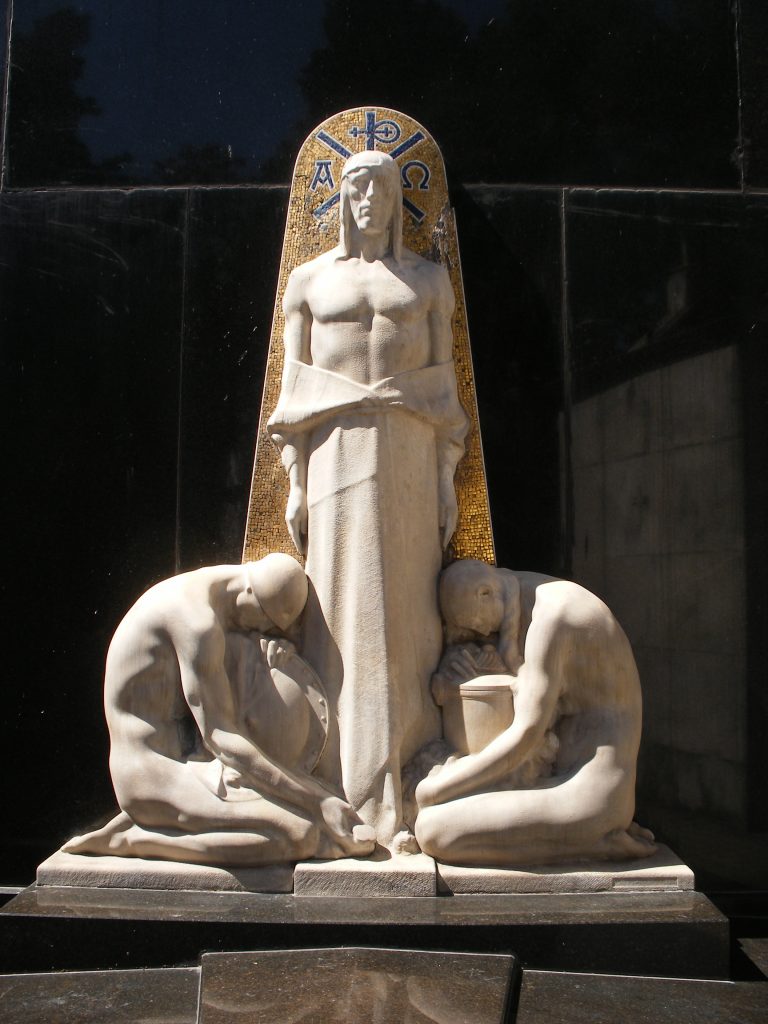 This stunning Art Deco tomb features a figure of Christ flanked symmetrically by a soldier and a woman. They kneel mournfully at his feet, heads bowed. Christ is backed by a glimmering gold mosaic, with the symbols for alpha and omega (first and last letters of the Greek alphabet) above his head. These symbols are a common sight in Recoleta and represent the beginning and end of life.

The Vélaz family made their fortune in cattle. 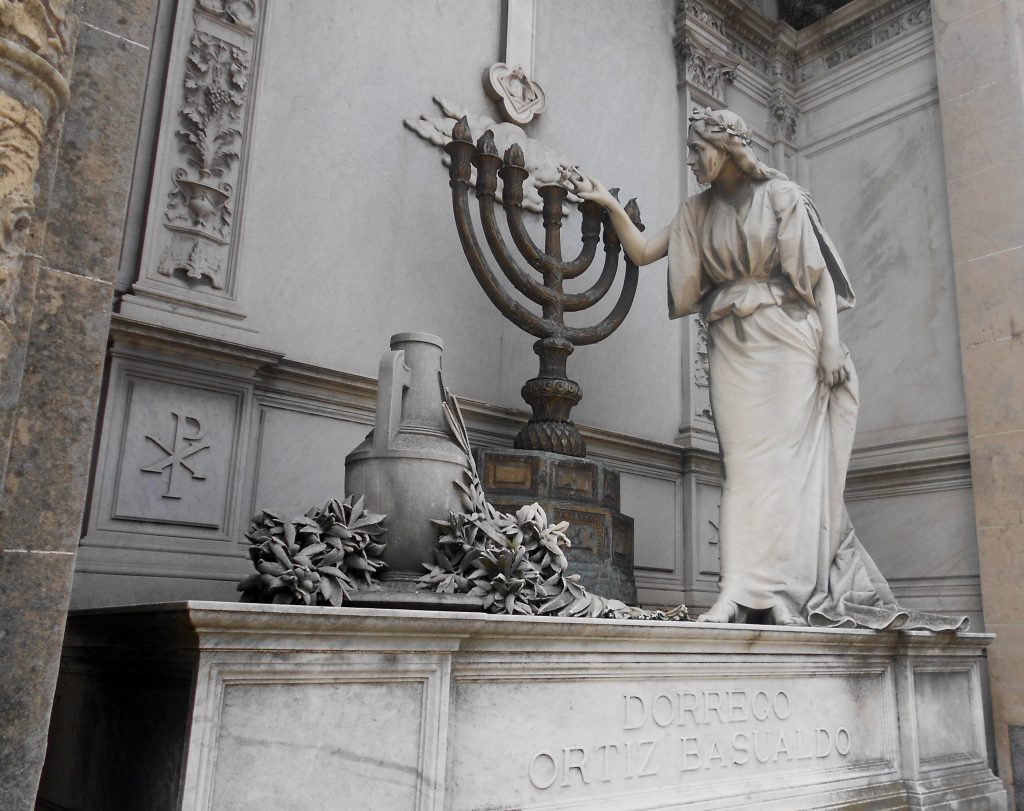 The aristocratic family inside this huge vault (one of the largest in Recoleta) once occupied an equally impressive home on Cerrito Street. That Beaux Arts palace is now the French Embassy. The tomb sculpture shows a woman lighting a lamp, which refers to the New Testament Parable of the Ten Virgins. Its lesson is to wait with patience and vigilance for the Second Coming. The mausoleum is ornate inside and out, with a stained-glass rosette window. 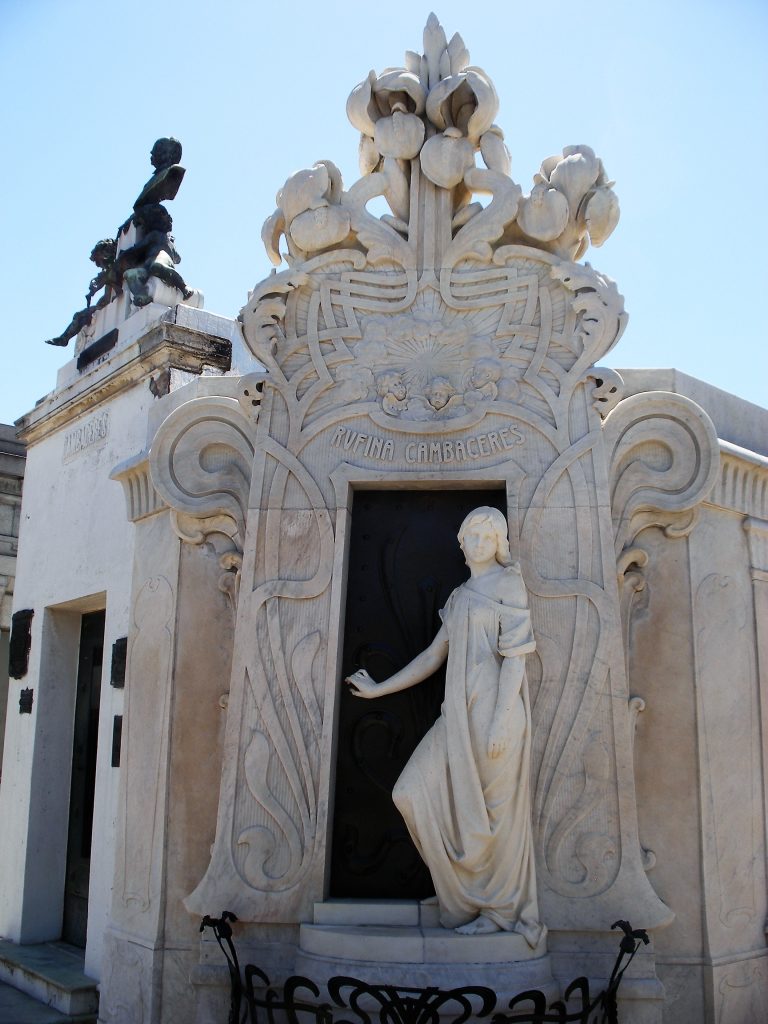 There are a number of morbid stories surrounding the death of Rufina Cambaceres. One says she fell into a coma and was accidentally entombed alive. When caretakers found her coffin lid askew, they turned it over and saw scratches in the wood. There were wounds on the corpse’s face, and her fingernails were bloody. Another story says Rufina escaped her coffin and ran to the cemetery gate, where she collapsed and died of a heart attack.

Neither of these tales has been proven. What we do know is that Rufina Cambaceres, a wealthy socialite, was pronounced dead at her home on her 19th birthday (May 31, 1902). She’d planned on attending the opera that evening.

Her tomb is a spectacular example of Art Nouveau design, bursting with floral motifs and vine-like tracery. Rufina stands before its door, her hand at the latch, perhaps pondering another escape. The marble sarcophagus, also Art Nouveau, can be viewed through the mausoleum’s side door. 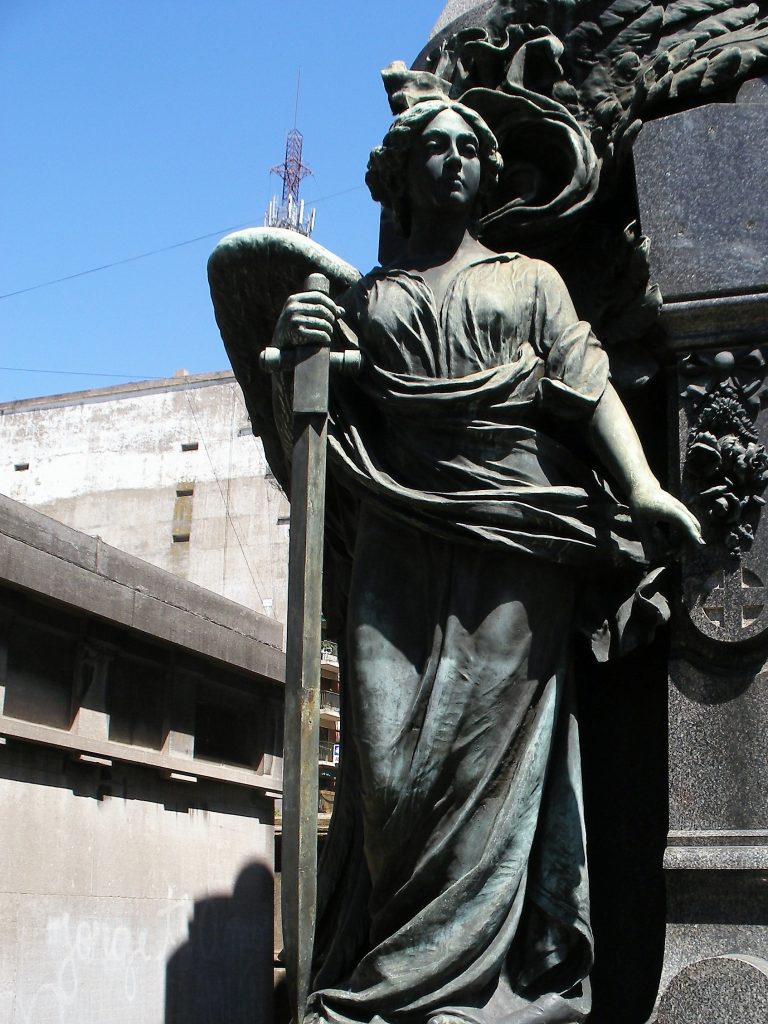 There are some very nice bronze cherubs on the door of this tomb, but they’re easy to miss when you’re standing in the shadow of a massive, sword-bearing guardian angel. She’s over ten feet tall, and her weapon is nearly as long—an imposing sentinel that would give any grave robber pause.

Olivera (1843 – 1918) was a wealthy landowner who introduced English Durham bulls to Argentine rodeos. 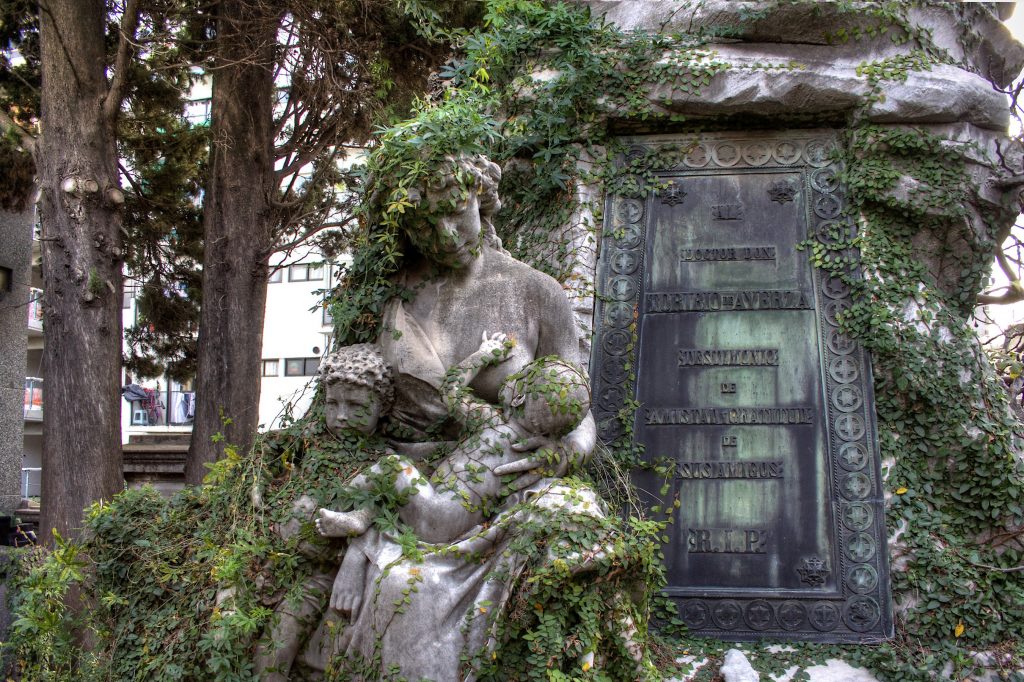 Toribio de Ayerza was a Basque doctor who immigrated to Argentina in 1845. He co-founded the Argentine Red Cross and brought the tracheotomy, a new European medical technique, to his adopted country. Thanks to the tracheotomy, many children survived diphtheria. The doctor’s humanitarianism is commemorated on his tomb by a sculpture of a woman nursing a child, a symbol of charity. Trees, shrubs and ivy grow around (and on) the crypt, a rare patch of nature in Recoleta.