How to Spend a Day in Eastbourne, England

BESIDE THE SEASIDE IN EASTBOURNE

The coast of Victorian England was studded with resort towns and pleasure piers. There were attractions designed to appeal to every class of vacationer, from bawdy music halls to refined tea rooms. Now, thanks to package tours and cheap flights to sunnier climes, many of Britain’s coastal resorts have fallen into a state of neglect. Half of the historic piers are gone.

Luckily, there are survivors. For a taste of what the seaside was like in Queen Vic’s heyday, hop a train to Eastbourne, in Sussex, where the Grand Hotel continues to serve up a splendid afternoon tea, and you can still get a stick of rock (that famous seaside candy) on the pier. There are natural wonders, too. A short bus ride will take you to the iconic white cliffs of Beachy Head and Birling Gap.

Here’s how to spend a day in Eastbourne, England: 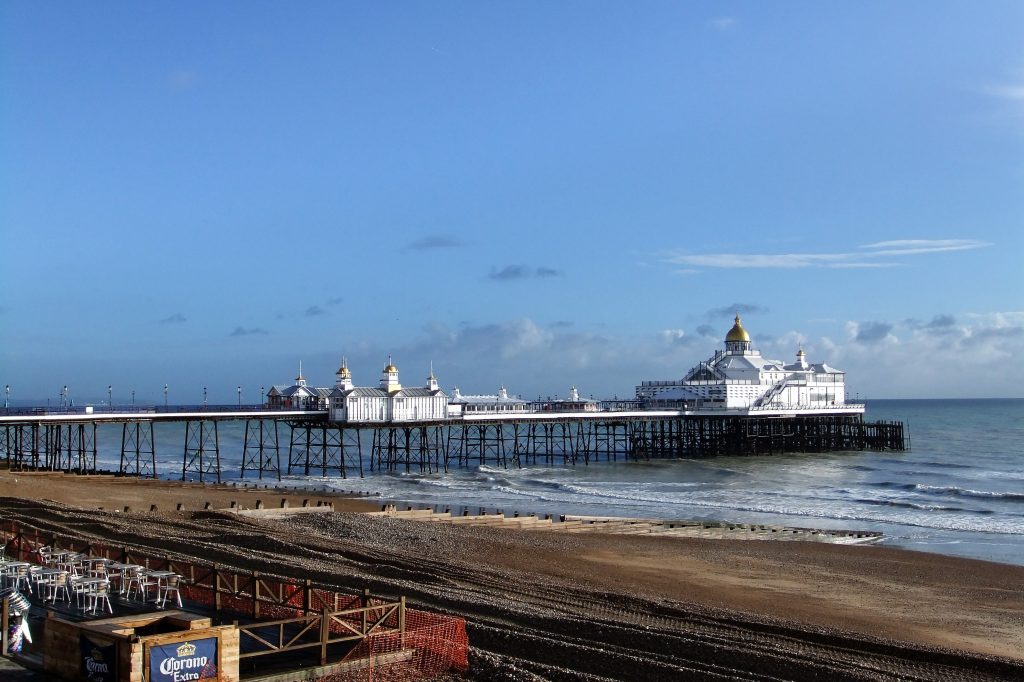 The pier at Eastbourne opened in 1870, and has endured a number of fires. It’s thriving again now, with a nightclub (1901 Jazz Lounge), a traditional fish and chips shop (The Chippy), and the wonderfully retro Victorian Tea Rooms. The Camera Obscura housed beneath the pavilion’s dome is undergoing a thorough restoration, and will soon be thrilling visitors with the same magical views that astounded Victorians in 1901.

No trip to the seaside would be complete without enjoying a stick of rock, and the pier’s sweet shop has a fine selection. This colorful British treat looks like a cylindrical candy cane, and comes in a multitude of flavors—try the Knickerbocker Glory. 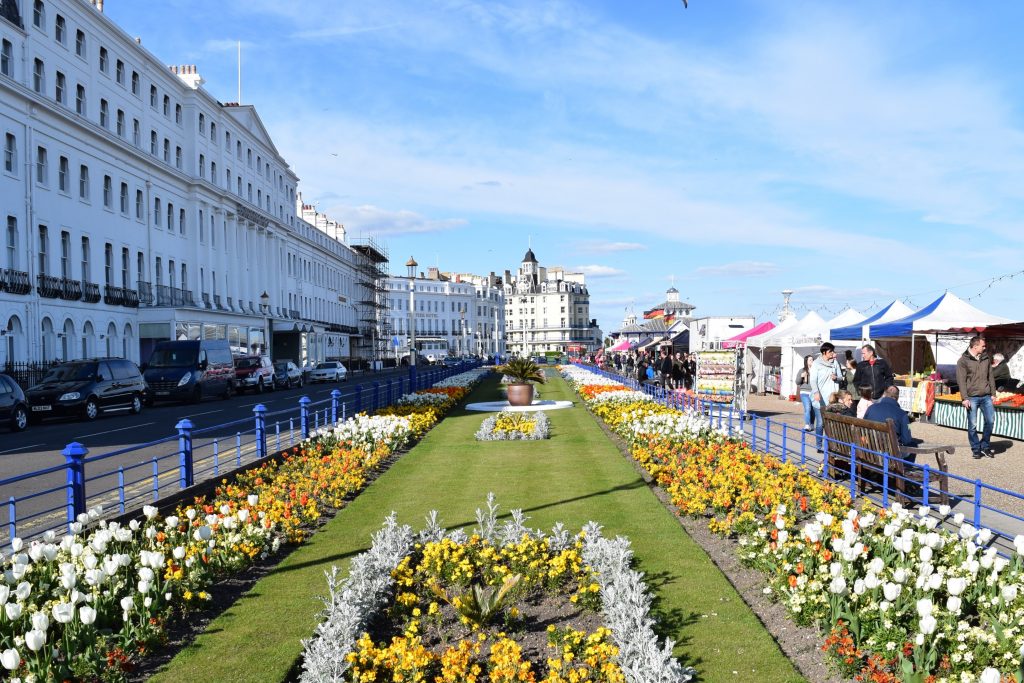 The British love a good seafront promenade, and Eastbourne has one of the best. Its centerpiece is the world-famous Carpet Gardens, a seasonal floral display that features Victorian-style geometric beds. Because Eastbourne is located on England’s temperate south coast, plants from the Mediterranean and even Mexico have been incorporated into the design.

On the city side of the prom you’ll see miles of historic whitewashed hotels. On the seaside there are shingle (stone) beaches with guarded swimming areas, beach huts, shops, cafés, and parasol rentals. If there’s anything doing at the bandstand (built in 1935), get a ticket. Nothing beats a concert by the sea. 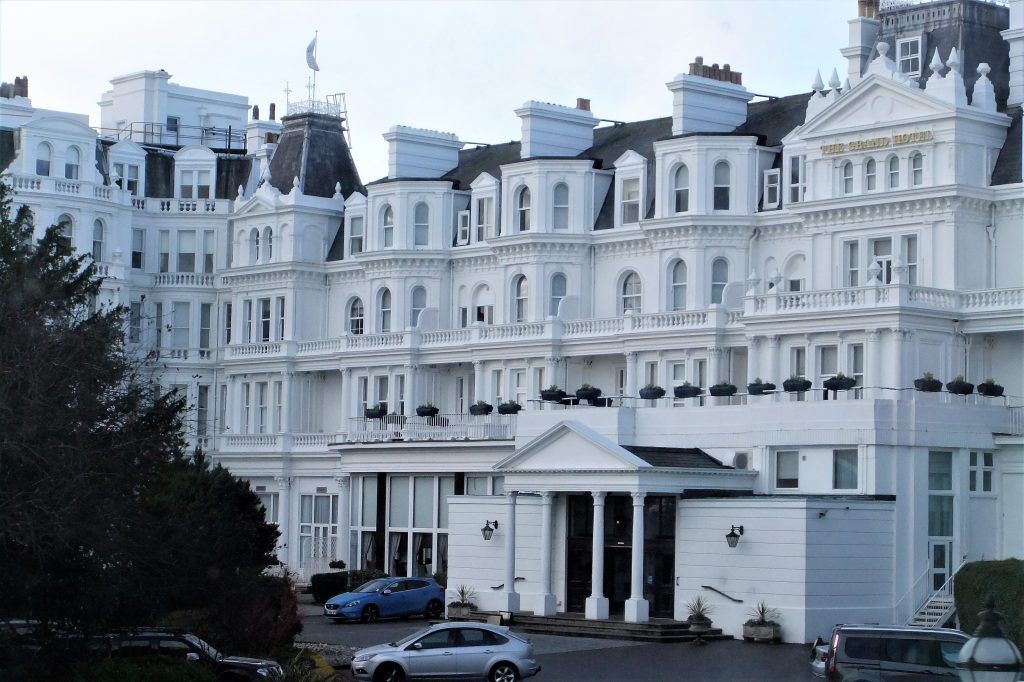 If you’re lucky, that concert will feature Claude Debussy’s La Mer (The Sea). Debussy composed his most popular orchestral piece just down the road at the Grand Hotel.

Be sure to stop by this Victorian “White Palace” (the only 5 star hotel on the English coast) even if you don’t plan on staying the night. You can have tea in the Great Hall, or a Ginger Fizz in the Cocktail Bar. There are two restaurants, the much-lauded Mirabelle, and the less formal Garden. Both offer breakfast, lunch, and dinner with locally sourced foods. 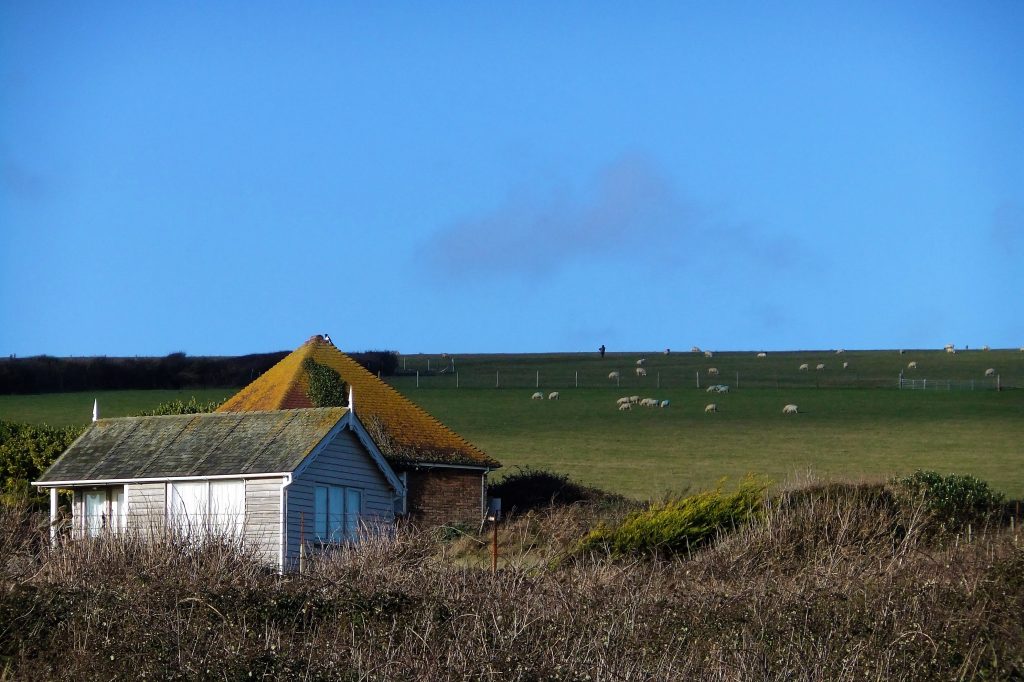 This National Trail starts in Eastbourne and stretches 100 miles to the city of Winchester in Hampshire. On the way it passes through some of England’s most beautiful natural scenery: chalk cliffs, grasslands, woods and farms. Hiking the South Downs Way is an unforgettable experience, and easily managed.

If you don’t have a car, your best option is to catch the green double-decker Eastbourne Sightseeing bus. For 10 GBP it takes you on a 16-stop loop around the city and out to the Downs. For a short, pleasant hike, hop off at the Beachy Head Countryside Centre and take the trail beside the cliffs to the next bus stop at Belle Tout Lighthouse. The views are incredible, and a bit frightening if you venture too close to the edge. In summer, buses run every half hour from 10:00 am to 5:00 pm. Tickets are valid for 24 hours. 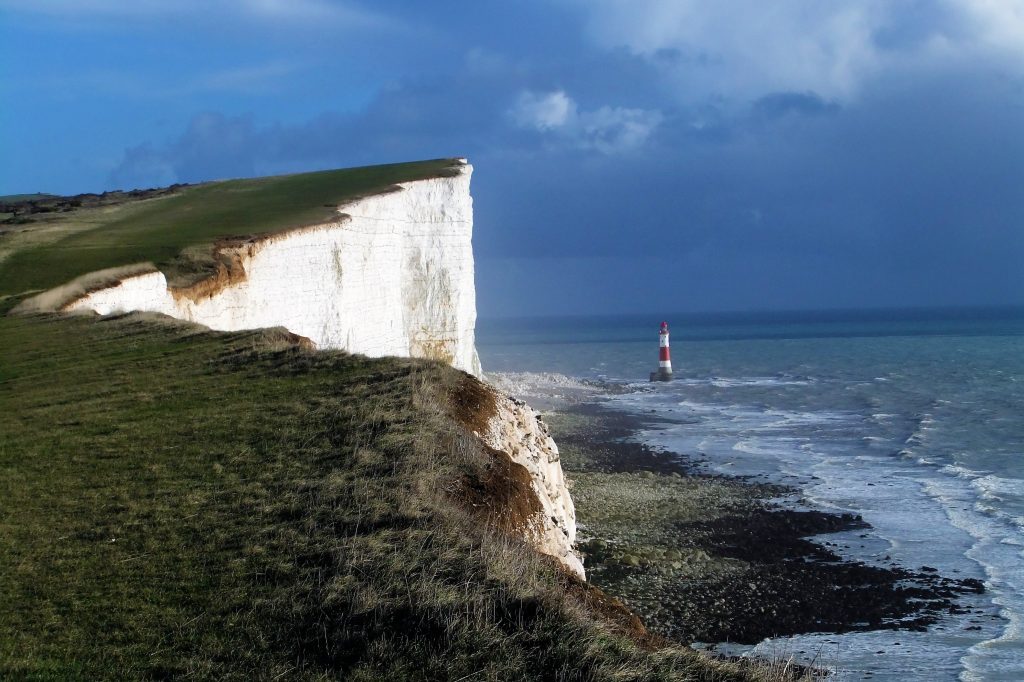 Beachy Head is the highest chalk cliff in the United Kingdom. A red and white lighthouse stands 531 feet below its rim, in the roiling waters of the English Channel. The lighthouse was built using over 3,600 tons of Cornish granite, and has been withstanding the buffeting winds and waves since 1902. At the top of the cliff, you’ll find a series of World War II memorials, one commemorating the 55,573 RAF Bomber Command aircrew who died in combat. Beachy Head was often their last view of England.

The Countryside Center (open seasonally) near the bus stop has a gift shop, an art gallery, and an exhibition on the history of Beachy Head and the surrounding downlands. There’s also a nice pub with outdoor seating for warm days or a cozy fireplace for the not so warm ones. 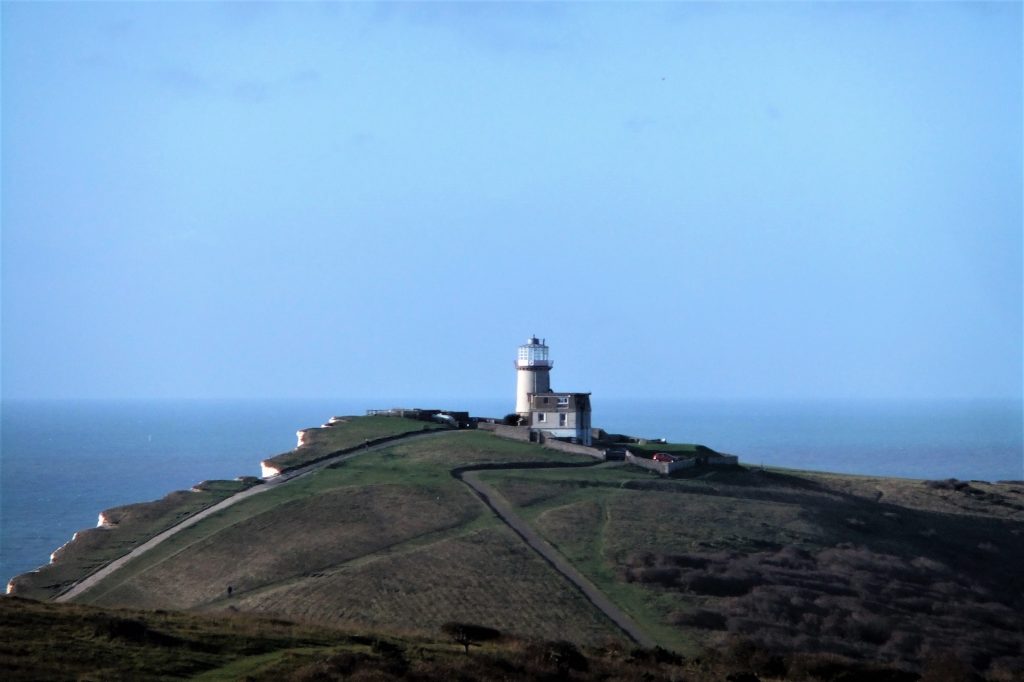 Belle Tout was constructed in 1832 to help sailors navigate the treacherous coastline near Eastbourne. If you couldn’t see the light, you were too close to the cliffs. But the more the cliffs eroded, the less effective the lighthouse became. Fog was also a problem. As a result, Belle Tout was decommissioned and replaced by the offshore Beachy Head Lighthouse in 1902.

The cliff edge continued to creep up on Belle Tout until 1999, when the entire structure had to be moved back 56 feet. It’s since been converted into a Bed and Breakfast with 6 guest rooms and a fireside lounge. Atop the tower is the Lantern Room, with unparalleled 360-degree views. 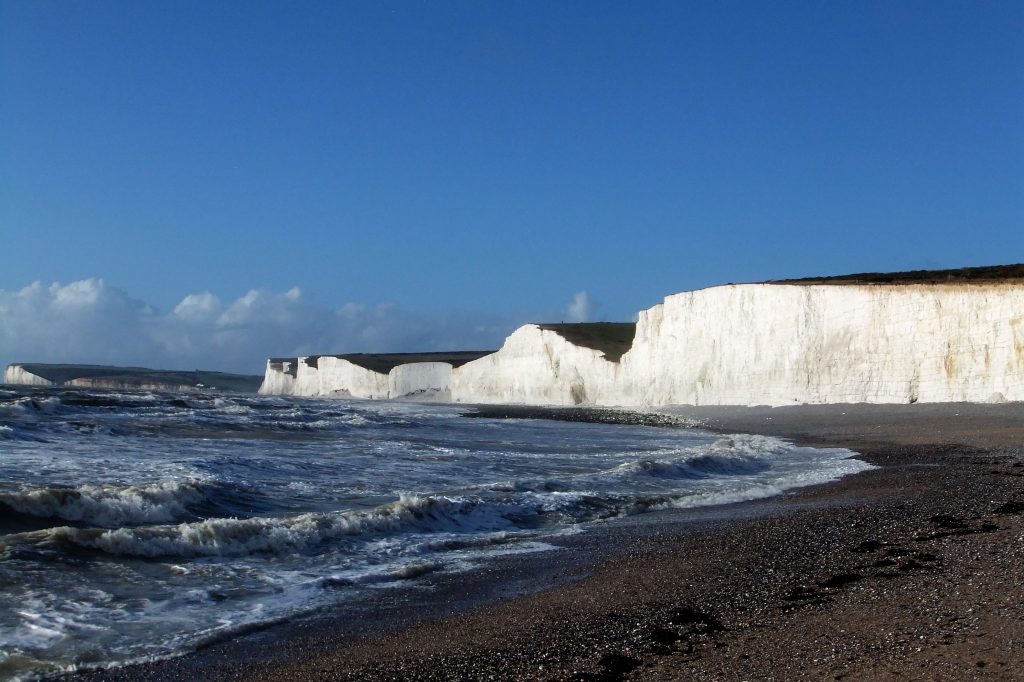 The chalk cliffs at Birling Gap are receding at an increasingly rapid rate. A foot or more of cliff face is lost every year, exposing new chalk, which is why this stretch of shoreline retains its alabaster glow.

From Birling Gap, you’ll get a spectacular view of England’s most picturesque cliffs, the Seven Sisters. On a sunny day, these undulating brows are practically incandescent. The Eastbourne Sightseeing bus will drop you off outside the Visitor’s Center and café. The café is operated by the National Trust and is an excellent spot to get out of the wind and grab a bite. Try the lamb stew if they have it.

After you’ve eaten, go down to the beach. Stand under the towering cliffs and watch the waves roll in. Then find a ledge and take a seat. Get some chalk on your butt. This is England.

1 thought on “How to Spend a Day in Eastbourne, England”