Best things to do at the V & A Waterfront Cape Town

When Queen Victoria’s son, Alfred, visited Cape Town in 1860, the port wasn’t particularly safe. In fact, so many ships were lost to storms in Table Bay that Lloyd’s of London refused to insure any vessel that overwintered there.

Alfred initiated work on a new, more sheltered harbor, and The Victoria and Alfred Waterfront was born. It remains a working port to this day, though the historic center has been transformed into a shopping and tourism Mecca that attracts close to 25 million visitors per year.

Cape Town locals tend to avoid the V & A Waterfront because it’s pricey and crowded. Tourists love it because there are lots of restaurants, hotels, museums and places to shop. It’s also a very safe area of the city—you can go there at night without worrying about crime.

I find the commercialization a bit overdone, but I do love a good historic waterfront, and there are plenty of vintage attractions to experience: the old clock tower, rusty fishing boats, a maritime museum, the remains of a Dutch fort, and much more. Plus, you never know what might tie up at the docks: I saw a Greenpeace anti-whaling ship and a Russian missile cruiser on the same day.

These are my favorite things to do at the V & A Waterfront. 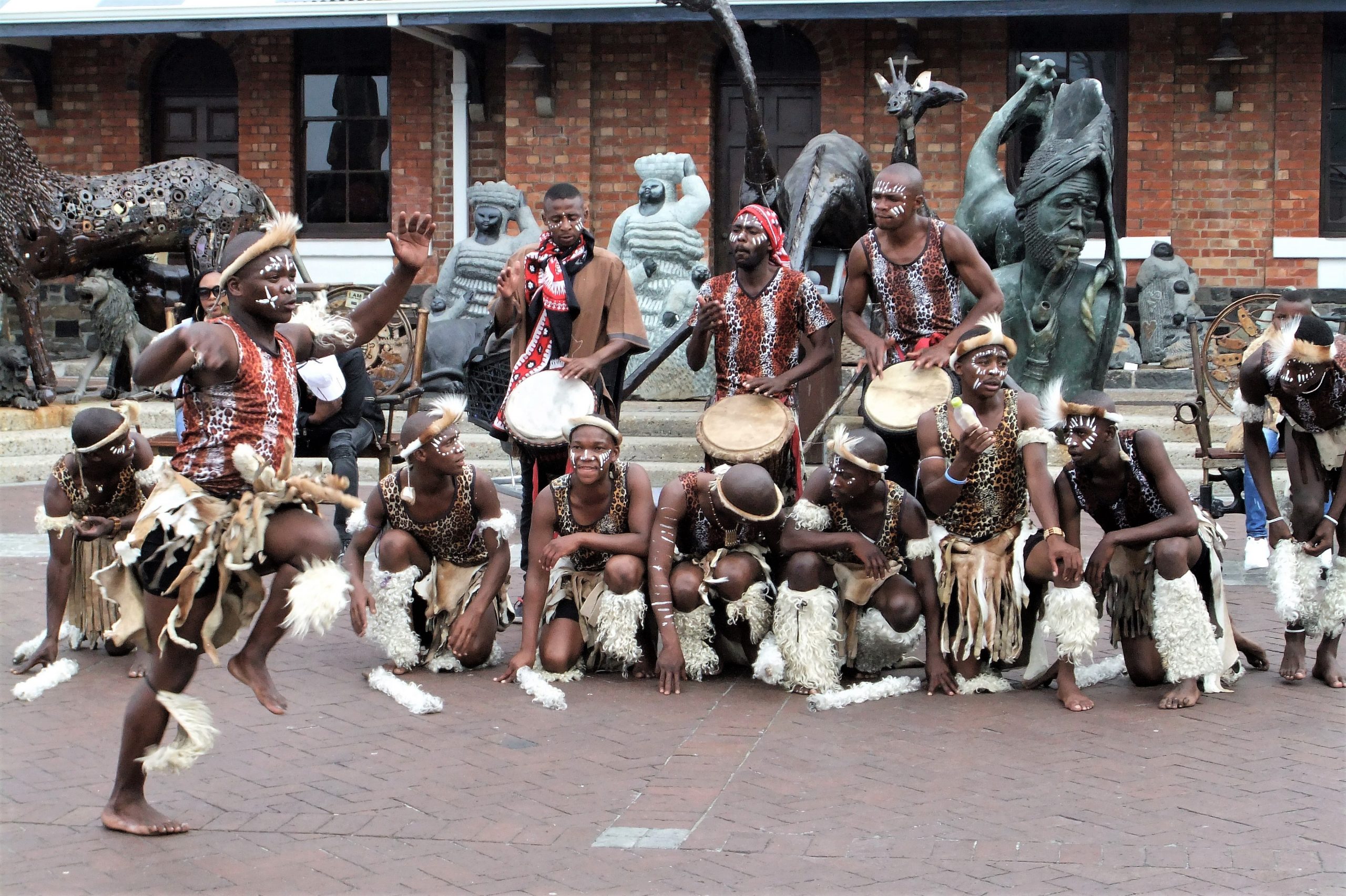 Talented buskers perform throughout the waterfront. I like the traditional dance and vocal groups, some of which appear in authentic Xhosa or Zulu costumes. The tribal dances are rhythmic, athletic and highly energetic—they always draw a crowd. You’ll also find jazz duos, folkies, rockers and sounds that aren’t even classifiable. Electro-digeridoo, anyone?

A good place to take in a performance is near the Victorian clock tower. It’s bright red, so you can’t miss it. The tower was originally the Port Captain’s office and now houses, appropriately, a clock shop.

For contemporary art and fashion with Cape Town flair, try The Watershed. Designers and artists occupy 150+ stalls and sell things you won’t see anywhere else. On the ground floor, in shop number F115 (Recycled Flip Flop Sculptures), is Davis Ndungu, an artist who works in an unusual medium: discarded flip flops. His work is colorful and fun and benefits the environment by repurposing non-biodegradable litter. He specializes in animals, but can do just about anything, and even takes requests. I bought a penguin.

Fine dining abounds on the waterfront, with restaurants like Karibu (springbok shank!) and Den Anker (Belgian seafood) leading the pack. For a rowdier atmosphere with live music and great pub grub hit the historic Ferryman’s Tavern.

The Victoria Wharf Shopping Centre, a sprawling multilevel mall, has lots of fast food joints. The usual suspects like KFC and McDonald’s are here, but there are more interesting options: fish and chips at Fisherman’s Choice, burgers at Wimpy, or flame-grilled peri-peri chicken at Nando’s.

Nando’s is a South African chain serving up tasty Portuguese/African dishes. They’re starting to spread all over the world, and for good reason—the food is delicious. The main ingredient in their signature sauce is peri-peri, or African Bird’s Eye Chili Pepper. It’s flavorful, with just the right kick. 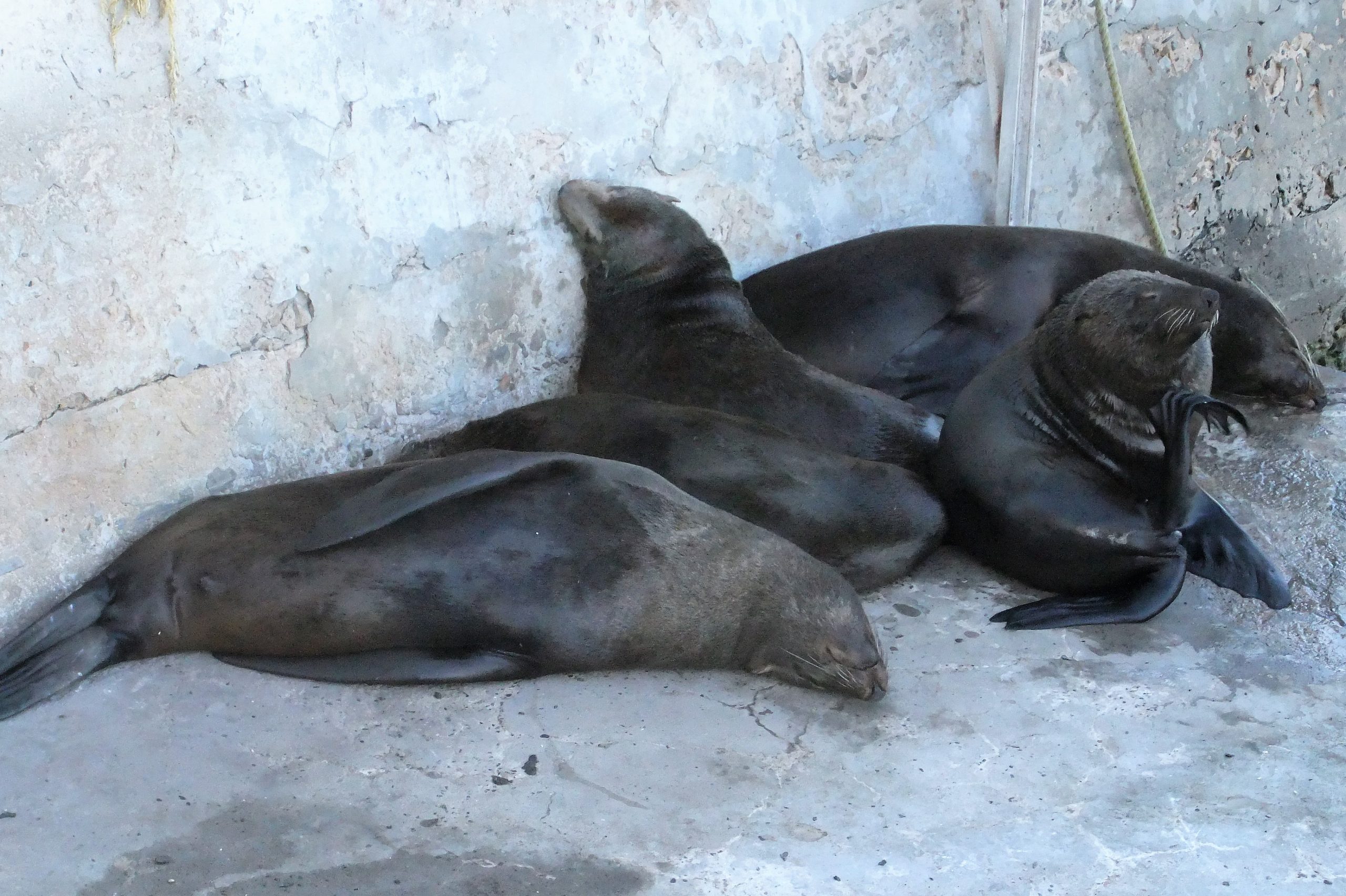 There’s plenty of nature at the waterfront, too. Look down at the big tires used for bumpers on the docks—you might see a cape fur seal curled up inside (aka, “seals on wheels”). The seals like to lounge in out of the way places, or swim around, chasing fish. You never know what you might see in the water. Back in 2016 a rare dwarf sperm whale spent a couple weeks frolicking in the harbor.

Seabirds are everywhere. Check ledges near the water for nesting cormorants. 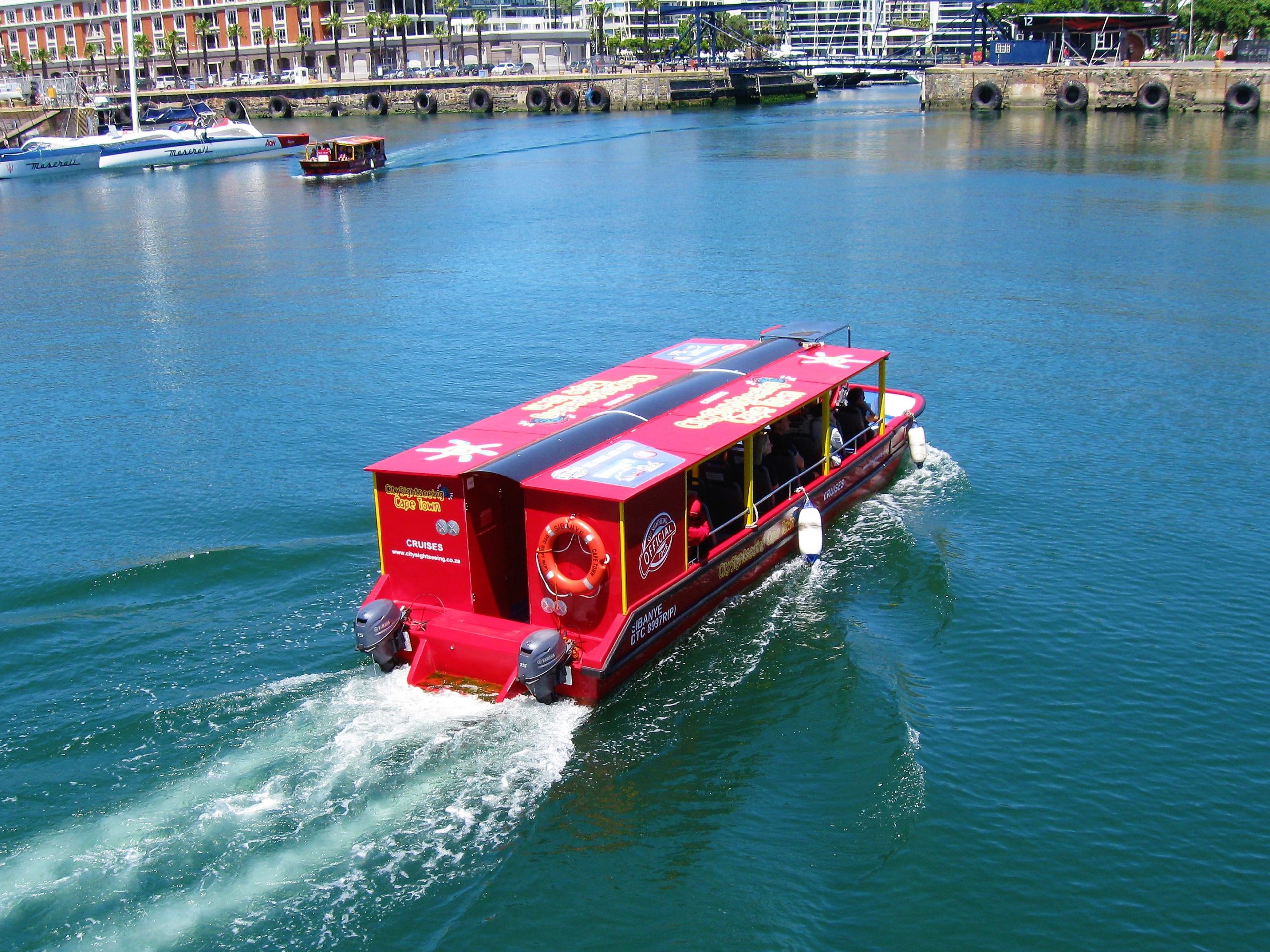 These inexpensive, half-hour boat rides are operated by City Sightseeing and come with an audio tour. There are two routes. The first takes you around the Victoria and Alfred basins, where you’ll see a variety of ships, movable bridges (Swing and Bascule), historic unloaders, and of course the harbor’s resident seals. The views of Table Mountain from out on the water are worth the price alone.

The second route passes through the canal in the newer residential section of the waterfront. Here you’ll see luxury apartments and swank inns, and maybe even spot Oprah, who has a penthouse across from the ultra-deluxe One and Only Hotel. The canals are a great place to paddle, too, and you can rent Stand Up Paddleboards at SUP Cape Town next to Battery Park. 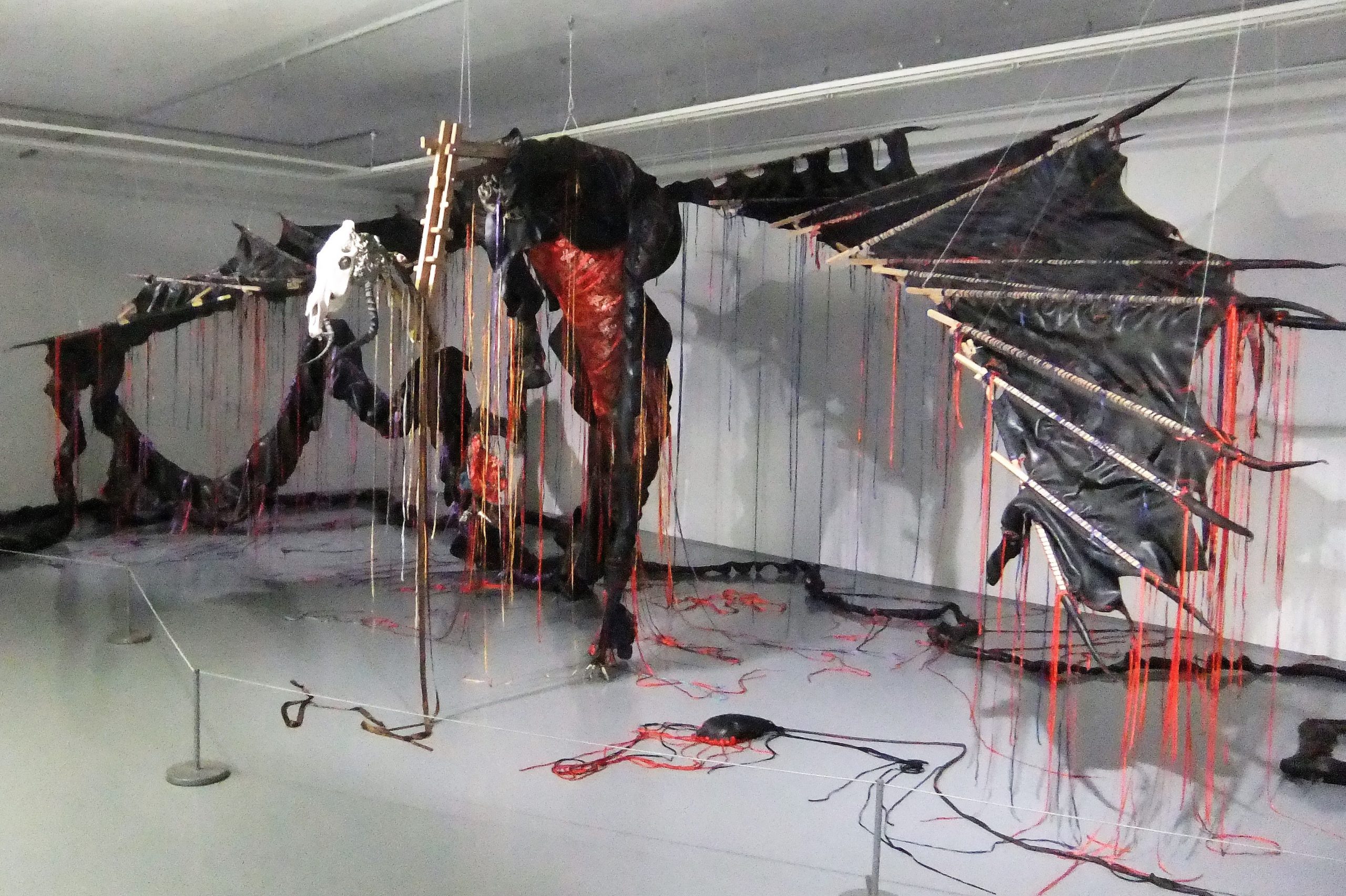 The waterfront’s newest museum is the Zeitz Museum of Contemporary Art Africa. The building, converted from an old grain silo, is a stunning architectural achievement, with a futuristic interior reminiscent of 60s sci-fi movies. I half-expected to turn a corner and find Barbarella in the Excessive Machine. Sadly, I didn’t, but I did see some of the most innovative contemporary art in Africa. My favorite was Nicholas Hlobo’s rather frightening “Limpundulu Zonke Ziyandilandela” (“All the Lightning Birds Are After Me)—a massive, skull-faced flying nightmare based on a legendary South African dragon.

Aficionados of the sea won’t want to miss the Iziko Maritime Centre. Lots of ship models are on view, along with memorabilia from the various passenger lines that used to service Cape Town. I loved the vintage Union-Castle menus. The museum is tucked away above a bank and is usually cool and quiet—perfect for a respite from the crowds and heat outside.

The Chavonnes Battery Museum is housed in the foundation of the 18th century Chavonnes Battery, a Dutch fort that once protected the harbor from would-be invaders. You can poke around the archaeological excavation downstairs or check out the rotating exhibits on the ground floor. The folks who work here are wonderfully welcoming and have been known to talk visitors (me) into posing for photographs in funny Dutch hats.

The 3-story Nelson Mandela Gateway is the ferry terminal for tours to the infamous prison on Robben Island. It’s also a museum documenting the history of South Africa’s racial segregation policy, Apartheid. I recommend showing up for your Robben Island tour early, so you’ll have enough time to check out the museum exhibits before boarding the ferry. 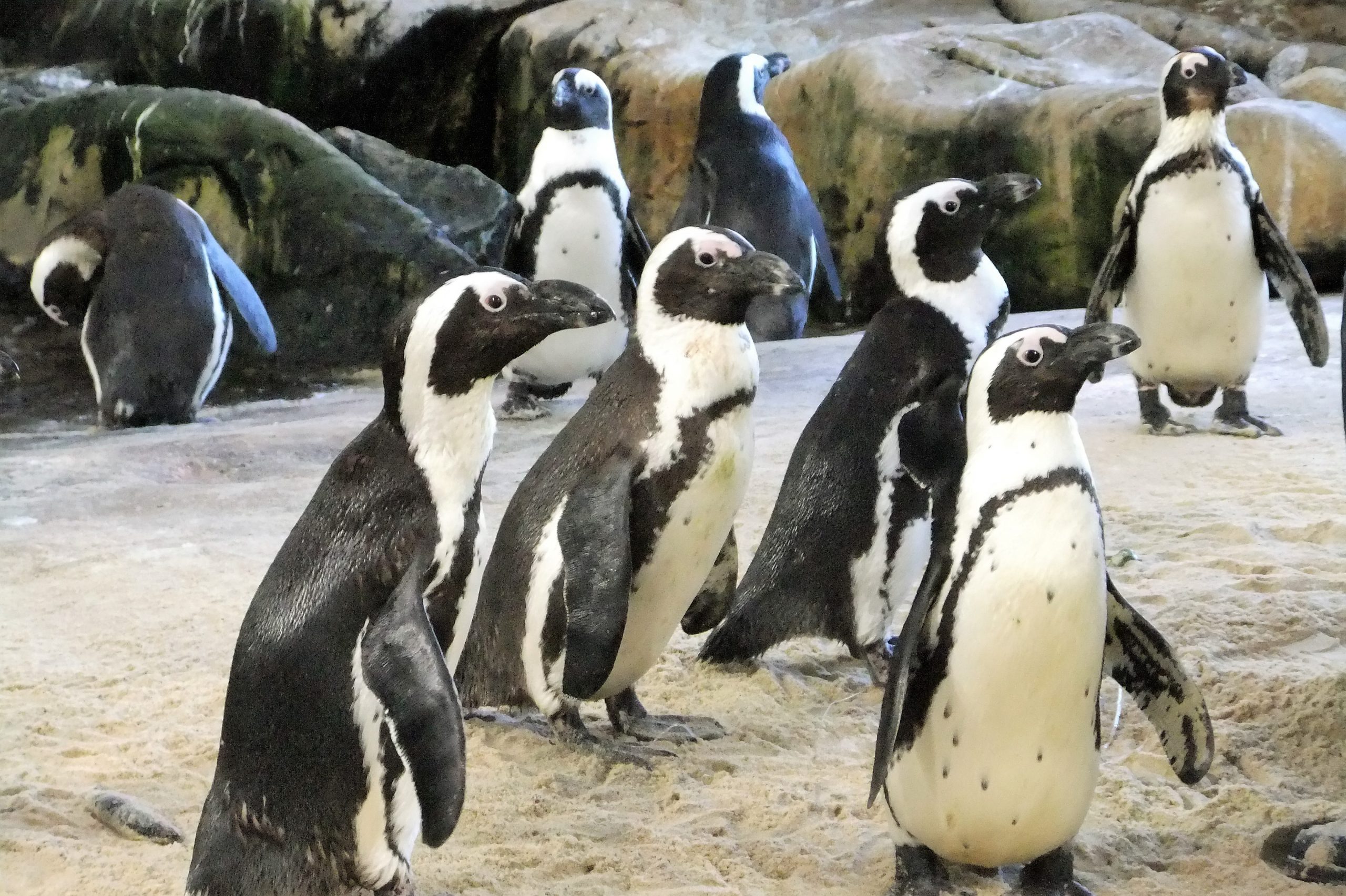 This incredible aquarium focuses on sea life from South Africa’s two oceans—the Atlantic and the Indian. There’s also a small collection of native freshwater fishes, including the endangered Berg River redfin minnow.  Walk through a 33-foot tunnel as sharks and rays swim overhead, feel a starfish in the Touch Pool, or interact with African and Rockhopper penguins. If you can’t make it to Boulders Beach or Robben Island to see African Penguins in the wild, this exhibit is an excellent alternative.

My favorite part of the aquarium is the Kelp Forest. Towering strands of kelp sway as strange fish weave in and out—it’s truly mesmerizing. 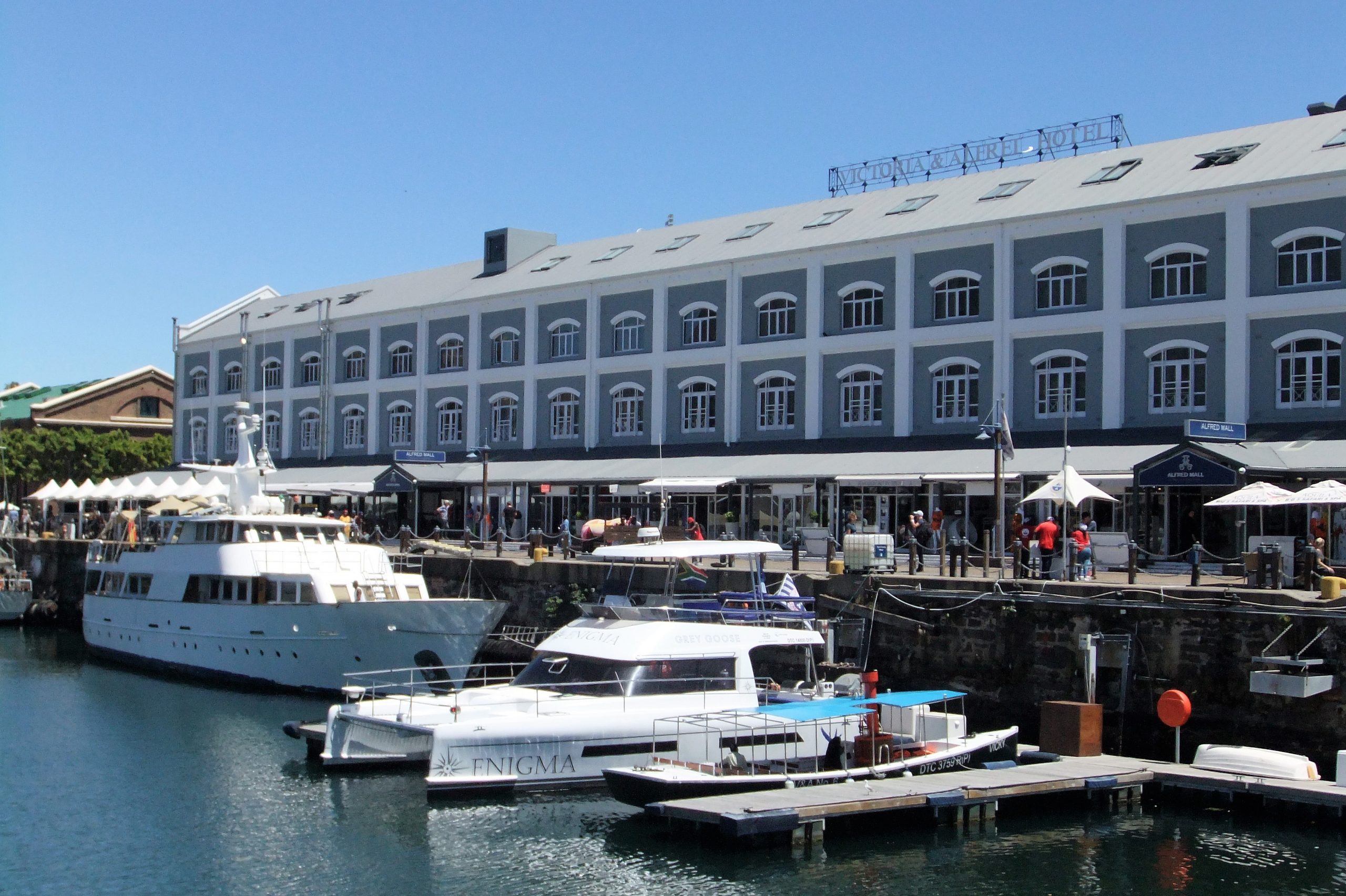 You’ll pay a premium to stay at the V & A Waterfront, but if you feel like splurging there are some great options. I like the Victoria and Alfred Hotel because it epitomizes Cape Town’s commitment to repurposing great old buildings. This luxurious hotel was originally the 1904 North Quay Warehouse. Onsite shopping opportunities are plentiful, and dining at the restaurant, Ginja, is top-notch.

After you’ve done the Waterfront, check out these fun daytrips on the Cape Peninsula.