Cape Town is surrounded by spectacular landscapes. A drive down South Africa’s Cape Peninsula leads to craggy mountains, turquoise bays, and beaches populated by waddling penguins. Stop for a glass of Cabernet at South Africa’s oldest winery, or do some surfing in Muizenberg. At the end of the road, you’ll find the Cape of Good Hope, the southwestern tip of the continent. Stare out over the churning Atlantic and imagine a Dutch galleon turning the corner, heading for India. 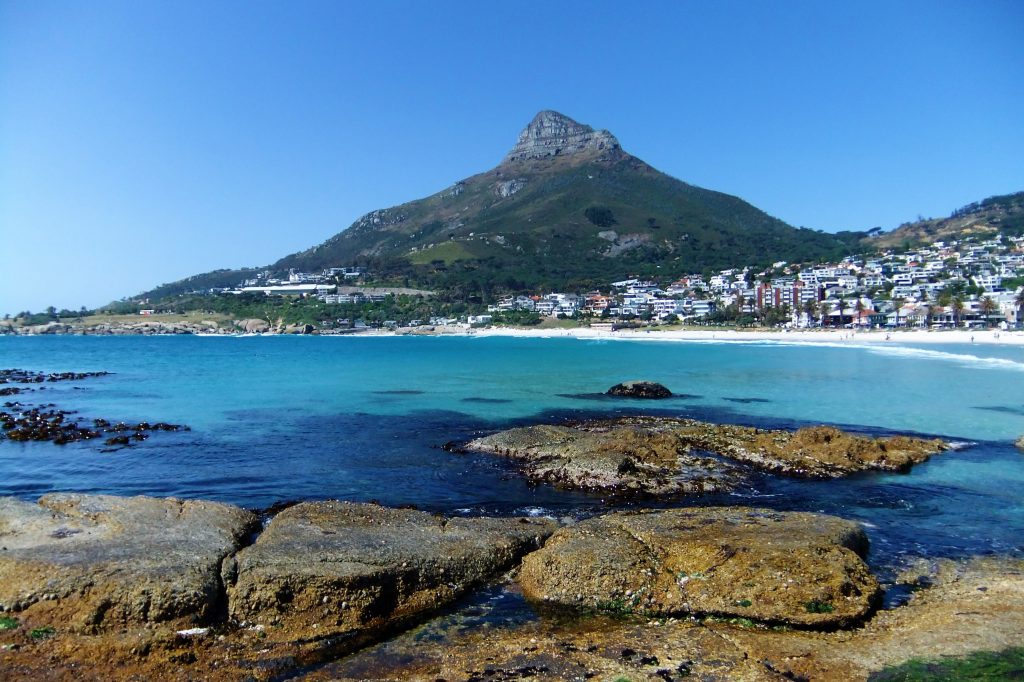 South of Cape Town, just past Lion’s Head, is Camp’s Bay. Though the Atlantic waters are gorgeous here, I don’t recommend swimming in them. Chunks of ice break off in Antarctica and ride the frigid Benguela Current up the coast. Most people jump in for a brief cool-off, then run wailing back to shore.

But it doesn’t matter. Stand on the glistening sand and look around. Lion’s Head towers to the north and the Twelve Apostles ridge runs south giving Camp’s Bay a backdrop that makes photographers drool. I like to climb the boulders beside the beach, searching for sea life, watching the kelp sway.

On the strip, you’ll find lots of bars. Get a drink and relax as the sun melts into the Atlantic. If you don’t feel like going back to Cape Town (and there’s a good chance you won’t) there are a number of boutique hotels at Camp’s Bay, with nice warm swimming pools. 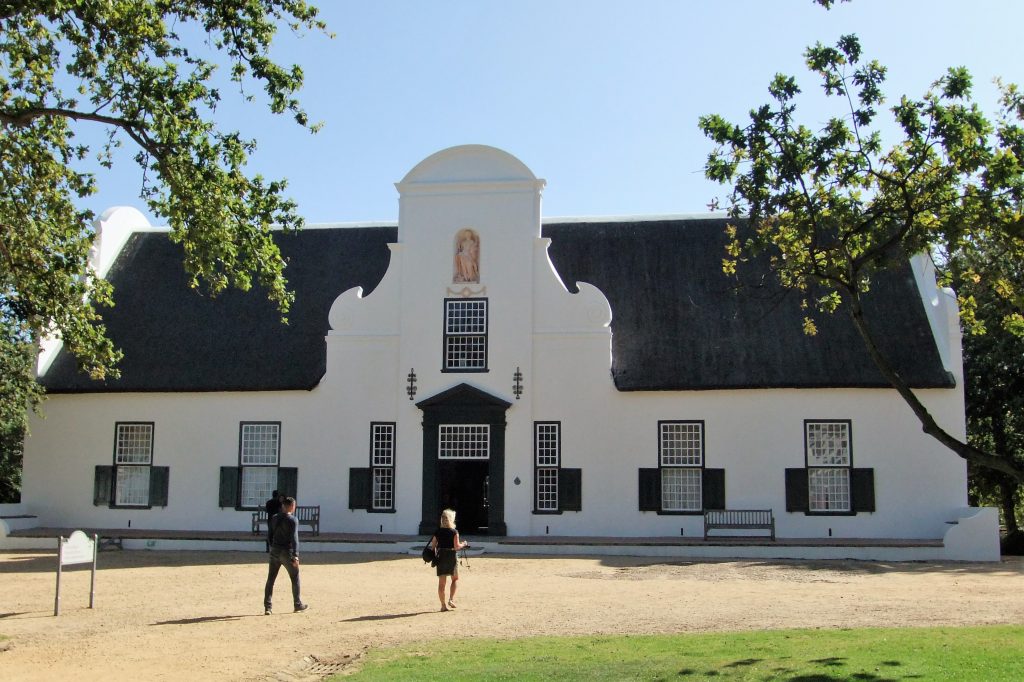 Groot Constantia’s most famous product is Grand Constance, a sweet blend of white and red Muscat that’s been favored by royalty and celebrated by authors for three centuries. Napoleon craved it so much he kept a supply on hand during his final exile on St. Helena.

There’s a wine museum at Groot Constantia and tastings and tours are available. I love the pork belly at their restaurant, Jonkershuis. You can dine outside, under umbrellas, but watch out for marauding baboons. Attempting to feed them could result in a highly unpleasant mugging. 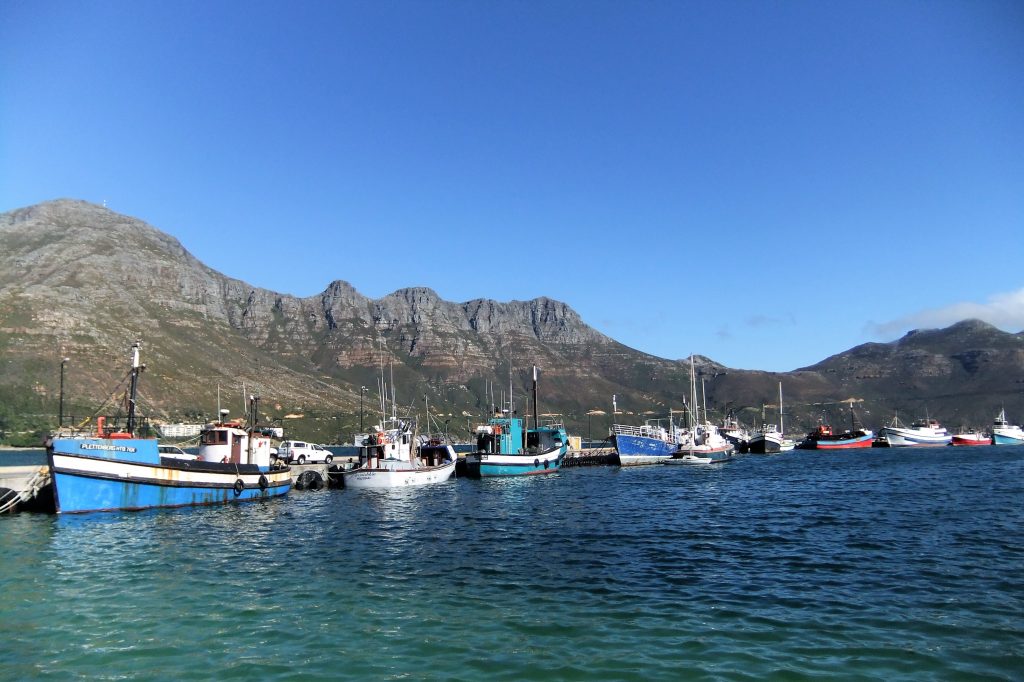 Back in the 1980s, the seaside community of Hout Bay declared itself a republic. They even issued passports. It was all a marketing ploy, of course, but a fun one. You can still get the passports—just stop by the gift shop at Mariner’s Wharf. They only cost a couple of bucks and are great souvenirs.

While you’re at Mariner’s Wharf, have some seafood at the Wharfside Grill. You could easily spend an hour wandering around this nautical-themed restaurant, studying all the exotic antiques and marine bric-a-brac on display. If you’re into places like The Warehouse in L.A., you’ll dig Wharfside Grill. The food’s good, too. I’m a sucker for any kind of fish cooked in their spicy butter sauce, but the yellowtail is superb.

Cruises to Duiker Island leave from Hout Bay. You’ll see (and smell) a lot of Cape fur seals there. 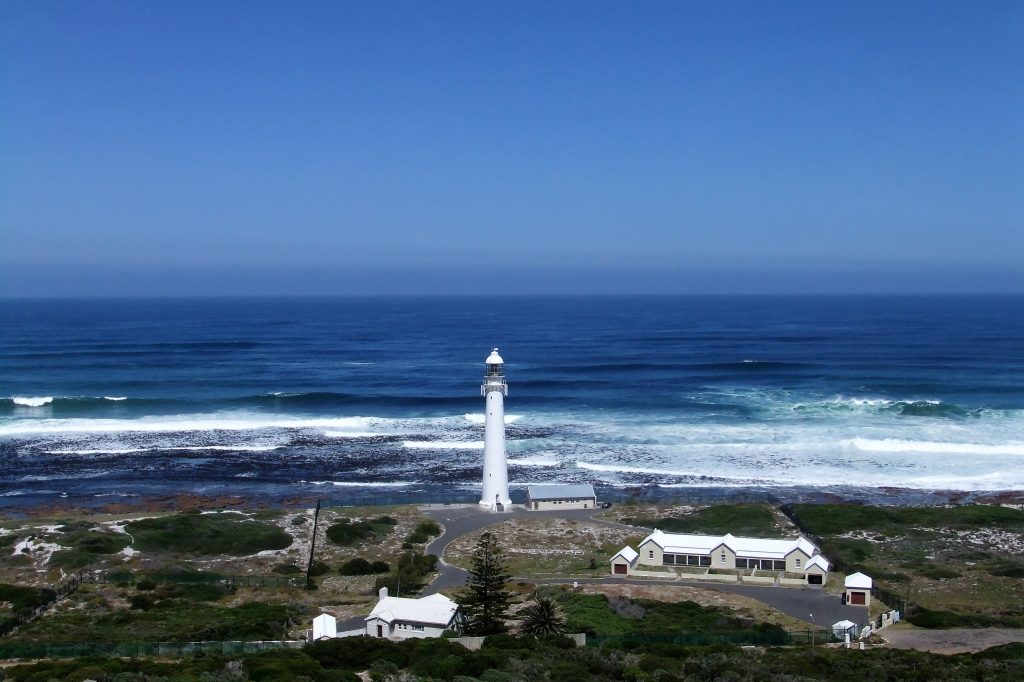 Heading south along the coast from Hout Bay you’ll come to a white lighthouse. This is Slangkop, commissioned in 1919 and still in use. Though the light is fully automated now, a keeper remains on hand to greet visitors.

From the lighthouse, you can hike or drive inland to the village of Kommetjie. If you’re hungry and want to stick with the lighthouse theme, stop in the Lighthouse Pub & Grille on Main Road. They serve a classic South African dish called bunny chow. It was invented by Indian laborers in Durban, who hollowed out half a loaf of bread and filled it with curry. The Lighthouse does a kota (quarter) loaf with beef curry, which is more than enough to make a meal. Burgers, pies, ribs, steaks, and plenty of other pub grub are available too.

Work off your bunny chow with some mountain biking, crayfishing, or diving. Numerous shipwrecks occurred along the rocky Kommetjie coast, and there are lots of kelp beds to explore. Don’t forget your wetsuit—the Benguela Current keeps these waters cold year-round.

This aptly named village lies on a windblown stretch of coast known for its mist-shrouded cliffs. This is where you go to escape Cape Town crowds and unwind in nature. There are no stores or restaurants, and only a few low-key accommodations. Villa Misty Cliffs offers unparalleled ocean views, steps from the sand.

Kite surfing is big here. The sky is often filled with colorful kites, attached to surfers, who launch like marionettes over curling waves. 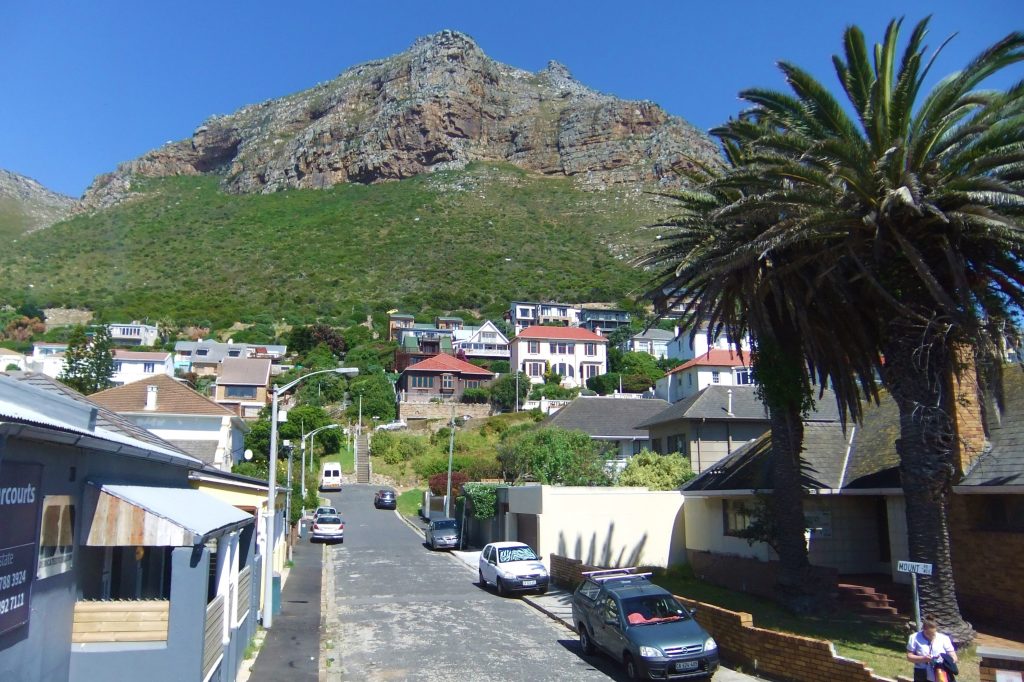 This laidback surf town on False Bay (east side of Cape Peninsula) is known for its crowded beaches and bohemian culture. There are a number of surf schools here that offer affordable lessons. Gary’s has been around since ’89 and caters to every level of surfer, from beginners (one on one lessons) to Endless Summer types looking to book surfing safaris anywhere in South Africa. 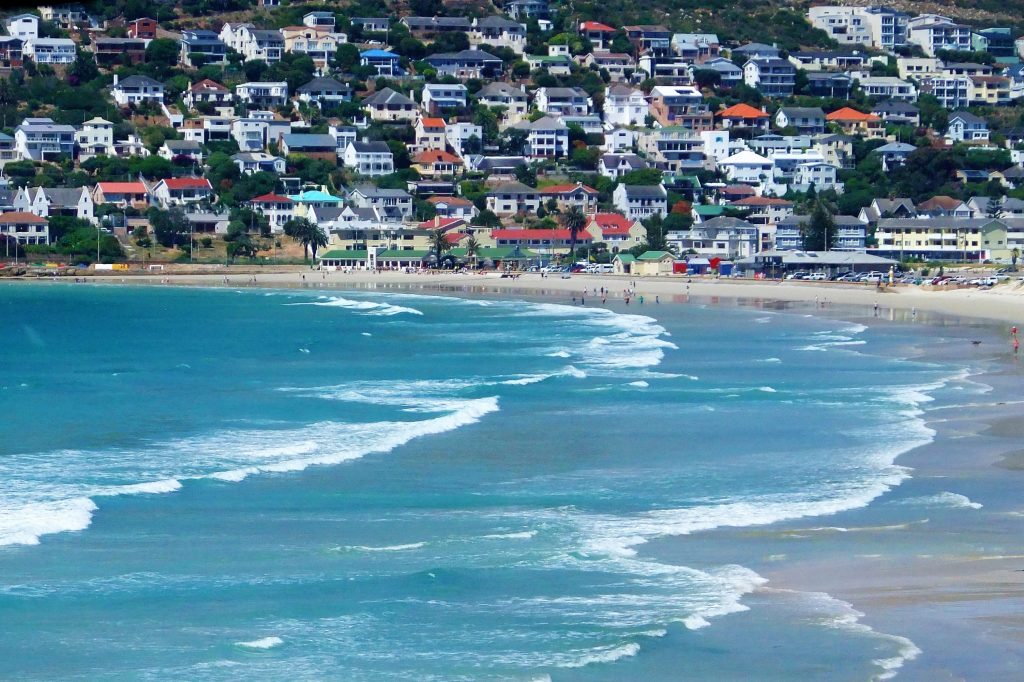 Fish Hoek is south of Muizenberg, also on False Bay. Waters on this side of the peninsula are warmer, and people actually use the beaches for swimming. So do Great White sharks, occasionally, so be sure to obey warning flags and closures. If you’d feel safer on land, there’s a coastal walkway (Jager Walk) that will take you along the shore as far as Sunny Cove. It’s paved and wheelchair friendly. You can fish, whale-watch or snorkel in rock pools.

I was lucky to spot a crew of trek fishers at Fish Hoek one day. This centuries-old fishing method (a huge net is rowed out to sea, then hauled in by a crew of up to 25 men), is a rare sight on the peninsula these days, thanks to increased restrictions and competition from night trawlers.

If you find yourself craving a taste of what’s in those nets, hit up Fish Hoek Fisheries on Main Road for some classic fish and chips.

Simon’s Town has been home to a naval base for over 200 years, but you don’t have to be a sailor to appreciate its charms. The town’s Victorian center, known as the Historical Mile, contains some fine examples of architect John Parker’s “Broekie Lace” cast-iron design. Check out the balconies on his British Hotel.

There are a few interesting museums in Simon’s Town, one dedicated to the town’s history (Simon’s Town Museum), another to the Navy (SA Naval Museum), and a third to antique toys (Warrior Toy Museum).

Head to Seaforth Beach for a dip and a bite at Seaforth Seafood. Currently, there’s a small group of African penguins hanging out there, too. If you’re up for a bit of exercise, consider a kayak tour at the Shark Warrior Adventure Centre. You’ll paddle down the coast to the penguin colony at Boulders Beach. 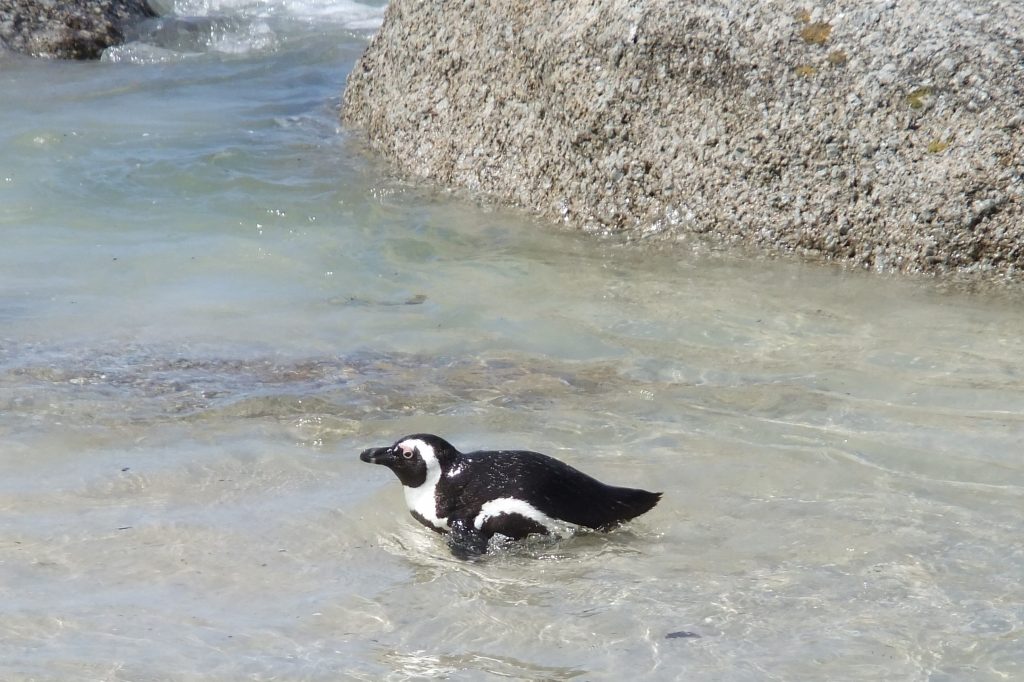 This beach, just south of Simon’s Town, gets its name from the massive granite boulders found along its shoreline. Amidst the boulders lives a large colony of endangered African penguins. You can get quite close and even swim with them in some areas, but be cautious—these are wild birds with very sharp beaks.

Boulders Beach has an entrance fee (under 10 USD). Well worth it to mingle with over 3,000 penguins!

This legendary headland was first rounded by Portuguese explorer Bartolomeu Dias in 1488, establishing a trade route between Europe and Asia. There are a couple of widespread misconceptions about the Cape of Good Hope. If you want to impress the locals, get your facts straight before going.

Now that that’s out of the way, you can enjoy your visit. I recommend stopping at Cape Point first. A lighthouse can be reached by funicular (The Flying Dutchman) or hiking trail. From there, you’ll get the best views of the Cape of Good Hope.

You can hike or drive between the two points and possibly see wildlife on the way. This national park is home to antelopes, Chacma baboons, 22 species of snakes, 250 species of birds…you might even spot a zebra. My favorites are the ostriches, who run (at up to 43 mph!) along the water’s edge. It’s rare to see these big plains-dwelling birds in such close proximity to the ocean.

The Cape of Good Hope is rocky and windy. The ocean glimmers in the sun. Hang out for a while and take it all in.

If you’re staying in Cape Town while exploring South Africa’s Cape Peninsula, check out these things to do in the Mother City.

If you’re on a tight budget, read these tips for traveling in South Africa on a budget.