My mother crossed the border of the United States for the first time in her life two years ago. It was to visit me during one of my off-season excursions. When I owned the cafe on Chokoloskee Island in Florida, I often traveled in the summer months when my business was closed. 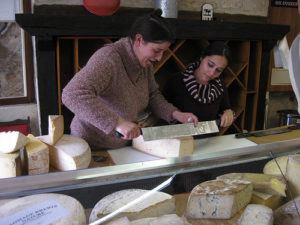 I recall my usually insightful mother saying how she looked out the airplane window for her first glimpse of foreign soil and mused, they have the same dirt. As if dirt would be an entirely different substance over here. I laughed when she marveled at how the baby of foreign speaking people played the same peek-a-boo game as American babies. Not realizing the whole purpose of the game is to play with a child not yet old enough to speak any language.

I laughed at her not because of the foolish thoughts, I mean I’d had those too. My first trip to England led me to Brighton Beach, which wasn’t a sandy beach at all, but a coast with lots and lots of rocks almost like you’d find in a playground. I thought, why, and better yet, how did they put these here? My brain process makes perfect sense to a person who’s only seen natural sandy beaches and man-made rocky playgrounds.

But to the rest of the knowing world, the idea that people would haul enough rocks to cover an entire shoreline is evidently absurd. So I understood my mother’s mindset. It was just funny to see her where I had been years before on my first trip across the ocean.

I’m living in France now, for the next year or two. Since moving here, I’ve found many occasions to throw myself the same condescending smile I gave my mother. It doesn’t matter how much you’ve traveled, when in a new world, you think and regretfully say the craziest things.

I’ve recently been wondering why this is so and I think I can give two pretty good explanations. The first is that, for me at least, traveling represents adventure. I expect everything to be dazzlingly different. So I’m always surprised when the ordinariness of life meets me in my exotic travels. You mean dogs bark here too? Truly, some of the most surprising finds are not the differences, but the similarities, because you’re not expecting things to be the same.

The other instigator of complete foreigner stupidity is the consistent discovery that basic facts are not at all facts. Like the fact that hammers have two sides, the hitting side and the forked extracting side. This is not something I remember learning; it’s just something that Is. Do I know how to put a nail in the wall to hang a picture? Yes. Do I know how to do this in France? No. Here, hammers are missing the forked side, like mini sledge hammers, like pencils without erasers. How do you get the nail out if you make a mistake? I can’t say.

Basic facts about drinking have since been disproved as well. To have a beer does not mean to hold and sip as often as you like. I noticed this when Alain and I were at a small working-class bar where all the tables had been moved outside for the summer solstice festivities. Grilled sausages could be had and beer and cocktails circulated. It was summer, it was outside, we were grilling. Yet every single person sat in a chair with a drink on the table, not even a hand around the glass.

I thought, if I was at Leebo’s in Everglades City there’d be people wandering about all with drinks in hand, some even double fisted. Suddenly the beer glass I had been clinging to became extremely apparent to me and I felt the need to put it on the table. But that felt even stranger so I picked it up again. My lawlessness lasted a mere seconds before I decided to conform and set the glass back down on the table.

Then the singer broke out with an REM song, albeit with a hint of Frenchness. “Zat’s me in zee corner, zat’s me in zee spaut light loosing my reeleezgion.” It was like my own personal soundtrack, wondering how much of myself I stood to lose by relearning all the facts of life.

So this is my new foundation; a world turned backwards and inside out. Even as I type I see the “A” coming out as a “Q” because French keyboards have some letters in different places. When the simplest things that you understood as common sense fail to work for you, something bizarre (to use a French word) happens to your frame of reference and you begin to question the very laws of nature, like the make-up of dirt I suppose. I’m not sure I even know how to walk down the street anymore. In French, to convey that I miss home I have to say, home misses me very much.

Then just when you begin to expect all things to be alien–all of life–the strangest thing happens. You realize some things are the same. And then you say it out loud because it’s just such a profound discovery. Like the other day when I was at our little grocery shop I noticed the woman in front of me had a scrap piece of paper with the things she needed scribbled down. I caught myself, but truly, I almost remarked out loud how strange it was that she used, gasp, a grocery list, just like us. I don’t know, I guess because the shop was so small or something, or because people tend to shop everyday or I don’t know, they just do it differently. So the list seemed extravagantly the same.

In a way, my expectations for everything to be magically different, for the adventurer in me, translates as hoping for things to be better. I guess I was hoping to suddenly be a morning person. But no, motivation is just as hard to come by here in France. Loneliness and purposelessness float around here too. I walk the same, lay down and wake the same. Gravity pulls just as heavy and all the same things I struggle with at home are here. And you know, they have the same dirt.

Avery Sumner lived on Chokoloskee Island for seven years where she owned the store begun by C.G. McKinney in 1890. She lived in France for two years after that and currently resides in northern Georgia with her French husband Alain.

3 thoughts on “The Same Dirt”