Top Things to do in Hobart, Tasmania (Australia)

Nearly half of all Tasmanians live in Hobart, Australia’s southernmost state capital. The city began as a penal colony for British convicts (stealing a watch in London could get you transported to the end of the earth in 1804) and has evolved into a major port town with fine museums, easy access to nature, and some of the best seafood on the planet. Here are the top 14 things to do in Hobart, Tasmania. 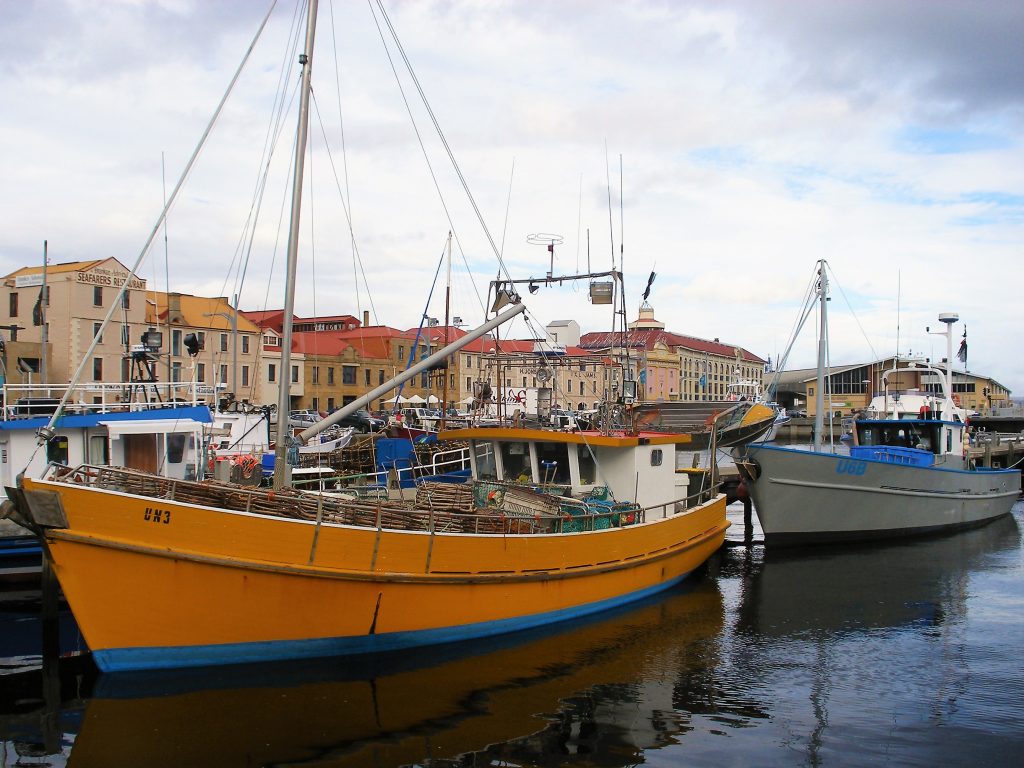 This is where you go for that incredible seafood. Fishing boats unload heaps of lobster and fish you’ve probably never heard of (Hapuka? Gummy Flake?) onto floating stalls whose prices are scrawled on chalkboards. You can take a fillet home or get it fried up with chips. 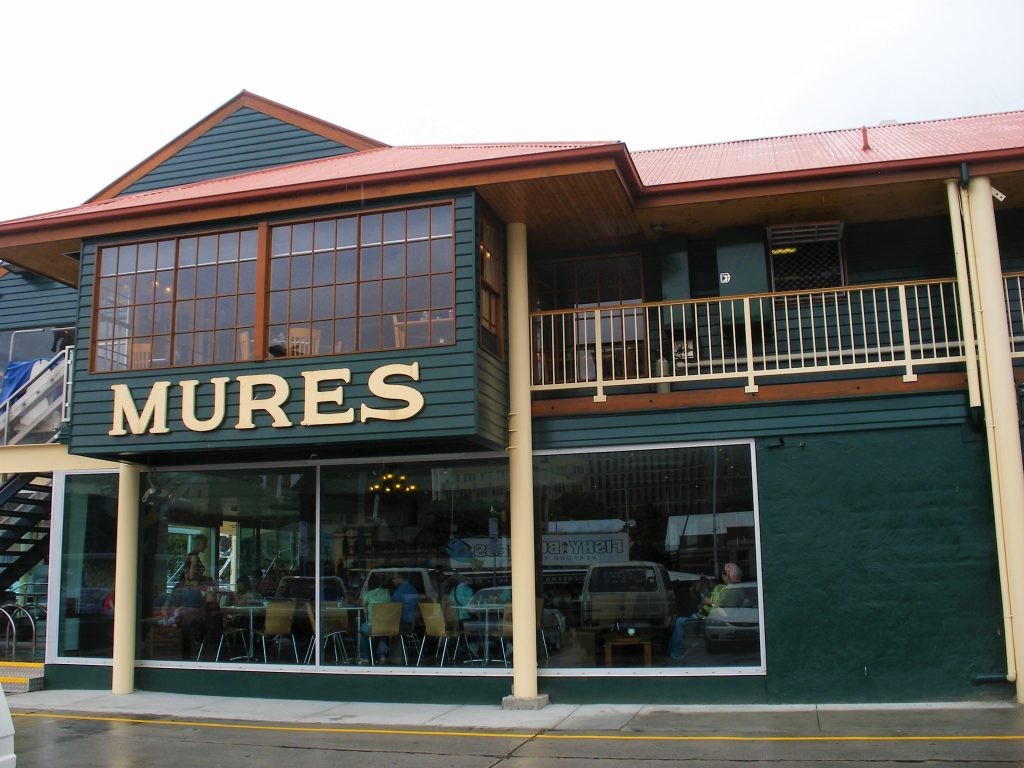 The waterfront isn’t all fish stalls. There are plenty of fine dining establishments, and Mures is my favorite. Mures doesn’t order fish from a wholesaler—they go out and catch them (with hook and line) on their own boat.

There are two levels of dining at Mures. For white tablecloths, fancier fare, and higher prices, head to the Upper Deck. The Lower Deck is less formal and less expensive: oysters, seafood pies, salads, wraps, and grilled or fried fish. 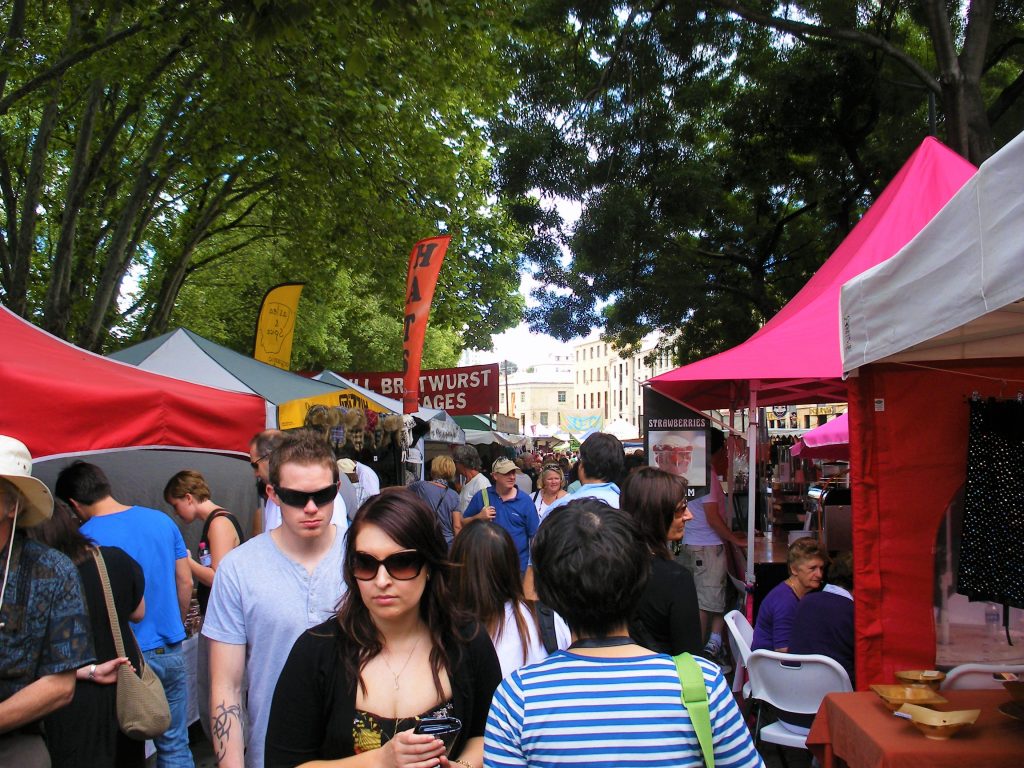 The old warehouses of Salamanca Place have been converted into boutiques, theaters and trendy hotels and bars, so even if the market’s not on, there’s always something to do. 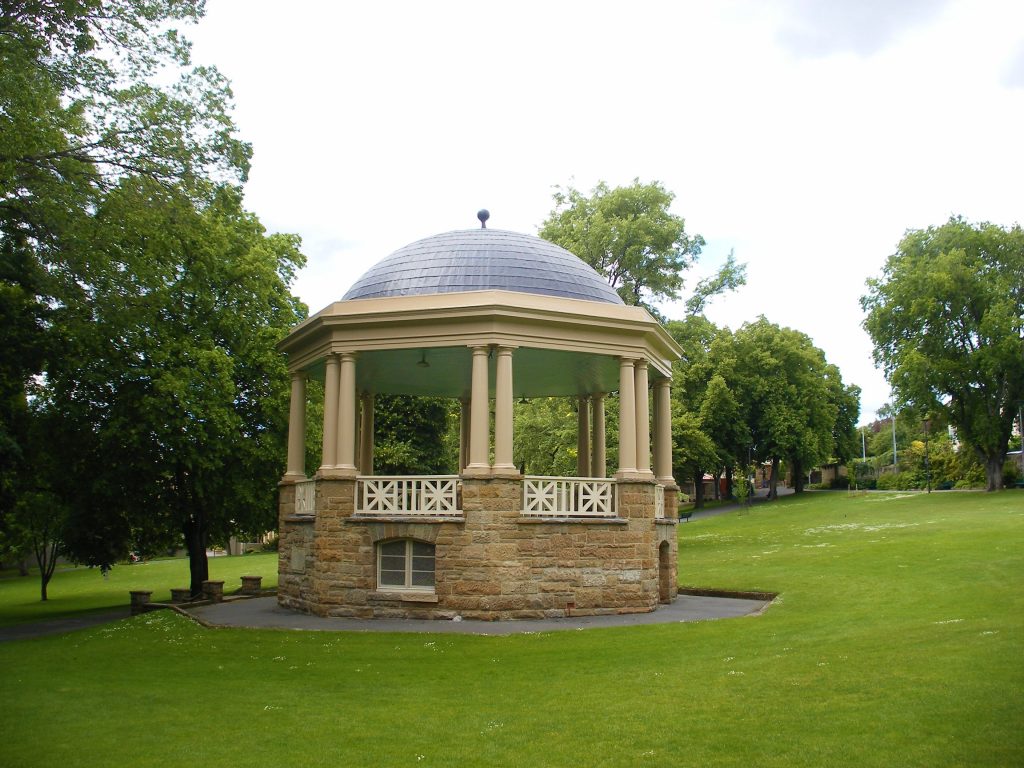 This leafy park was once Hobart’s first cemetery. The colony’s founder, Lieutenant Governor David Collins is buried here, along with other early settlers. The last interment took place in 1872, but the grounds didn’t officially become a public park until 1919. Most of the deceased remain under the grass—their headstones have been incorporated into a memorial wall, which provides a fascinating look into Tasmania’s colonial history. 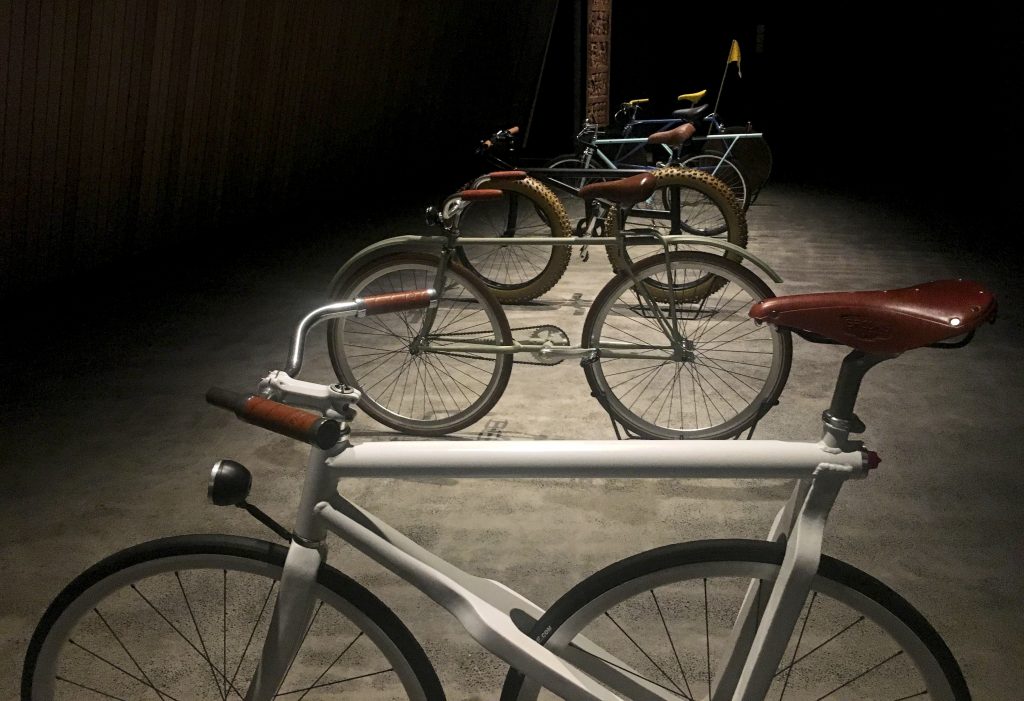 Though there’s art going all the way back to ancient Egypt, most of the space is devoted to contemporary work. You’ll see Wim Delvoye’s controversial Cloaca Professional, a machine that simulates digestion, poop and all.

The museum has a ferry service leaving from Brooke Street Pier in Hobart. The ferry takes about a half-hour, and, like Mures, offers an upstairs/downstairs experience. Downstairs you sit on benches shaped like sheep and tigers. Upstairs you enter the Posh Pit, with “complimentary drinks, canapes, and inflated egos. Rattle your jewelry for attention.” 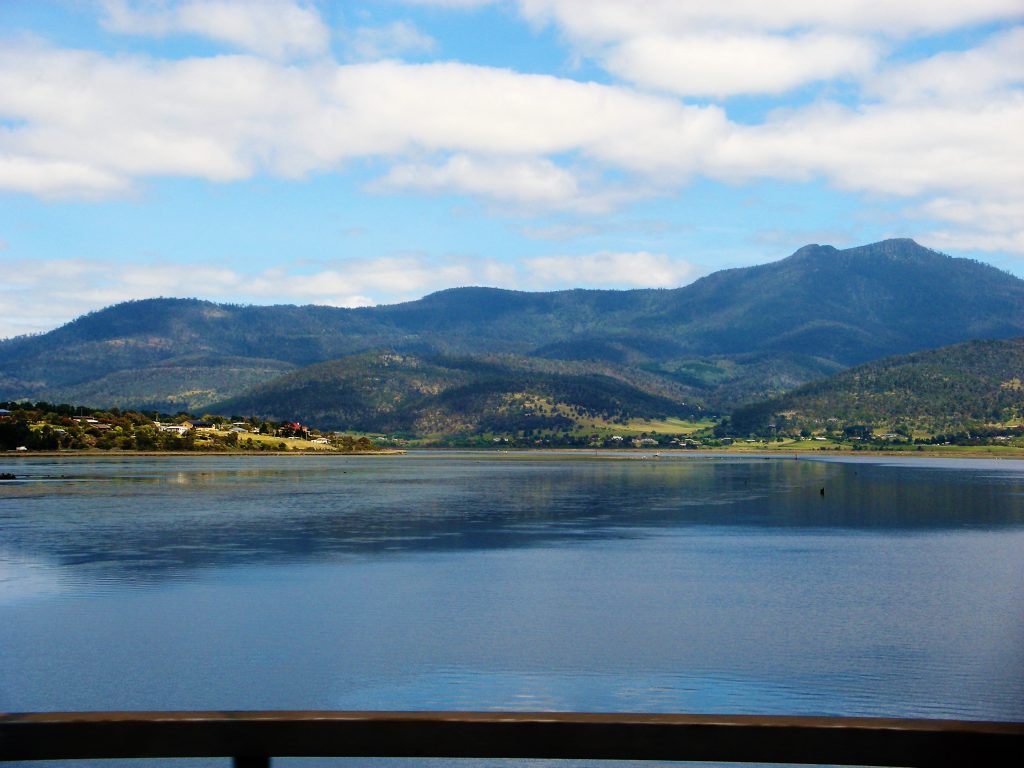 This is the river you’ll cruise on the way to the MONA museum. The Derwent originates at Lake St. Clair in central Tasmania and dumps into the Tasman Sea. Hobart’s port, one of the deepest in the Southern Hemisphere, is located on the Derwent Estuary.

Fishing and boating are popular on the river, and you might even spot a whale. Minke, Humpback, and Southern Rights have been feeding, and sometimes giving birth, in the Derwent in recent years. 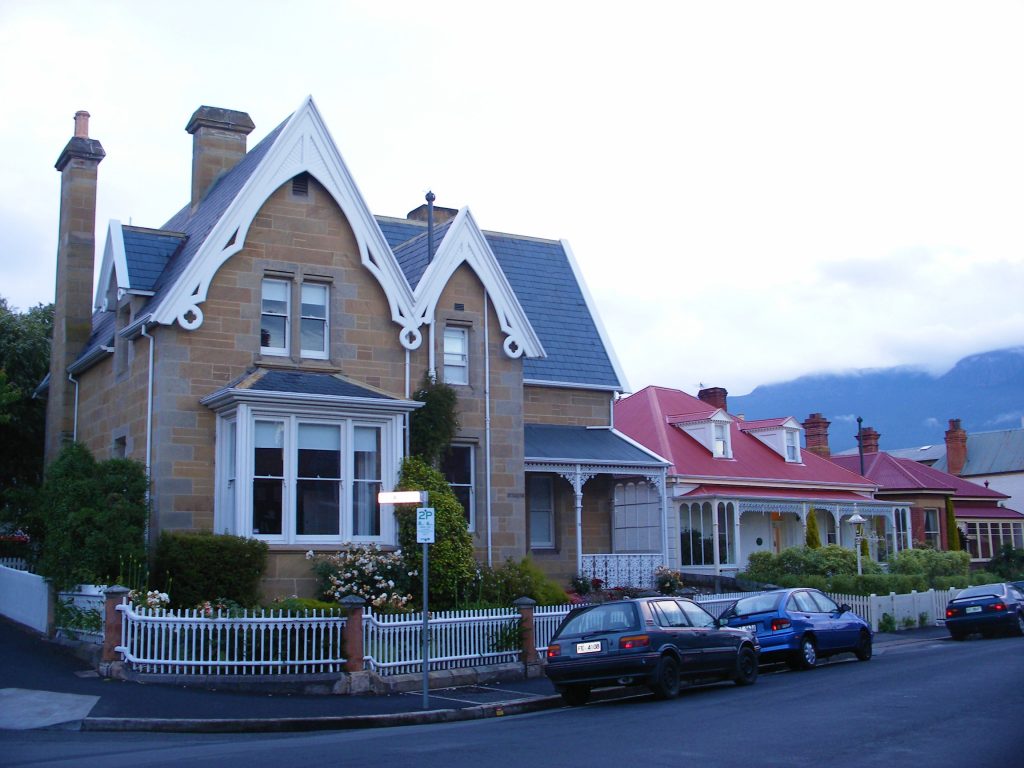 Battery Point is Hobart’s best-preserved historic neighborhood, with colonial buildings dating back to the early 1800s. To get there, climb Kelly’s Steps from Salamanca Place. Hampden Road is the main street in Battery Point, where you’ll find casual eateries like the Prince of Wales pub and Pollen Tea Room.

The Shipwrights Arms Hotel (aka “Shippies”) is on Trumpeter Street, and has been since 1846. The food’s a bit pricier than typical pub grub, but quite a bit better, too. The lamb, steak and seafood (of course) are all topnotch. 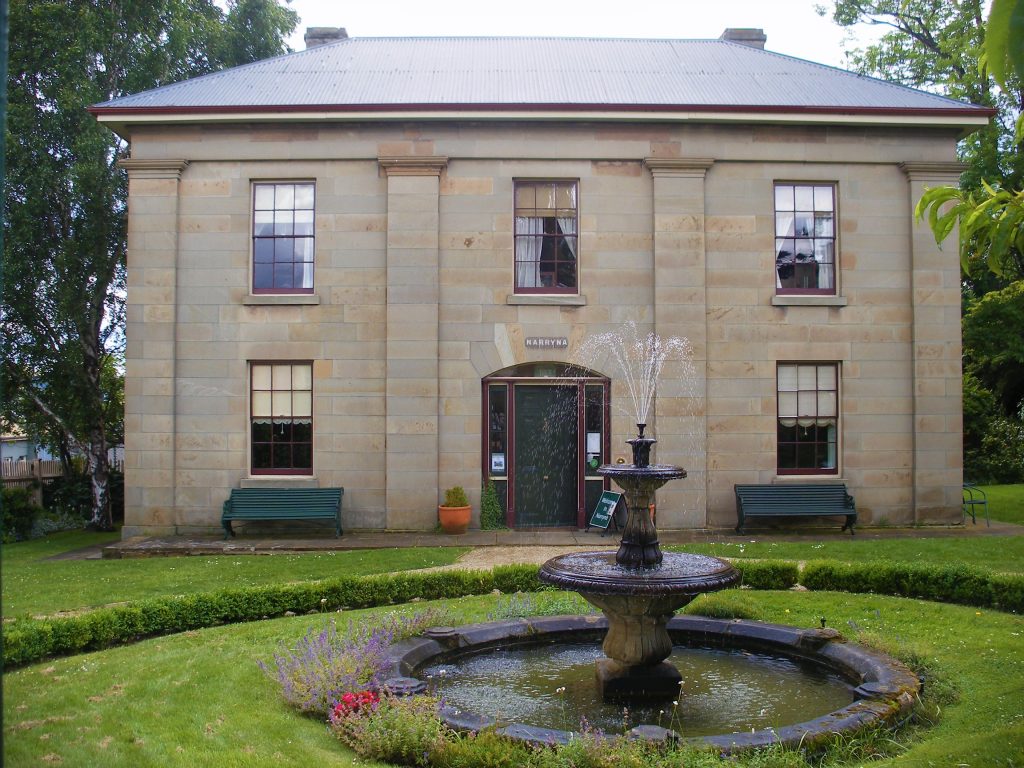 Captain Andrew Haig stopped in Hobart, en route to Valparaiso, for ship repairs in 1824. While in town, he bought property and later returned to build warehouses and a home in Battery Point.

This exquisite Georgian house, Narryna, was completed in 1840, but two years later Haig went bankrupt and had to sell it. Since then, it’s been a home to prominent Hobartians, a boarding house, a doctor’s office, and, now, a museum filled with period furniture, paintings, jewelry, and, in keeping with Narryna’s nautical roots, scrimshaw. 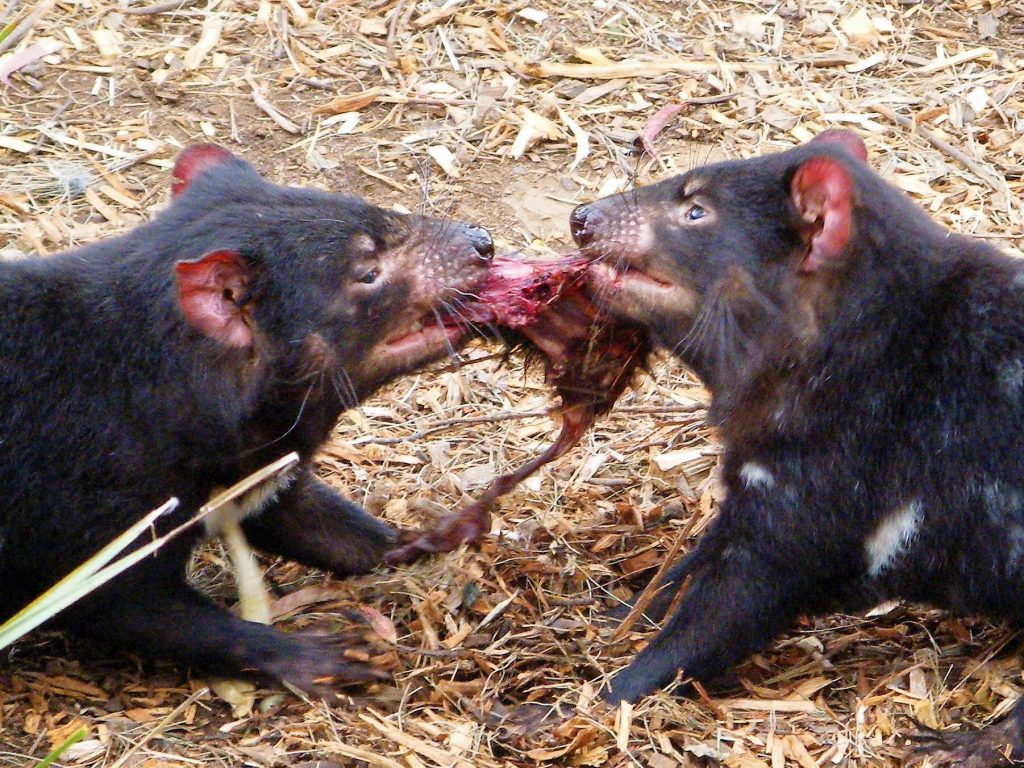 Bonorong, a half-hour drive from Hobart, is a sanctuary for rescued animals, some of which exist nowhere else on earth. You’ll see quolls, bettongs, echidnas, and endangered Tasmanian devils, the largest carnivorous marsupial. You can pet wombats and koalas, and feed kangaroos, but there’s nothing like watching a gang of growling devils rip apart chunks of meat. Their jaws are incredibly powerful.

Eats are available at the food hut, or you can bring your own. Just don’t feed any of the free-roaming critters human food—it could make them very ill. 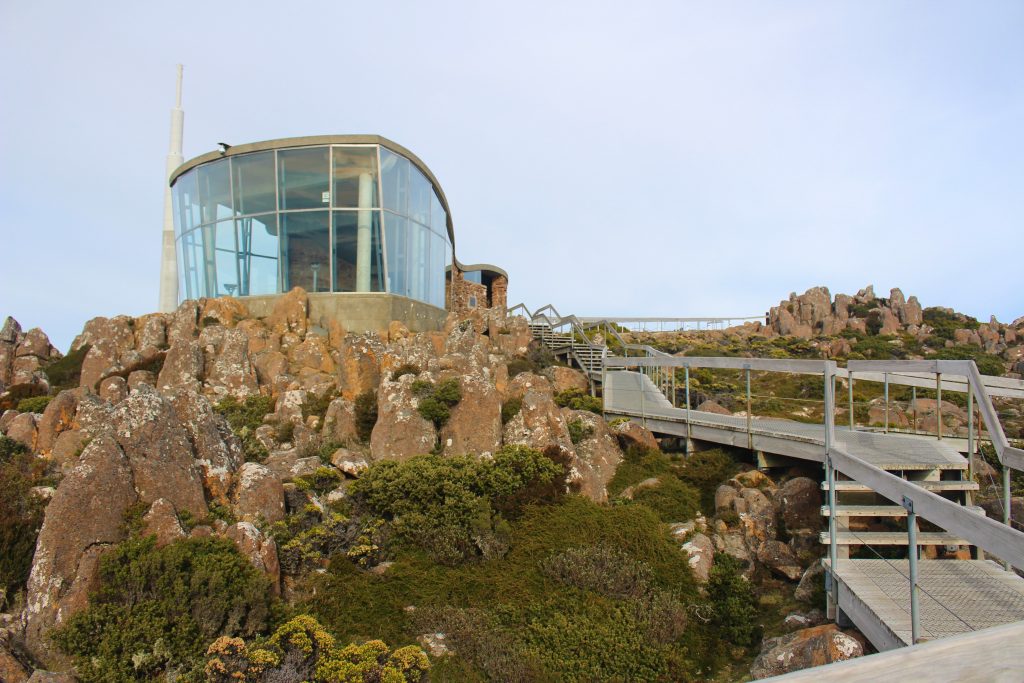 This forested mountain looms over Hobart and offers impressive views from its rocky summit. The Explorer Bus (leaving from Brooke Street Pier) will take you up Pinnacle Road to the observatory at the peak. If you drive yourself, be careful—the road is narrow and icy in winter. There are a number of hiking trails if you’re feeling especially rugged.

You’ll need a clear day for the view, but I’ve been on the mountain in thick fog and found it magical. When visibility is only a couple feet, anything could be in your path—a rock, a tree, a scurrying bandicoot…go slow and see what happens. 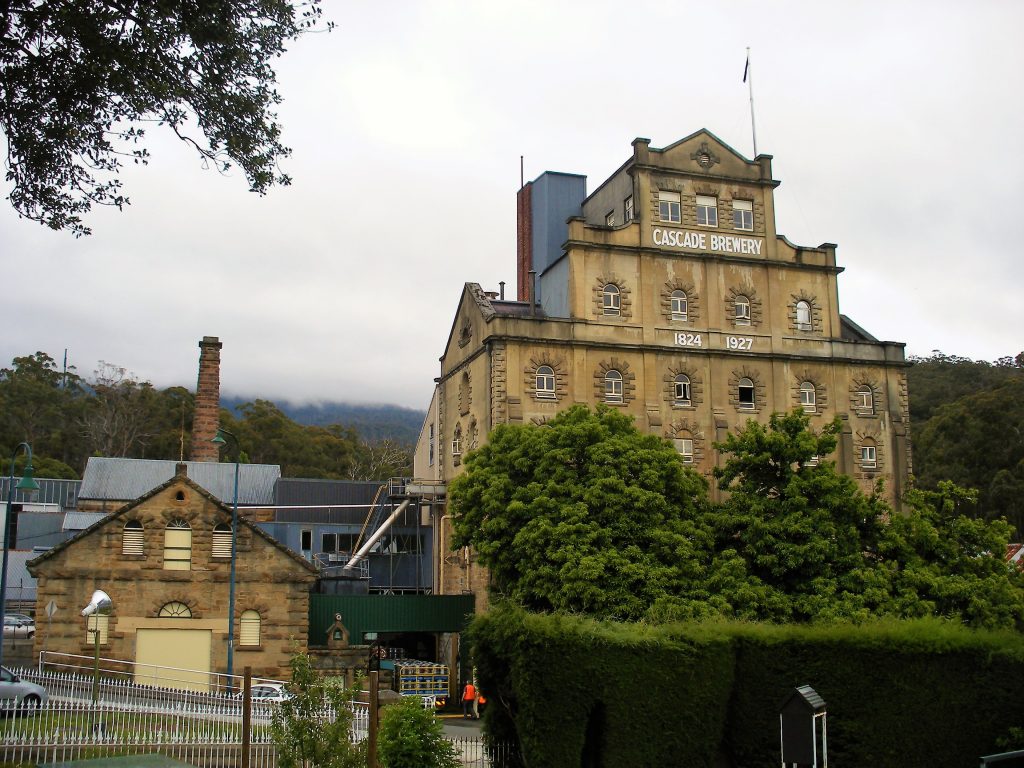 Australia’s oldest brewery has been crafting fine ales and stouts at the foot of Mount Wellington since 1832. A tour will take you through the whole process, starting with clear mountain water and Tasmanian hops, which are processed on-site.

Like all good brewery tours, this one ends with beer drinking. The brewhouse has all the Cascade varieties on tap, plus a replica Tasmanian tiger behind the bar, and gorgeous views of Mount Wellington. They serve locally sourced lunches, too. 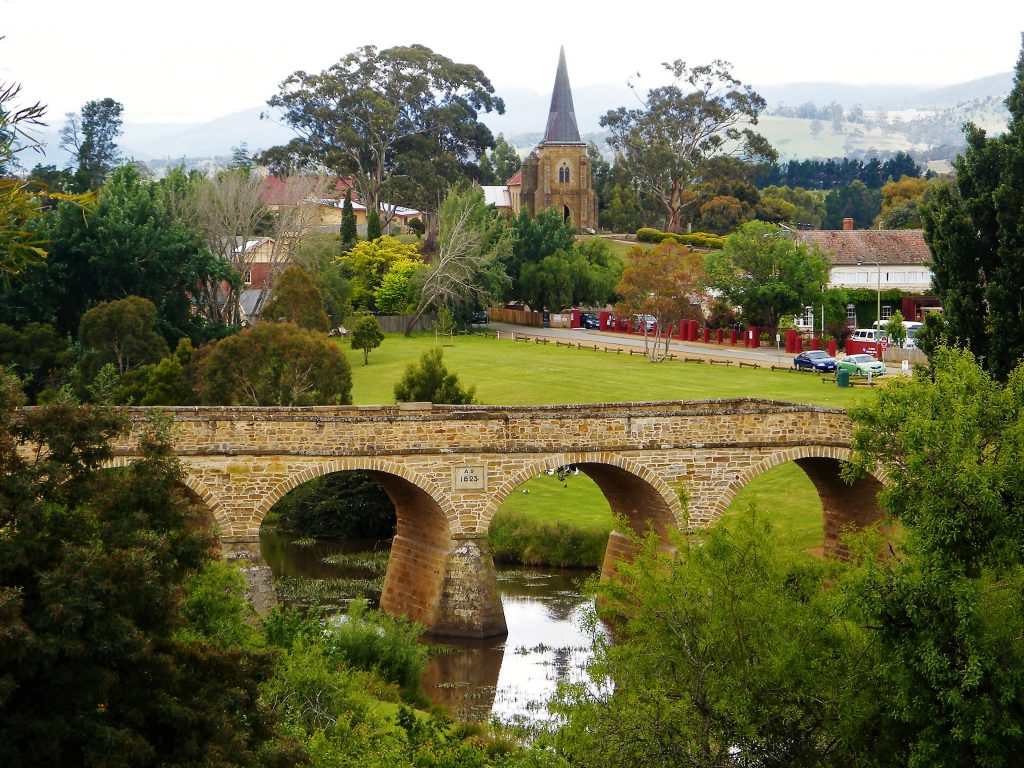 Richmond Bridge was completed in 1825 and, like many structures around Hobart, built by convict laborers using local sandstone. People (and ducks) flock to the riverside here. It’s hard to imagine a prettier place to spread a picnic blanket. 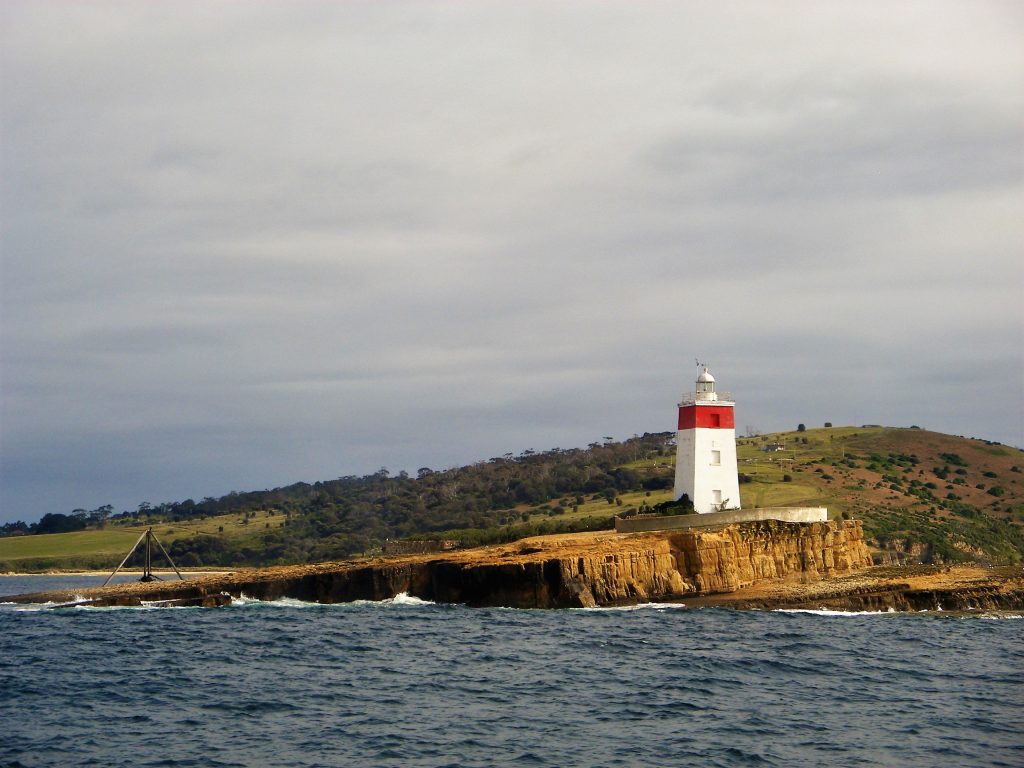 The name of Tasmania’s oldest lighthouse is a mystery. The distinctive square tower, dating to 1832, isn’t made of iron, but sandstone. The name actually comes from the small islet at the mouth of the Derwent Estuary on which the lighthouse stands. But why is Iron Pot Island called Iron Pot Island? Theories abound. The name could’ve been derived from pot-like depressions on the island’s stone surface. Or from oil-burning pots set up by whalers to warn ships of hazardous rocks.

We’ll probably never know, but as long as the lighthouse continues to guide ships from Storm Bay into the Derwent River, it will remain a Hobart icon. Landings on the island are notoriously tricky, so it’s best to view Iron Pot from the water. You’ll pass it if you take the ferry to Port Arthur, site of Tasmania’s most infamous prison. 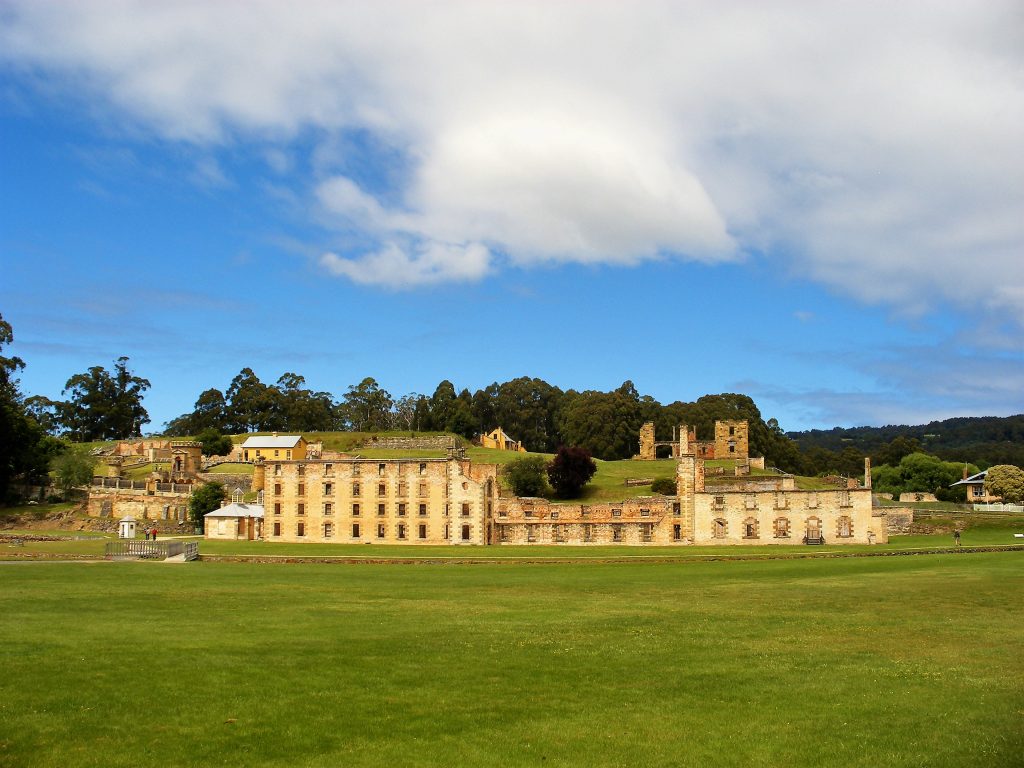 Port Arthur was founded as a timber station in 1830 and became a penal colony in 1833. This is where Britain’s worst offenders were sent. The abandoned prison, heavily damaged by bush fires in the 1890s, is now an open-air museum and UNESCO world heritage site. You can tour the remains of old cell blocks, the church, and lunatic asylum.

Port Arthur is surrounded by water and only connected to the mainland by a slim isthmus. Driving from Hobart takes about an hour and a half, but it’s more scenic to arrive by ship. The ferry will take you past Iron Pot Lighthouse and the fluted dolerite cliffs of Cape Raoul. If you’re prone to seasickness, watch the weather—this part of the Tasman Sea isn’t called Storm Bay for nothing.

When you run out of things to do in Hobart, consider branching out to explore more of Tasmania with this guide to Devonport.