Buenos Aires is known for its historic cafés and bars. These are the places where Jorge Luis Borges charted the course of Argentine literature over coffee; where Carlos Gardel crooned tango tunes; where Ernesto Sábato scribbled novel chapters in notebooks. They’re also the social centers of neighborhoods, the equivalent of a corner bar in the U.S. or local pub in Britain.

Establishments of particular cultural significance are listed as bares notables, a designation that protects them from gentrifying developers. At least that’s what I thought. It turns out, however, that bares notables don’t last forever. Since 2007, nine have closed, including the legendary Confitería Richmond (now a JFS sports store).

Don’t take the remaining classics for granted. Soak up some authentic porteño atmosphere in these 6 historic Buenos Aires cafés. 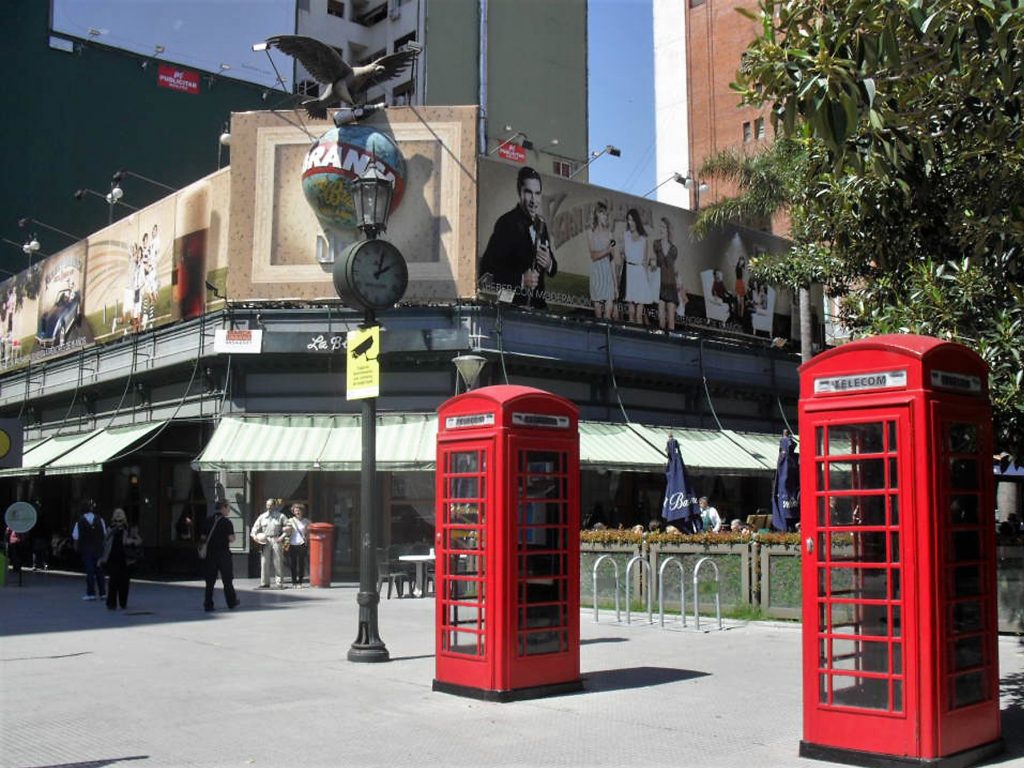 La Biela is the oldest café in Buenos Aires (1850). It got its current name (“The Crank” in English) during the 1950s when a bunch of auto aficionados congregated there. You’ll see all kinds of racing memorabilia on the walls; there’s even a statue of driver Oscar “the Eaglet” Gálvez out front.

Intellectuals also frequented La Biela, and there are wax figures of Jorge Luis Borges and Adolfo Bioy Casares inside. Other historic cafés in Buenos Aires do this too, so be prepared; it can be quite a shock to walk in and find a dead writer grinning at you. Living La Biela patrons include Francis Ford Coppola and Robert Duvall.

La Biela is a great place to cool off after a summer visit to nearby Recoleta Cemetery. I go inside for the AC, but you can sit outside, too. If you do, try to get a table in the shade. The La Biela salad, with shrimp, palm hearts, celery and green apples makes a nice lunch on a hot day. 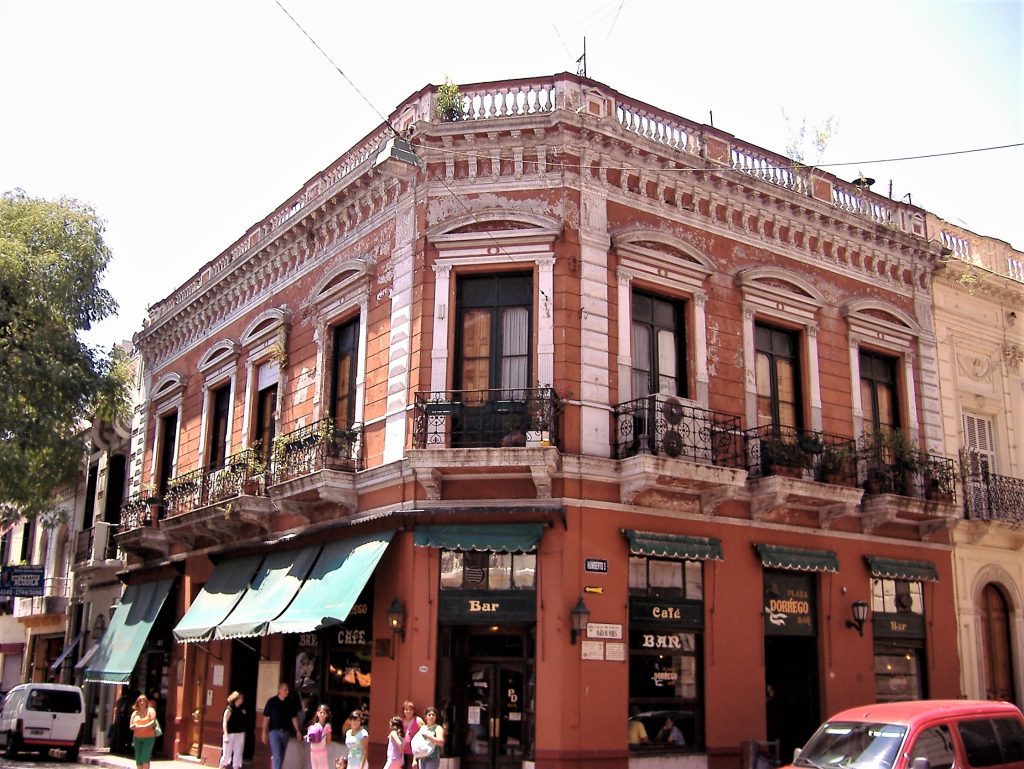 With its checkered floor, vintage espresso machine and black-vested waiters, this bar on San Telmo’s Plaza Dorrego is like a time capsule. It was originally known as Besio’s Grocery Store, and there are still drawers with labels like “Queso” and “Polenta” in the wall. The woodwork has been carved up over the years with declarations of love and other graffiti. Antique bottles are everywhere.

On Sundays, the Feria de san Telmo is held at Plaza Dorrego. Thousands of people show up for this sprawling flea market (nearly 300 tables), which features tango dancing and folkloric singers. If you want to enjoy a quiet coffee, don’t come during the Feria.

Food is a bit pricey here, but pretty good for a bar. Try the hamburguesa completa (full hamburger), which comes with a multitude of toppings. 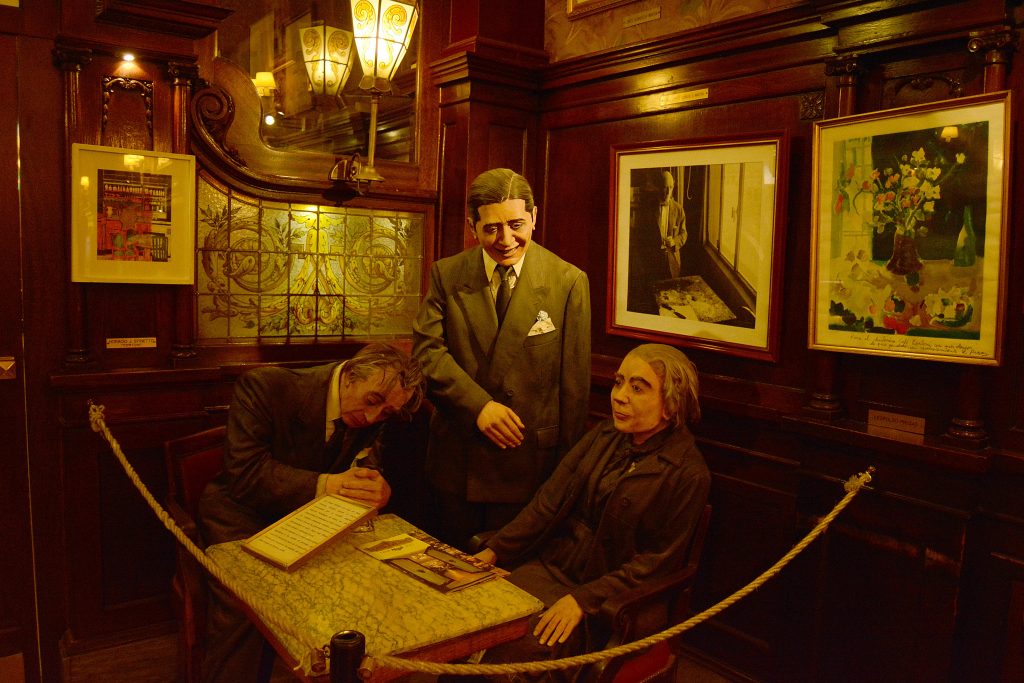 Café Tortoni is an institution on the Avenida de Mayo, and one of the primary stops for tourists in Buenos Aires. It’s been in business since 1858 and the décor (stained glass, walls jammed with paintings and caricatures, oak marble tables) has barely changed.

The Arts and Letters Association used to meet here in the 1920s. While these bohemians didn’t spend many pesos, they enhanced the Tortoni’s reputation as a cultural hotspot. A corner table is still reserved for artistes, but don’t expect to overhear any witty banter. Its three occupants (Jorge Luis Borges, Carlos Gardel, and poet Alfonsina Storni) are wax sculptures.

There’s a tango show in the basement; it’s fun and inexpensive. Grab a glass of cider (a Tortoni specialty) and settle in for a sultry display of Argentina’s most famous export. The tango was invented in the brothels and low dives of Buenos Aires, and the show’s characters are suitably louche. Scantily-clad prostitutes dip and turn with toughs in sporty fedoras. During one interlude a gaucho appears, swinging a bola and banging it rhythmically against the stage.

On the way out, stop at the small gift counter. There are some nice items, including coffee and teacups emblazoned with the Tortoni logo. 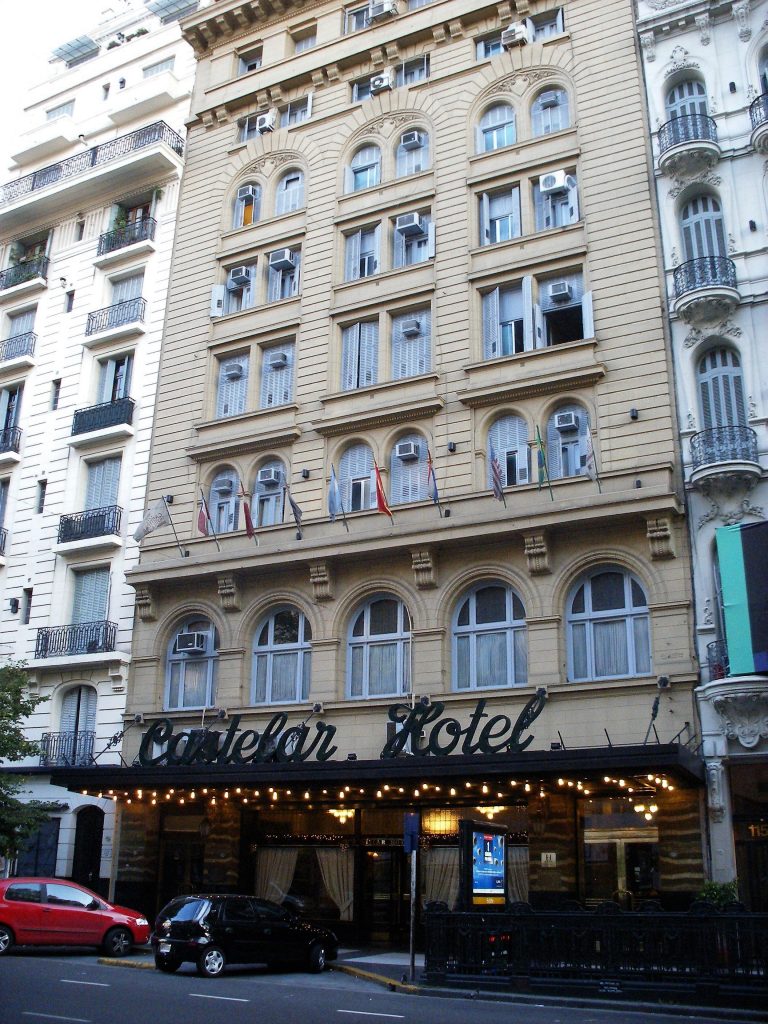 The Castelar Hotel opened in 1929 and was an immediate hit with distinguished writers. Spanish poet and dramatist Federico Garcia Lorca lived here for 6 months in the early ‘30s and his room (704) is now a museum.

The Castelar’s café was named a bar notable in 2004. Numerous local literary stars drank here, including, of course, Jorge Luis Borges. Borges went blind at the age of 55, but it didn’t seem to curtail his café-going. There aren’t many historic bars in Buenos Aires that don’t claim him as a regular.

A breakfast buffet is set up in the morning for hotel guests, so afternoons and evenings are better times to visit the café. It’s wonderfully preserved, with lots of marble and old wood. 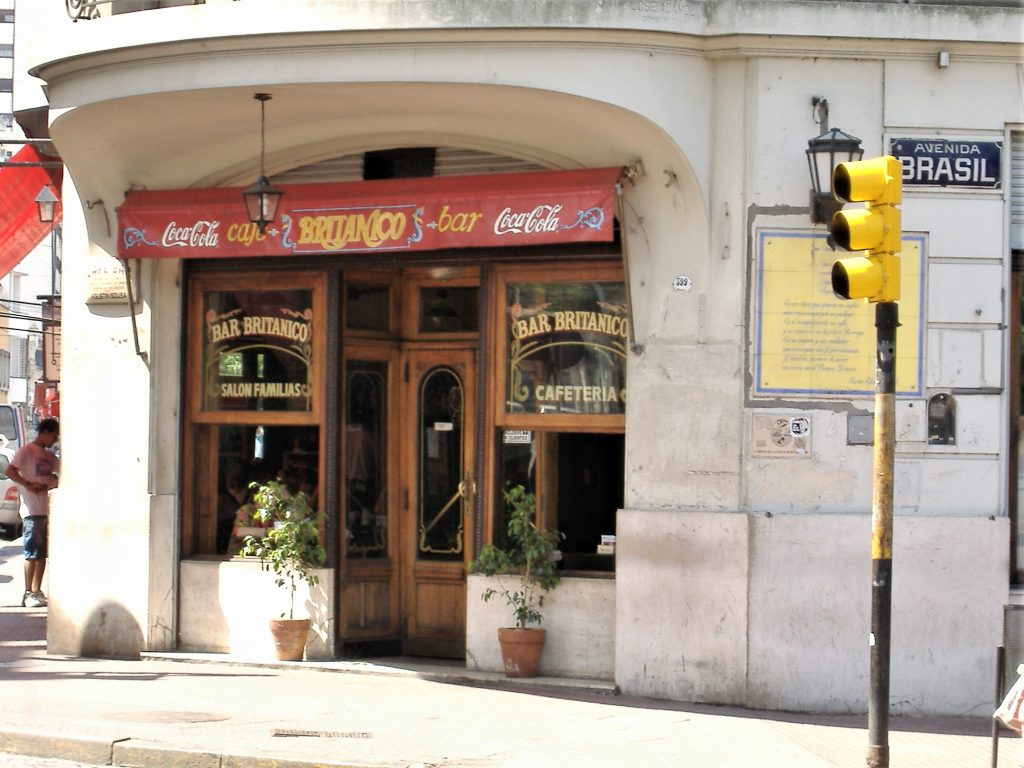 This beloved dive bar on Parque Lezama in San Telmo was a popular meeting spot for railroad workers and other Brits in the 1930s. In 1959 three Galician immigrants took over the operation and ran it for nearly 50 years. During their tenure, Bar Británico became known as a hangout for writers like Ernesto Sábato, who wrote parts of his novel On Heroes and Tombs at a window-side table.

Since new management replaced the three Gallegos, some improvements have been made. The plumbing is better, and the missing floor tiles have returned. But don’t worry—the same old locals are still there every morning, reading their newspapers. A steady stream of cinema fans keep the Británico busy as well, thanks to its appearance in the Gael García Bernal movie The Motorcycle Diaries. 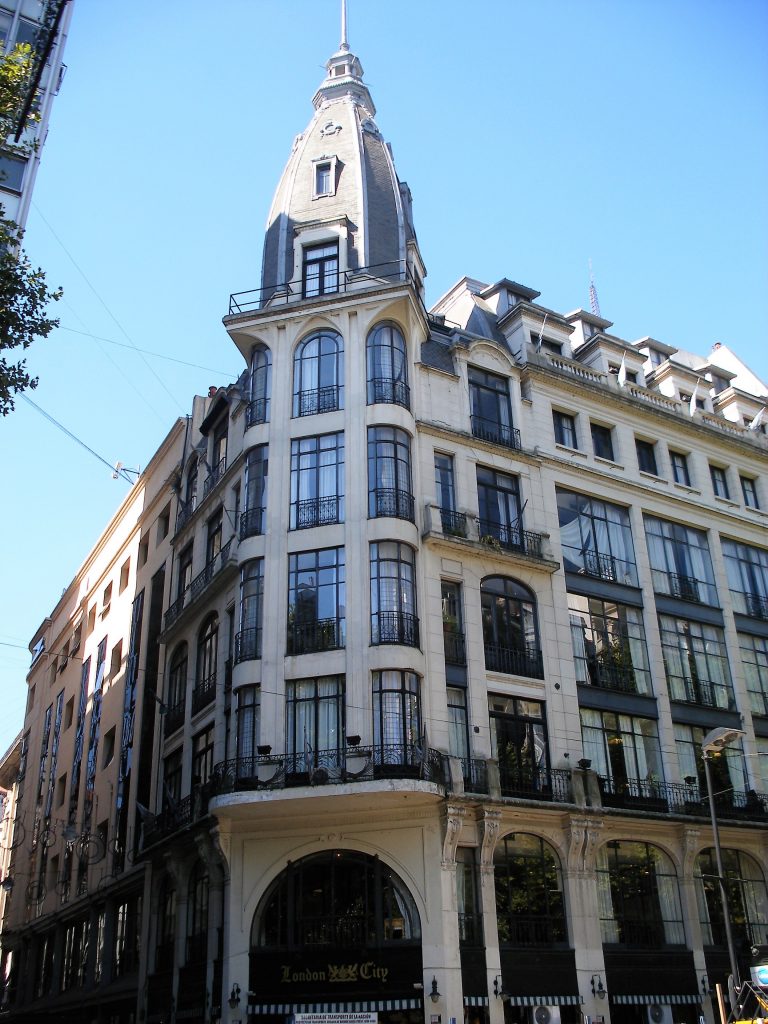 I was inspired to seek out this café after reading Julio Cortázar’s 1960 novel The Winners. Cortázar wrote the book in London City, and set its opening scene there. 18 people, a cross-section of Buenos Aires society, are invited to the famed café on the corner of Avenida de Mayo and Peru, where they’re told they’ve won berths on a mysterious pleasure cruise.

London City opened in 1954 and attracted literary types, politicians and journalists from the neighboring La Prensa newspaper. A recent restoration has brought back the swanky gleam of its heyday, but don’t try lighting up a sophisticated cigarette à la Cortázar. Buenos Aires cafés have been smoke-free since 2012.

Lots of fantastic sweets and pastries are available, including a chocolate high-heel shoe!